In this season of memories, we've brought to you an unseen family picture featuring Sridevi and her infectious smile, alongside her little birds, Janhvi Kapoor and Khushi Kapoor!

A surge of shock had engulfed the whole nation on February 24, 2018, when the news of the legendary actress, Sridevi's unfortunate demise had broken out. No one could believe what had happened and people were vainly trying to get a grip on the situation. Such was the impact of this superstar's demise on the nation. The demise of Sridevi had created a void in the Kapoor family that can never be filled. Not a single day goes by when they don’t remember her. Scroll further to check out an unseen family picture of Sridevi! (Recommended Read: Janhvi Twins With Sister, Khushi In A Saree, Holding 'Amma' Sridevi's Hand In This Childhood Picture)

In one throwback picture with her mother and sister, Janhvi had revealed that she had hated sharing her mother’s cuddle with her little sister, Khushi. On May 11, 2020, Janhvi had taken to her Instagram stories to share a throwback picture from her childhood, where a little Janhvi could be seen riled, sitting two benches behind her mother, Sridevi and sister, Khushi. In the picture, Sridevi could be seen cuddling Khushi while they both posed for the camera and it seems this was a reason enough for Janhvi Kapoor to feel annoyed. Sharing the picture, she had written, “TBT to when I didn’t even want to share mummas huggies with Khush” atop it. 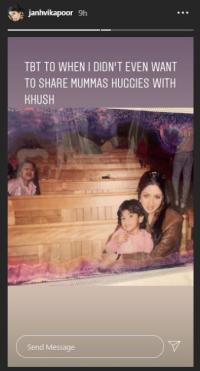 Surfing social media, we stumbled upon a priceless gem of a beautiful memory froze in a frame! In an unseen happy family picture of Sridevi ji with her family, the happiness and content in her can be clearly seen in her eyes. Little Janhvi and Khushi can be seen posing, standing on either side of mummy and daddy, while Sridevi had possed with utter grace, sitting and holding onto her husband, Boney Kapoor. Sridevi is looking absolutely gorgeous in a pink saree, with sleeked back neatly, wearing her infectious smile. The little birds, Janhvi and Khushi had posed elegantly for the camera following the footprints of their graceful mother, and an ever-smiling Boney Kapoor stood at the back! Take a look at the unseen picture below:

Sridevi has left behind a legacy in her daughter, Janhvi Kapoor and Khushi Kapoor. And they're carrying it gracefully forward, making their mother proud. In an interview with the Filmfare, Janhvi Kapoor had opened up about donning the responsibilities and becoming the lady of the house post her mother's demise and had stated, “I don’t think I have become the lady of the house because I'm very childish. But during this lockdown, I'm understanding how much people at home depend on me a lot more. Because I haven't been home this much for the past 2 years. Now all of sudden I'm keeping track of what Papa is eating, or why Khushi is sleeping so long, and how they are going to get vegetables and if they are sanitizing everything properly or what the protocols are. I was thinking If I wasn't here I don't know what would have been happening. I think they would have managed. I think the responsibility has just dawned on me that they do depend on me a bit." (Also Read: Bhagyashree Had Warned Salman Khan To Maintain Distance To Avoid Link-up Rumours Between Them) 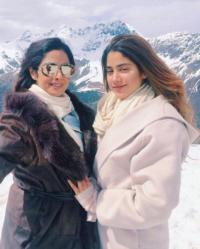 Sharing an uncanny resemblance to her late mother, Sridevi, Janhvi often faces comparison between her and her mother, in terms of looks, fashion sense, career graph and a lot more. At times, these comparisons are encouraging, at other times, they can be devastating as well. In an interview with the Hindustan Times, Janhvi Kapoor had remarked on the constant comparison with her late mother. When asked if she feels the pressure to match up to her mother’s stature, Janhvi had said, “I think people need to accept that I’m a different person from my mother. There’s a section of society which has been able to do that with Dhadak, but there are people who couldn’t make that differentiation and they still look for Sridevi in me. Maybe after more of my work comes out, they’ll understand I’m a different type of actor and I’ll make different choices.” (You May Also Like: When Amrita Singh Had Blushingly Sang 'Tum Aa Gaye Ho' For Saif Ali Khan, His Reaction Was Priceless) 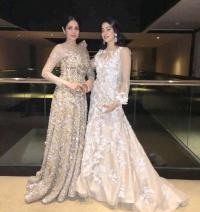 What do you think about these comparisons drawn between Sridevi and her daughter, Janhvi Kapoor?