It has been over five years since one of India’s most talented fast bowlers, Shanthakumaran Sreesanth was banned from cricket for life by the BCCI after he was under the scanner for spot-fixing allegations in the IPL 2013 and was imprisoned. However, destiny had some other plans in store for him. And just like a phoenix rise from the ashes, Sreesanth explored his career options and made his way into acting after he was let off by the courts from cricket.

Recommended Read: 15 Stunning Wives And Girlfriends Of Star Indian Cricketers Who Would Make You Weak At The Knees

Sreesanth has been a controversy’s child throughout his career, and as tragic his professional life was, more interesting was his personal life. Before getting married to the love of his life, Bhuvneshwari Kumari, Sreesanth had an interesting love life that too hogged the spotlight. Let’s take a look at Sreesanth’s extravagant love affairs, and it is definitely worth a read: With nearly 17 years in the showbiz world, Shriya Saran has time and again proved with her commendable performances that she is irreplaceable. In 2008, Sreesanth and Shriya did a fashion show together in Mumbai, post which they were spotted on a dinner date and left in the car together. Soon the rumours about their affair started doing the rounds. But Shriya denied the rumours of her being in love with Sreesanth. She had stated:

“Sreesanth and I are brand ambassadors for an upmarket product. Yes, we were there at a party together, but I barely spoke to him for five minutes. And, I was just being sweet. I don’t even know him yaar!” 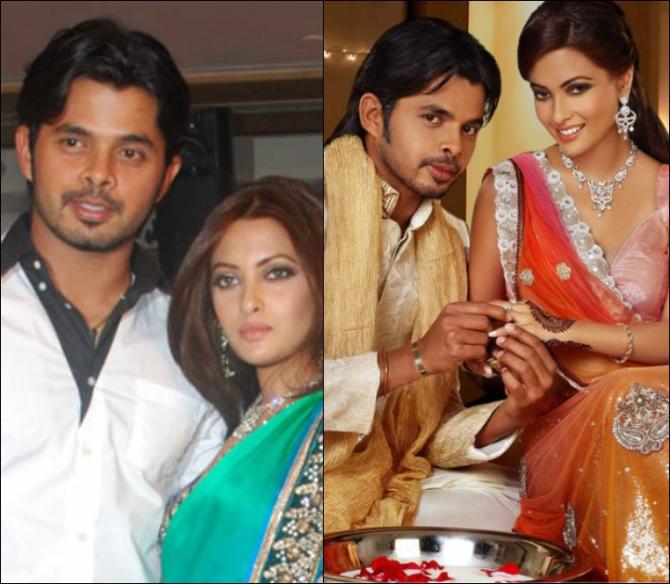 Daughter of the superstar, Moon Moon Sen and granddaughter of the legendary actress, Suchitra Sen, Riya Sen has beauty and talent flowing in her genes. Riya, not only bowled one but two cricketers with her magnetic personality and reputation, Yuvraj Singh and Sreesanth. After she broke up with Yuvraj, Riya met Sreesanth at one of the splashy Page 3 parties and the duo were inseparable, post that. In some of the matches of Sreesanth in the year 2011, Riya was spotted in the VIP stands. At a given point of time, the grapevine even suggested that Riya and Sreesanth are ready to enter the holy bond of matrimony, but well, it happened otherwise. Riya and Sreesanth dated for a year, but she later distanced herself from him after he was mired into a series of controversies. Riya denied all such speculations about her link-up with the cricketer, and had tweeted:

“Guys please! I am not dating Sreesanth! I just attended three matches for Kochi and that's that. It was work! So, rest your imaginations.” 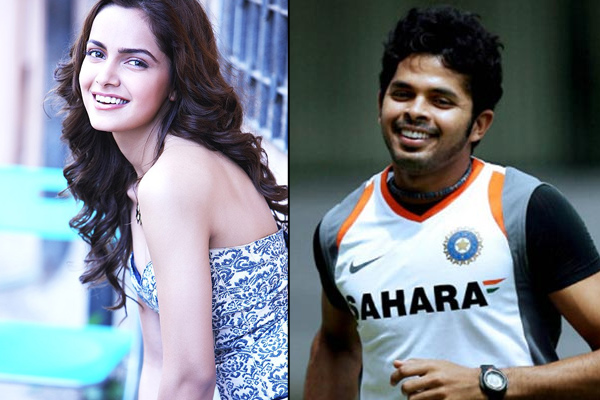 In 2011, after dating Riya Sen, Sreesanth painted the town red with his much-talked about affair with the Rocket Singh: Salesman of the Year fame, Shazahn Padamsee. Then-newbie in Bollywood, Shazahn is the daughter of singer, Sharon Prabhakar and theatre personality, Alyque Padamsee. With her comments about Sreesanth, claiming him to be “sweet”, their fans couldn’t help but read between the lines. As per Mumbai Mirror reports in April 2011, a source had said:

"Shazahn and Sreesanth have gone for a drive in South Mumbai. They are sitting pretty close."

Talking about her relationship with Sreesanth, Shazahn had earlier shared:

“We are just good friends. I am single.”

“Please stop linking me. I am single and working hard on getting better on my game and I am loving my life.” Raai Laxmi, who predominantly works in Tamil and Malayalam as well as Telugu and Kannada films and has made her Bollywood debut with the 2017 film, Julie 2, was also rumoured to be in a relationship with Sreesanth. But Sreesanth went into denial with this link-up as well. He was quoted as saying:

“Being a celebrity comes with its own share of troubles. People need to know me before they judge me. I really don’t understand why I get linked with actors. I am just a little friendly with them, but that’s what gets me into trouble. The truth is, none of the actors I have been linked with — Surveen Chawla, Lakshmi Rai and even Priyanka Chopra — have been my girlfriends.”

But Sreesanth also admitted that he used to visit Lakshmi Rai on her sets. He further added:

“I happened to visit Lakshmi Rai on the sets of her Kannada film, and before you knew it, the tabloids called us an item. I have grown up in a progressive city like Bangalore, and I’ve always found it easier to get along with girls. But, I am single, very ready to mingle.” The Indian reality dance series, Ek Khiladi Ek Haseena played the Cupid for Surveen and Sreesanth. They became good friends during the show, and their bond churned the rumour mills of romance that was brewing between the two. With Sreesanth’s involvement in the spot-fixing scandal, Surveen was very sad and disappointed. She was quoted as saying:

“The lure of money can make the sanest people go astray. I wouldn't be lying if I say that I am sad and disappointed with what Sreesanth did. I'm not going to mince words here, had it been a good friend or an acquaintance, my stand on the issue will be the same. While we are friends, I have not been in touch with him recently. I've always seen him as a person who has inspired people from Kerala to take up cricket. I was in Cannes when learned about his arrest; it was shocking.”

As per the reports, when Surveen took a career shift from television to the silver screens, Sreesanth called her on the sets of the film to end their relationship. According to the reports, a source from the film unit revealed:

“Surveen was doing her shots and she got engaged in a conversation over the phone with Sreesanth. People who were close to her could overhear her and it was clear that the two were calling off their relationship. Surveen wants to be a successful actress and wants to be motivated about her career now more than anything else.”

And when Surveen was contacted about the same, she commented:

“All I want to say is that it’s my personal life and I want to focus on my career. I have milestones to cover, so all this can take a backseat.” 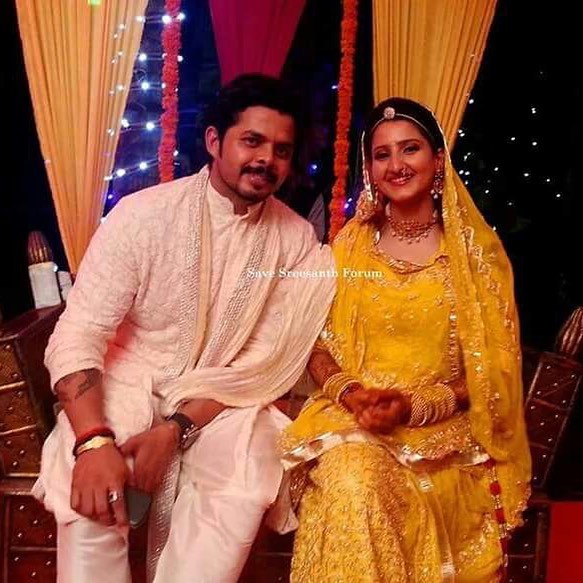 And finally, Sreesanth got married to his long-time girlfriend, Bhuvneshwari Kumari of Jaipur's Shekhawat family at Guruvayur Sri Krishna temple in Kerala. Bhuvaneshwari is a jewellery designer and a real-life princess. Speaking about his wife in an interview, Sreesanth was quoted as saying:

"My wife has always been a support system to my family and me. Even before the controversy she was always in touch with my family. When I was injured and I was out of cricket for 18 months, she was constantly in touch with me. She used to mail me songs, modulations and stuff. So I should say, it was a very nice gesture by her towards me and my family."

Further commenting on the controversy and how their marriage happened, he revealed:

"It was love at first sight for me but she was a school girl for me. It was only after I realised her care and concern for me, I fell for her. Because we don't get love and care from all the people we stay around with but fortunately, I fell in love and eventually got married to her even after going through the tough situations. We were anyways going to get married in September 2013 but I was doubtful whether I should get married or not after the controversy that happened. But fortunately, her family came down to Kochi and told us that we are going ahead with the marriage. I think that is the toughest situation for any girl to accept the proposal and get married." When asked whether they had a love marriage, Sreesanth replied:

"My mother decided that I should settle down in life and live life rather than dwell in the past. Mine was not a love marriage completely. It was a love which was arranged by both the families. We never proposed to each other. We never not holding hands and walking around. I remember holding her hands for the first time during our wedding. It was only when her father gave her hand in my hand during some ritual before, that my love story was like a 1942 love story.”

How her wife was the constant pillar of strength for him, Sreesanth remarked:

"I started falling for her after my surgery in 2012 because I was on the wheelchair for almost two months and was on clutches for two months and my cricket contract also ended. And Bhuvaneshwari was the one who encouraged me and said that you should do what you like to do in life and was always there for me. She always messaged me that you can still play cricket and I was like I have two world cups and I can't play cricket. But she always supported me. Finally, in 2013 we decided to get married." Shanthakumaran Sreesanth finally found the love of his life and is now a happily married man. Sreesanth and Bhuvaneshwari embraced parenthood for the first time and on May 9, 2015, with a baby girl, Sree Sanvika and then for the second time on November 22, 2016, with a baby boy, Suryasree. With the arrival of Sreesaanvika and Suryasree, Sreesanth and Bhuvaneshwari’s family got completed, and they are the doting parents to these munchkins.

Next Read: 13 Indian Cricketers And Their Adorable Kids Who Are Media Sensation Just Like Their Parents