Actress, Priyanka Chopra's decision to marry American singer-songwriter, Nick Jonas, who is ten years younger than her was questioned by many people. The duo was also brutally trolled for their age difference, but at the end of the day, what matters is that she is happy. After getting married to Nick, she got a family full of brothers-in-law and sisters-in-law, who have accepted her wholeheartedly.

It was during her wedding to Nick Jonas that we got to know that American singer-songwriter, Joe Jonas is going to be PeeCee's brother-in-law. To be honest, the entire Jonas family with their four sons and their beautiful wives gives us a feeling that they are a Hollywood adaptation of Hum Saath Saath Hain. Her in-laws had enjoyed to the fullest at Priyanka and Nick's Jodhpur wedding. 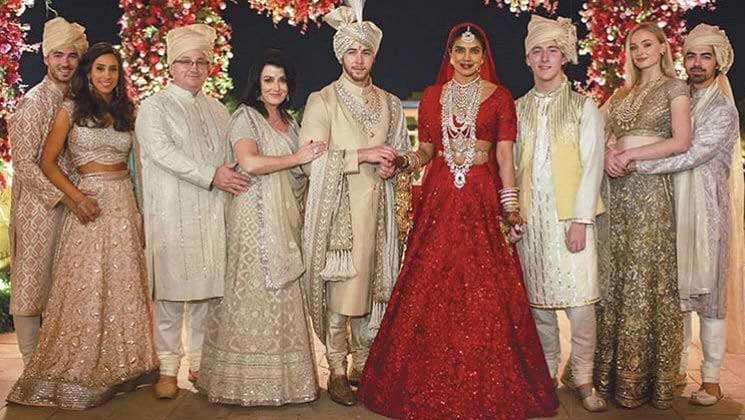 The Game of Throne star, Sophie Turner and her husband, Joe Jonas have completed two years of marital bliss. On July 1, 2019, the duo had tied the knot in Paris, and a few hours ago, Sophie Turner took to her IG handle to share two posts from her Paris wedding. Alongside one picture, the doting wife expressed her love towards her husband and wrote, "2 years as your wife holy moly I love you bub." On the other hand, while sharing another monochrome picture, she captioned it as "I mean… f**k it, it’s been 2 years." 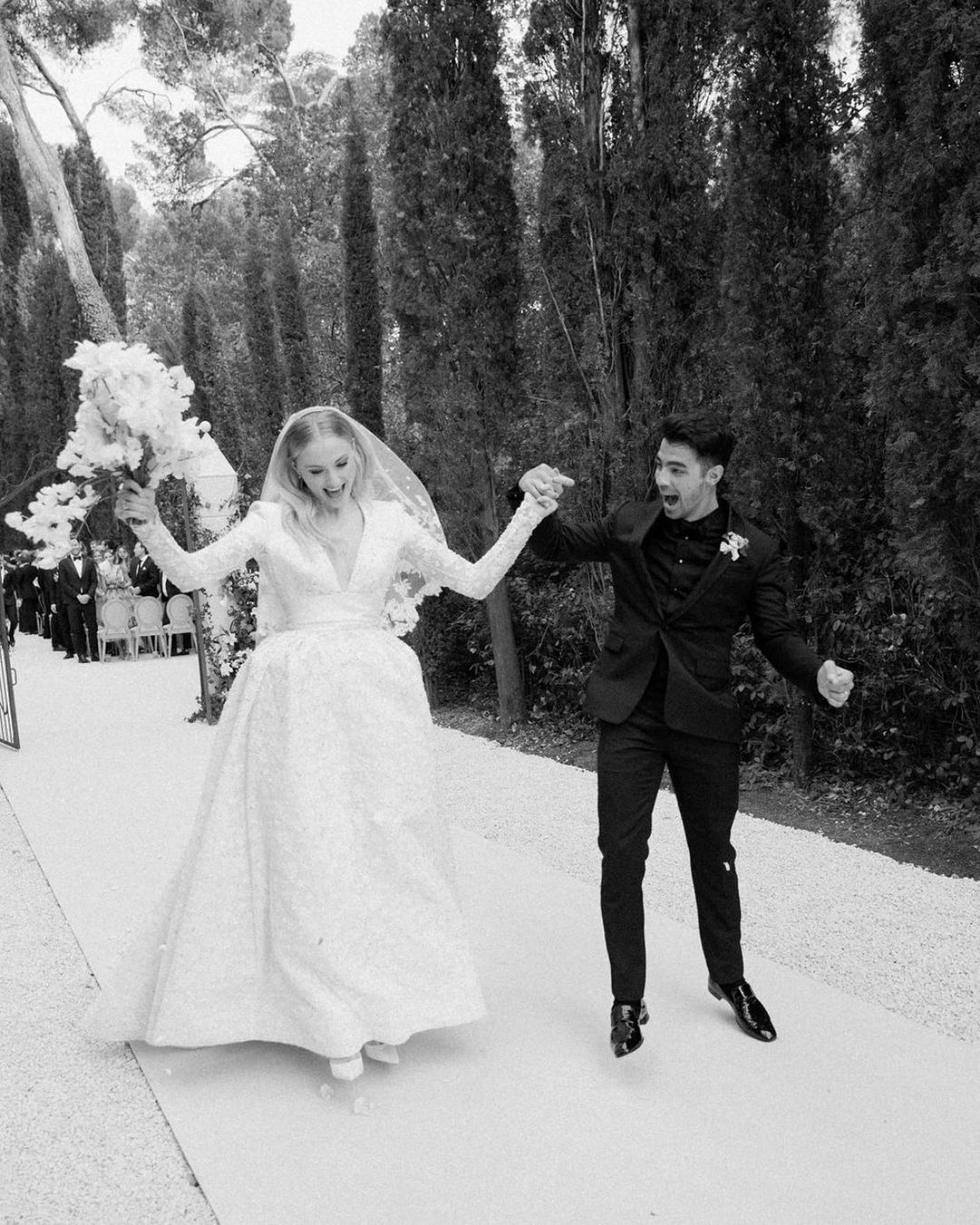 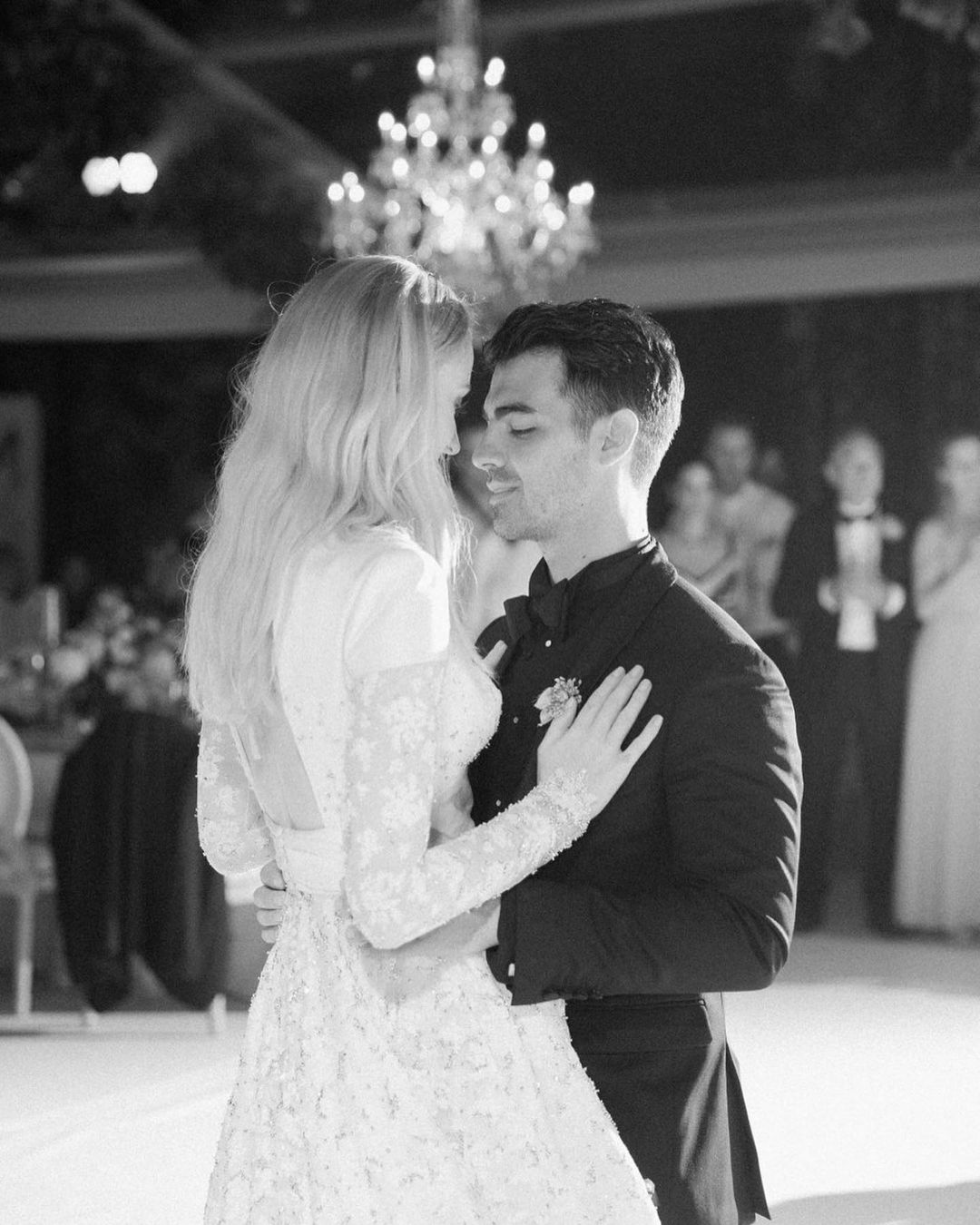 As soon as Sophie Turner shared the pictures, her sister-in-law, Priyanka Chopra was quick enough to take to the comments section to shower her love on the duo. She dropped a red heart and a raising hand emoticon on the post. Priyanka also took to her IG stories to share a throwback picture of the duo and wished them on their second wedding anniversary. Atop the picture, she wrote, "Happy Anniversary love birds! @sophiet @joejonas."

Suggested Read: Anupam Kher On His Wife Kirron Kher's Cancer Treatment, Says 'I Can Only Be Positive And Optimistic' 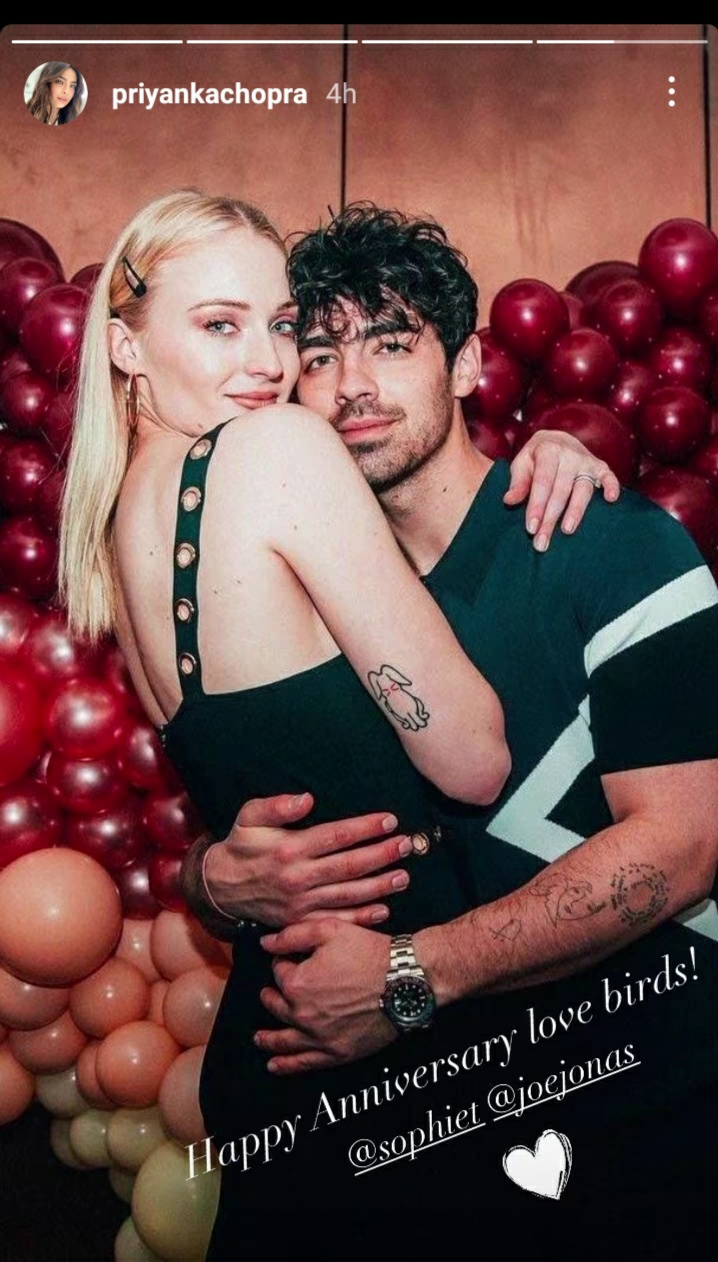 Sophie Turner and Joe Jonas got hitched in 2019, in an impromptu ceremony at a chapel in Las Vegas. The duo had exchanged their candy Ring Pop wedding bands after the Billboards Music Awards. Joe Jonas also took to his Instagram handle to share two posts expressing his love for his beloved love. In the first post, Joe wrote, "The best two years of my life. Love you @sophiet." In another post, Joe dropped a series of throwback pictures from the wedding and shared with his fans that the last two years have been amazing because of Sophie. He captioned the pictures as "2 Years Of Party Times." His doting brother and Priyanka Chopra's husband, Nick Jonas also took to his IG stories to reshare a picture of the couple, atop which he wrote, "Happy anniversary guys! Love you!" 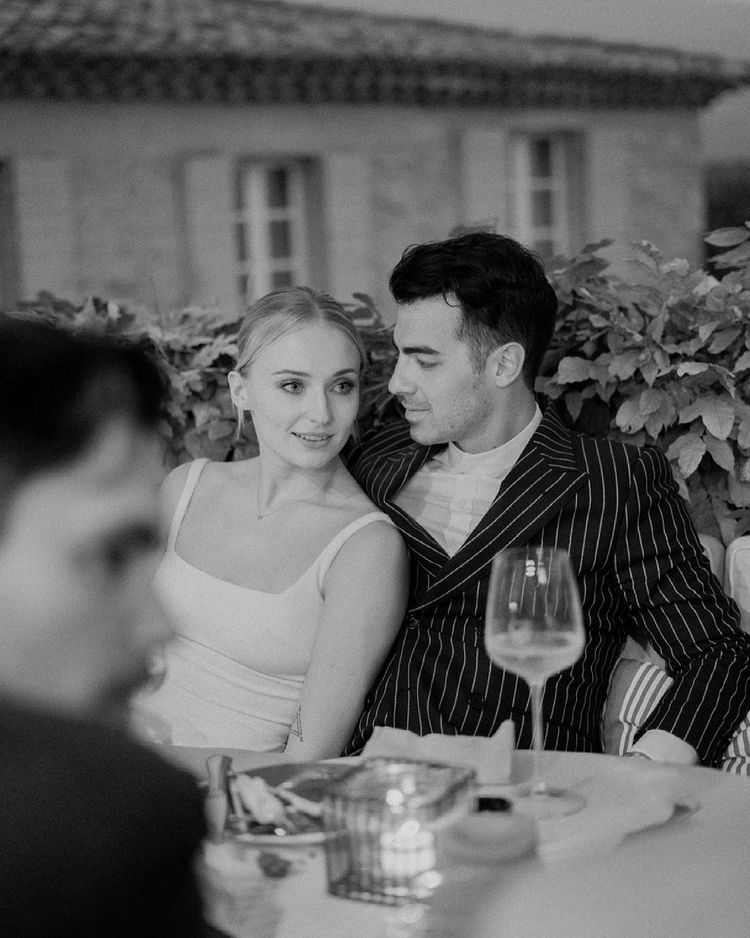 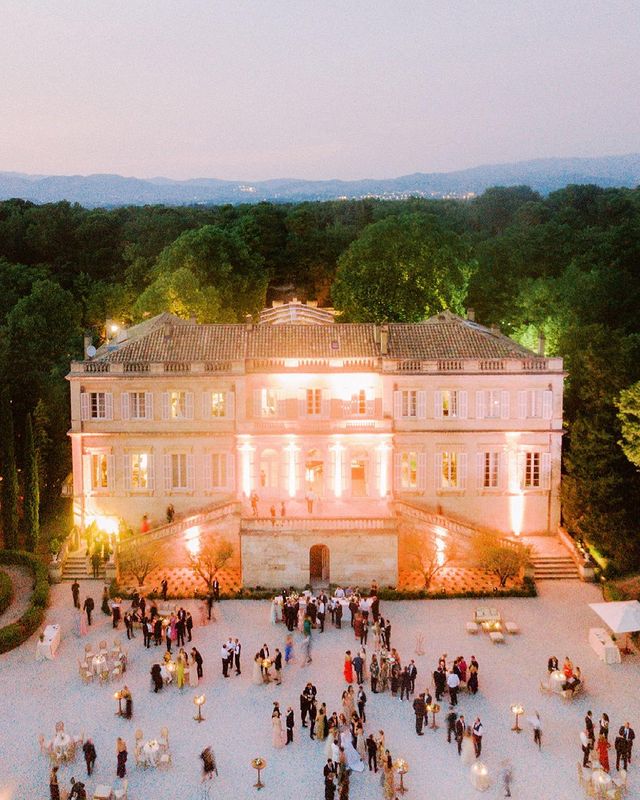 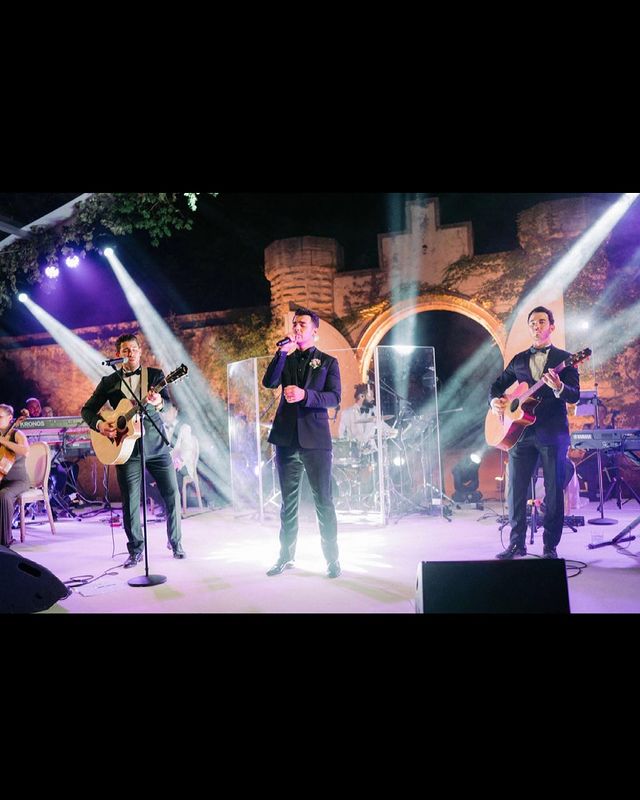 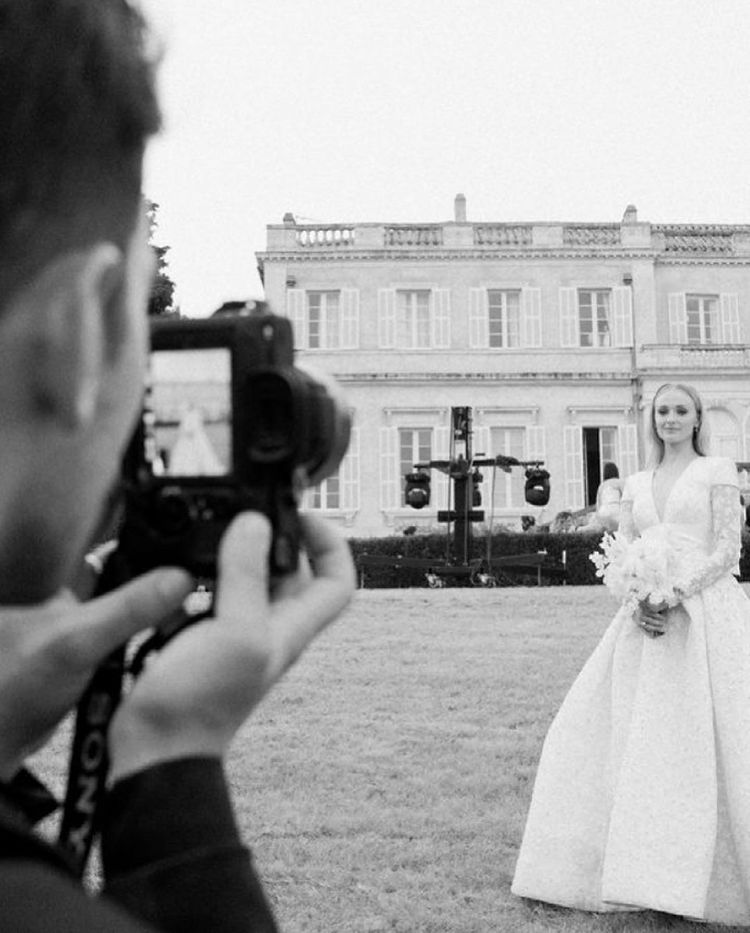 NEXT READ: Most Expensive Things Owned By Priyanka And Nick Jonas: From Luxury Mansion To Rolls-Royce Ghost 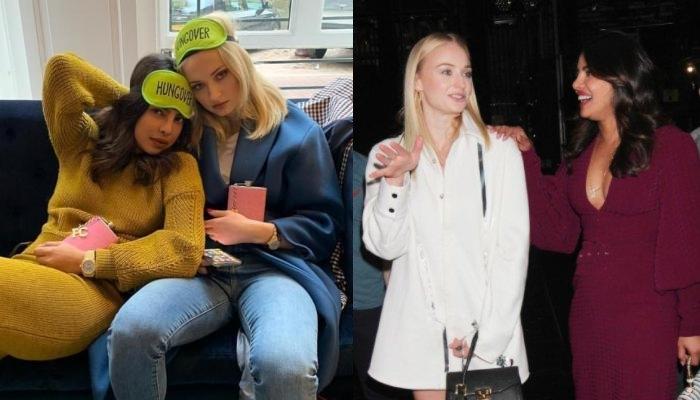