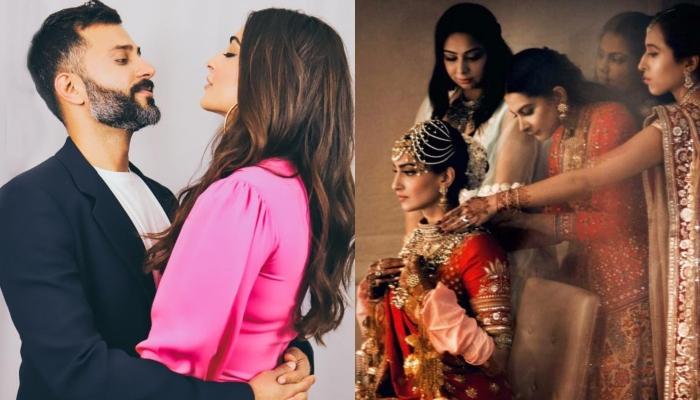 The little things you do in love that no one else could do id what that makes your story different from others! All those little things start making sense, cute texts, holding hands and kisses on the forehead. Well, that’s exactly what happened with Bollywood’s fashionista, Sonam Kapoor when she first met Anand Ahuja the connected in a blink of an eye and the rest is history. (Recommend Read: Hina Khan's BF Rocky Jaiswal Bakes Cake For Her On Valentine's Day, Lovebirds Dance The Night Away)

While this is Sonam’s first Valentine’s Day as Mrs. Ahuja, the actress didn’t leave a chance to wish her girlies. She took to her Instagram handle and shared a beautiful post for Galestine Day. Along with the picture she wrote, “Happy Valentine’s Day to my soulmates ... we will always have each other. #galentinesday #valentinesday #broseff @samyuktanair @shehlaa_k @rheakapoor @karishma ! @aartishetty is missing here.. but love you the same.” 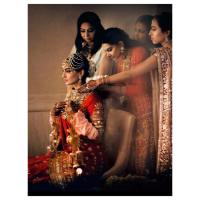 Sonam also shared a mesmerising picture with husband, Anand and captioned the picture as, “Happy Valentine’s Day my love... I miss you and I’ll see you soon... @anandahuja @jasonfisher #everydayphenomenal.” Take a look at it here: 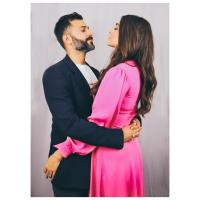 Sonam, who appeared as a guest on The Kapil Sharma Show for the promotions of her film, shared an interesting story of her husband, Anand Ahuja. The actress revealed that post her wedding with Anand, she was wearing choodas which left her husband clueless about the tradition he had no idea about. Anand reacted by saying, “What are you wearing”. Sonam then told him about the tradition, following which, Anand asked her to remove it, as they were not going with Sonam’s outfits. (Also Read: Sunny Deol Emotionally Shares His Son, Karan Deol's Debut Film's Poster, 'Pal Pal Dil Ke Paas')

Well, Sonam ki shaadi saga didn’t end there, the actress shared another instance from the wedding which was about the joote chupane ki rasam. She revealed that when she and her friend, Swara Bhaskar planned to hide Anand’s shoes, Anand played smartly and fooled Swara into stealing his brother’s shoes. However, Swara did manage to get money from Anand as a part of shagun.

Earlier, in an interview with Vogue, Sonam had revealed the first date details. The actress said, “I was apparently wearing the worst sneakers he had ever seen. I keep telling him that he fell in love with me despite my bad sneaker game… That day, walking and talking in London, I knew he was the love of my life. He apparently knew the first time we spoke on the phone… It was just so easy”. (You May Also Like: Kapil Sharma, On Valentine's Day Reveals Why Wife Ginni Is The Best Partner He Could Have Asked For)

In the same interview, Sonam talked about her love story with Anand, she had quipped, “He makes clothes—and I wear them!” She further added, “He comes from a business background, so that’s alien to me. I’m the third generation in a film family. So there’s a lot to talk about, a lot to discover about each other, but we have a lot of similarities.” Sonam also shared the qualities of her husband, and said, “He’s non-judgemental—with everybody. Very open-minded and progressive. I’m a little conservative and close-minded about a few things, and he’s taught me to see the other side, to look at things with a lot more compassion and care, to be a little more pragmatic and practical, as I can be very emotional and quick to judge sometimes, which is not nice”

In another interview, Sonam had shared the details of her Anand’s name change. She said, “Anand and I had a very long conversation you know, and we obviously want to have kids eventually, and he had this one friend who had a very long name, his mother’s name, father’s name, blah blah blah. I said, see anyways it’s a patriarchal concept, I have my father’s last name, I don’t have my mother’s name, and I want to be part of your family as well, and he wanted to be a part of mine”. Sonam also talked about life after the wedding and how it had changed, and stated, “It’s the same thing. Life doesn’t change much after marriage. It doesn’t change for a man. So, why should it be different for a woman where work is concerned?” (Don't Miss: Dipika Kakar's Sweetest Valentine's Day Wish For Shoaib Ibrahim, Calls Him The Love Of Her Life)

So, are you celebrating Valentine's day or Galestine's day like Sonam Kapoor?