Sonam Kapoor Ahuja Kept Her Pregnancy A Secret For 4 Months, Here's When Her Baby Will Arrive

Bollywood actress, Sonam Kapoor Ahuja, and her husband, Anand Ahuja, are all set to embrace parenthood with the arrival of their first baby. Check out when the actress will deliver her child!

Bollywood actress, Sonam Kapoor Ahuja and her hubby, Anand Ahuja had delighted their massive fanbase by announcing the good news of their pregnancy on their respective social media handles. It was in May 2018, when Sonam Kapoor had decided to tie the marital knot with her then-boyfriend, Anand Ahuja, and now, after more than 3 years of marital bliss, the couple is all set to embrace parenthood.

There have been instances in the past when speculation has been rife that Sonam is in the family way, but so far those all proved wrong. For instance, Sonam's pregnancy rumours were rife when she was spotted at her sister, Rhea Kapoor's wedding. Her outfit choice had led the netizen to think that she was hiding her pregnancy behind her Anarkali ensemble. On August 31, 2021, Sonam had taken to her IG stories and had ended the rumours with her flat-stomach picture. Check it out below: 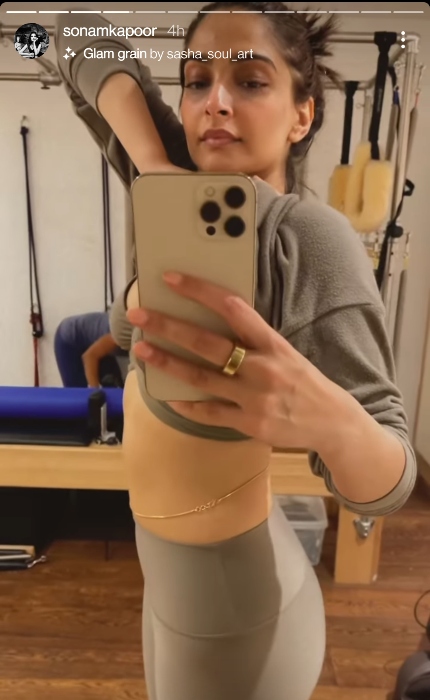 A report in ETimes stated that Sonam Kapoor is more than three months pregnant. A source close to the Kapoor family shared the details about Sonam's pregnancy and revealed that even most of her relatives were unaware of her pregnancy as she refrained from going out in the past few weeks. The source added:

"In fact, she is four months pregnant. So, she will deliver mostly in August 2022. She wasn't seen around much in recent times and this was precisely the reason. A lot of friends and relatives had got the whiff of it but she did not confirm with most of them, until today." While we were surprised to find out that Sonam had managed to hide one of the happiest news of her life, her fans are curious to know when will her baby arrive. Further, in the report, the source revealed Sonam's due date and was quoted as saying:

"The baby is due sometime in the 3rd week of August."

Also Read: Juhi Chawla Reacts To Daughter Jahnavi And Shah Rukh's Kids Suhana And Aryan Being The Future Of KKR On March 21, 2022, taking to their respective IG handles, Sonam Kapoor Ahuja and her hubby, Anand Ahuja, had shared a series of pictures and had delighted their fans with the news of their pregnancy. In the pictures, Sonam had looked oh-so-gorgeous in a black monokini and had flaunted her baby bump. The much-in-love couple could be seen sitting on a couch, and their happiness was evident on their faces!

"Four hands. To raise you the very best we can. Two hearts. That will beat in unison with yours, every step of the way. One family. Who will shower you with love and support. We can’t wait to welcome you. #everydayphenomenal #comingthisfall2022."

We can't wait to get more glimpses of Sonam Kapoor's maternity shoot!

Next Read: Kareena Kapoor Gets Trolled For The Colour Of Her Face, Fan Says 'Why Your Face Like Tomatoes'