Sonam K Ahuja and Anand S Ahuja are in a long-distance marriage. They make it work for each other by video-calling every now and then and meeting one another often. Checkout their recent picture. 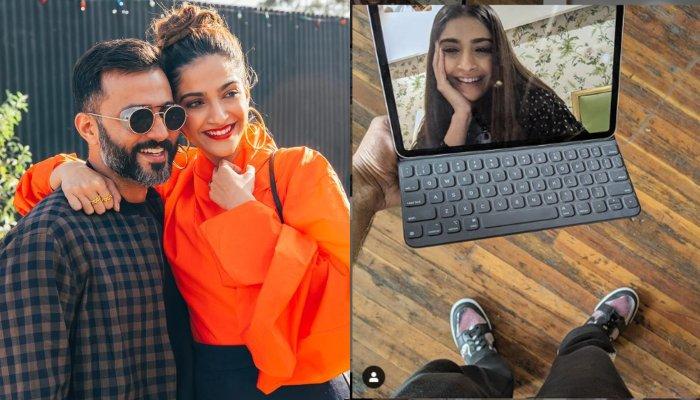 How amazing a feeling it is, to get married to the partner of your dreams! Someone whom you have always envisioned waking upto with a good morning kiss, someone your family will start loving as their own kid, someone who will assure the parents and say, “Look, she/he is with me. Don’t worry!” And that is exactly the kind of damaad that the Kapoor khaandaan has got as Sonam K Ahuja’s hubby, Anand Ahuja. After dating for over 3 years, it was last year on May 08, 2018, when Sonam and Anand became each other's for an eternity. (Do Read: Ishaan's Comment On Priyanka's Cannes Picture Proves He Shares Friendly Bond With Shahid's Ex)

Sonam K Ahuja and Anand S Ahuja have always given the world out there some serious #CoupleGoals! The duo has shaped their #EverydayPhenomenal marriage quite beautifully and every picture that the duo posts about each other never fails to make us adore them. This reminds us to share with you all, a picture of Sonam and Anand wherein the latter is facing towards Sonam, with his back in front of the camera, while his wife, dressed in pink is all smiles for the camera! Take a look at the adorable snap here: 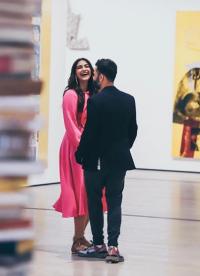 For those of you who don't know, Sonam K Ahuja and Anand S Ahuja are in a long distance marriage, because Anand’s own label, Bhane is primarily based out of London and Sonam's work is mainly India-based. The duo makes it work for each other by video-calling every now and then, and meeting one another often. And what looks like it, Anand and Sonam are once again away from each other as the former posted a picture wherein Anand is seen engaged in a video-calling session with his dear wifey, Sonam. The picture had Sonam adore her hubby, while he clicked a picture of how perfect long distance marriages work! Anand captioned the picture as, “As she was saying not to go on Instagram and focus #everydayphenomenal #girlfriendforever”, while Sonam replied, “Hahahahaha love you so much.”

In an interview with Filmfare, Anand Ahuja had once shared how he and Sonam K Ahuja manage a long distance marriage. He was quoted as saying, “When it comes to marriage, small things matter a lot. We eat meals together, even if we are in different time zones, on Skype. We also actively make sure that we don’t go over two weeks without seeing each other.” Not just marriage, their dating spree too, had begun long distance. Speaking about the same, the dapper entrepreneur had shared, “We would talk over the phone. It was seven weeks before we actually met. By then, we knew we were in love but (we) met in person to solidify it. At the end of the day, it's about being patient.”

In a recent interview with Zoom TV, Sonam K Ahuja had shared her nuances on being in a long-distance marriage. She had stated, “I think the distance definitely makes the heart fonder. I miss him a lot and I think it's important we both work. It's important for our relationship, as partners. I hope one day we find work in the same country (laughs).” (Must Read: Hina Khan's BF, Rocky Jaiswal Bashes Filmfare's Jitesh Pillai For Trolling Her Cannes 2019 Look)

Sonam K Ahuja and Anand S Ahuja are sheer workaholics, but they always believe in setting their priorities straight. Speaking about the same and also revealing if she ever considers Anand’s approval before signing films, Bollywood’s Masakali had revealed, “I do tell him when I am doing something. Ya, I do take his opinion on...dates! Because obviusly I have to spend time with my husband. So, he and I coordinate on dates. Recently, I said no to something because I wanted to spend some time with him and he said no to something because he wanted to spend time with me. So, I think there comes a point where you have to kind of understand that it's not you alone. So, I don't discuss, "Oh, I am gonna do this scene" or "I am gonna do this script" or any of those things but because we are in a long distance relationship, I think it's important to make time for each other.”

Sonam K Ahuja had further added, “So, he compromises a lot in terms of like...he needs to keep flying in because my work is dependent on other people. His work, since he is the boss, I am not the boss, because it's the collaboration..a film, so, I don't have as much flexibility with dates as he does. So, he actually flies a lot because of me. He has to keep flying in to see me all the time. So, once in a while I do need to take that stand and be like, "It's okay to sacrifice this project so that I can be with him. So, he can concentrate on his work" because he makes a lot of sacrifices for me, much more than he should.” (Also Read: Kareena Kapoor Khan And Saif Ali Khan Spotted Outside A Clinic, Netizens Suspect She Is Pregnant) 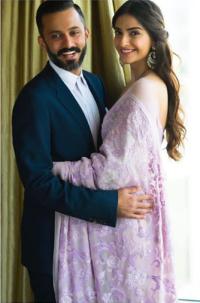