Bollywood actress, Sonali Bendre talks about her bond with her 14-year-old son, Ranveer. Scroll down to know what she has to say!

Being a mother is the most difficult job in the entire world because understanding your little one's needs is not at all easy. Things become even hard when you are a working mom as managing work and baby is a whole different experience. There is a lot of expectations when you are raising a child. Some say that you have to be your kids' friend and other times people say that you over-friendly nature can hinder your parental relationship. Recently, Bollywood actress, Sonali Bendre opened up on her relationship with her not-so-little-anymore boy, Ranveer Behl. (Recommend Read: Hardik Pandya Mocking Natasha Stankovic As She Calls Him 'Jigar Ka Tukda' Is Why They're The Cutest)

Before we take you further into the story, let us take a look at Sonali Bendre and her husband, Goldi Behl's love story. She was an educated Maharashtrian girl while he was a typical Punjabi brat. The love between the two seemed impossible. But destiny had other plans. They met, sparks flew and Cupid had hit them with its sharpest love arrow. On November 12, 2002, Sonali and Goldie had tied the knot in a lavish ceremony. Cut to 2020, Sonali and Goldie have created their own happily ever after with a lovely 14-year-old son, Rajveer Behl. 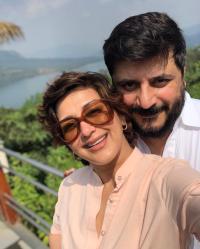 Recently, in an interview with JioSaavn podcast, Raising Parents, Sonali talked about her relationship with her son, Ranveer. She shared, "I am not my child’s friend and don’t think I need to be. I am his parent and why can’t I be a friendly parent and have a great time together. There are certain things he will speak with his father, with his aunts, with his friends, with his grandparents, there needs to be an outlet for healthy relationships." Sonali further added, "I tell my kid ‘you know technology more than I do, but however grown-up you might be, your brain is not fully formed and might not be able to process the emotional part of it’, and that’s where parents come in. It’s an investment in communication and it always pays off." (Also Read: Suhana Khan And Gauri Khan Spotted Enjoying First Showers Of The Season In Their Plush Balcony) 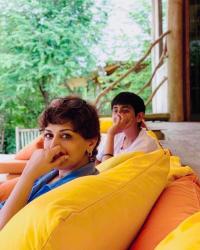 In the same interview, Sonali also shared that she never lies to her son, Ranveer. She stated, "I have never lied to my kid, I might dress up the truth but have never lied. If I expect my child to be truthful, I need to be true to him. The only reason why you don’t want to be completely truthful is that when they are young they will analyse it and comprehend it in a manner and you don’t want it to be ‘so big’ that the child will be scarred. So to make it a bit lighter you give them a version of the truth." 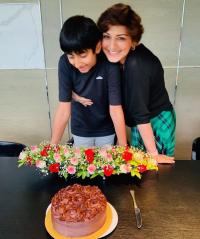 At the India Today Conclave 2019 in Delhi, Sonali had revealed how she had told the news of her 'high-grade' cancer to her son, Ranveer. She had said, "He was on a school trip that summer. I could have sent him back home and everyone was saying, 'Let him come home, you deal with this over there.' But I said no, I need to see him. I need to be able to talk to him. That's the way Goldie and I have brought him up. We have always been very honest with him and the only thing we were hoping is that by not lying to him, he will not lie to us and be honest with us."

Sonali had further shared how her son had reacted to the news and had said, "When Goldie told him... Ranveer is asthmatic... he went quiet. He took out his inhaler and took one puff. Goldie asked, 'Do you understand what it is?' He said, 'Yeah, I do. Mumma and me have read a book. Papa, it's going to be very tough on the family and we all need to be in it together." (Don't Miss: Namrata Had Shared Same Cuddled-Up Picture With Mahesh As Samantha And Naga On The Same Day)

Well, Sonali is definitely an amazing mom! What do you think?