Bollywood actor, Kunal Kemmu donned a chef's hat as he cooked a yummy lunch for his family. Check out his cute video shared by wifey, Soha Ali Khan!

Gone are the days when kitchen was just a 'work zone' for the lady of the house. Nowadays, men are also taking equal responsibilities when it comes to cooking for the family. It won't be wrong to say that they take more joy in cooking for the family than woman and they love experimenting new things by turning the kitchen into a mess, but that's another story. Just like all the other men, who are stepping in the kitchem, Bollywood actor, Kunal Kemmu also donned a chef's hat as he cooked a yummy meal for his family. (Recommend Read: From Neighbours To Soulmates: Untold Love Story Of Dhirubhai Ambani's Daughter, Deepti And Duttaraj)

Before we take you further into the story, let us take a look back at Soha and Kuna's love story. The duo had met each other in 2009 when they had signed a film, Dhoondte Reh Jaaoge, and at that point of time, they didn't even think of becoming friends. But when they had collaborated for their second film, 99 in 2009, they had felt the connection. And rest, as we say, is history!

Soha often shares glimpses of her 'happily ever after' on her Instagram handle for her followers. On October 18, 2020, she took to her IG stories and shared a video of her hubby, Kunal, who turned into a chef for the day. In the video, we can see Kunal making something delicious in the kitchen and looked like a pro in the cooking department. We also heard Soha asking her hubby, "What are you cooking", and he replied, "Spaghetti pomodoro". Soha then asked him, who he is cooking for, to which, Kunal replied, "Me, myself and you". Check out the screenshot of the same below:

On October 4, 2020, Soha Ali Khan had turned a year older, and to make her day special, Kunal had penned a special note. The doting husband had taken to his Instagram handle and had shared a mushy picture with Soha. In the picture, we could see the duo, posing for the camera while Kunal had hugged Soha from the back. Alongside it, he had written, "To the one and only who can invoke all the emotions I have and some I didn’t know I had. The smile when I am happy and the sunshine when I am low and the Dictionary when I’m out of words. Happy Birthday my love." (Also Read: Hema Malini And Dharmendra Look Worried In This Unseen Picture From Daughter, Esha Deol's Wedding)

In an interview with the Free Press Journal, Soha had talked about changes that had come into her life after. She had revealed, "Honestly, nothing has changed. Apart from the fact that my boarding pass says Mrs now and that feels odd. The only change that I observed was in the way society perceives you – by that I mean a social acceptance comes when you are a married couple. In terms of our relationship, there is no change at all. Maybe because we have known each other for six to seven years and we dated for three years before we got married. There was no moment where I felt, ‘Oh I didn’t know this about you,’ or he never said,‘I didn’t know this is how you look in the morning’. There were no surprises. And that’s how we wanted it to be. When we decided to get married he told me that he did not want me to change in any way. A sort of apathy comes in after you get married but we just try and not take each other for granted." (Don't Miss: Samantha Akkineni Revealed The Best Gift She Had Received From Naga Chaitanya And It's Too Adorable) 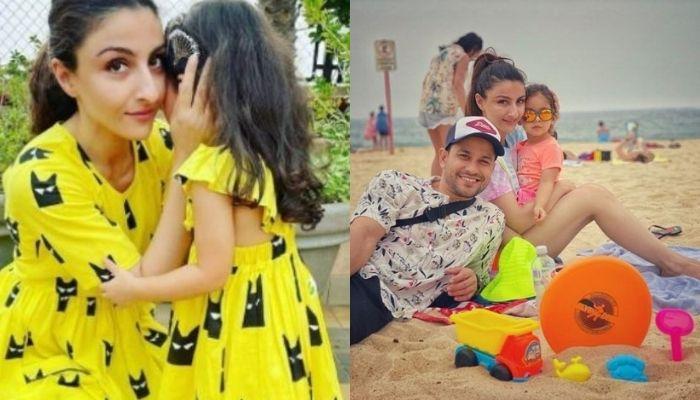 Soha Ali Khan and Kunal Kemmu had embraced parenthood on September 29, 2017, with the arrival of the cutest little angel in their lives. And now, that cute little angel rules social media! Soha and Kunal's little doll, Inaaya Naumi Kemmu is one of the most popular star kids, and her