Soha Ali Khan paid a visit to her father, Mansoor Ali Khan Pataudi’s graveyard and sharing a picture from the same with her daughter, Inaaya Naumi Kemmu, wrote, “Wish you were here.” For a relationship, the most cliched phrase used is, ‘opposites attract’! In a relationship, two people are like yin and yang, and their co-existence balances out the universe. While some believe that dating someone with whom you have ‘nothing’ in common would be a problematic experience, some live the best of both worlds with their complete opposite partner! You get to learn so much about the other person when you both like different things, and together you make the most cherishable memories. And B-town boasts of some beautiful ‘opposites attract’ relationships, one being of Sharmila Tagore and late, Mansoor Ali Khan Pataudi. (Also Read: Kunal Kemmu Shares An Adorable Picture Of His Two Leading Ladies, Soha Ali Khan And Inaaya)

Not only their faiths were different, but everything from their profession to their personalities were poles apart. While he was the blue-eyed Nawab of the princely state of Pataudi, she was the finest B-town diva, who moved against the tide and broke the stereotypes with her choice of roles in the films. Mansoor Ali Khan Pataudi and Sharmila Tagore’s love lasted forever, and it also flourished beyond the controversies. Mansoor Ali Khan and Sharmila Tagore are blessed with three children, Saif Ali Khan (1970), Saba Ali Khan (1976) and Soha Ali Khan (1978).

On November 30, 2019, Soha Ali Khan along with her husband, Kunal Kemmu and daughter, Inaaya Naumi Kemmu had headed off to her ancestral home, Pataudi palace. Since then, Soha and Kunal have been treating their fans with glimpses of their vacation at home. Soha, Kunal and Inaaya are also joined by his parents and sister. Soha paid a visit to her father, Mansoor Ali Khan Pataudi’s grave and sharing a picture from the same with her daughter, Inaaya, wrote, “Wish you were here.” The inscription of the gravestone could be read as “Mohammad Mansoor Ali Khan, The Nawab of Pataudi 1941-2011 Love me when I am dead and do not let me die.” 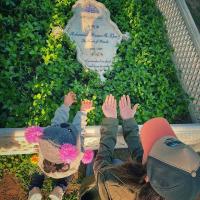 In a throwback interview with the DNA, Soha Ali Khan had thrown some light on the parts of her book, The Perils of Being Moderately Famous that focused on her father, Mansoor Ali Khan Pataudi. Soha had elaborated, “I shared a good relationship with him and had a huge amount of respect for him. I’m happy that I put it down because after he passed away, these were the things that I was thinking about. We enjoyed each other’s company immensely. We went on holidays together. He would help me with my school debates, speeches (especially since he was a good orator), homework, and my visa application. I always thought he was the coolest person in the world and I was so lucky to be loved by someone who himself was loved by so many people.” (Also Read: Unseen Pictures Of Isha Ambani Piramal Enjoying Painting On Her Birthday With Mother, Nita Ambani) 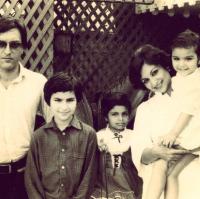 Coming back to Mansoor Ali Khan Pataudi and Sharmila Tagore’s love story, let us give you a recap of how the blue-eyed Nawab of Pataudi lost his heart to the Bengali beauty of Hindi cinema. It was in 1965, when Sharmila ji and Mansoor Ali ji had first met one another at a cricket match in New Delhi. Mansoor Ali ji was a crazy Bollywood fan and even Sharmila ji wasn’t an avid cricket lover. They had gotten introduced as two normal people, despite being famous in their respective fields, and soon, they were charmed with each other’s personalities. Because being from totally different professions and despite mutual liking for one another, Sharmila ji didn’t think of Mansoor Ali ji as a life partner. But fate had different plans and on December 27, 1969, they were pronounced as husband and wife in a royal wedding. (Also Read: Boney Kapoor Breaks Down Remembering His Late Wife, Sridevi On The Occasion Of Her Book Launch) Born with a silver spoon, Mansoor Ali Khan Pataudi was a pioneering figure in India's rich cricketing heritage. Just like his father, Iftikhar Ali Khan, MAK had impressed the cricket fans with his strokes and moves which not many would have imagined on-field on those days. As of November 2015,