On November 28, 2022, Soha Ali Khan shared a cutesy video featuring some unseen glimpses of her daughter, Inaaya Naumi Kemmu, and it's unmissable!

Bollywood's adorable couple, Soha Ali Khan and Kunal Kemmu became proud parents with the arrival of their baby girl, Inaaya, into their lives on September 29, 2017. Their cutesy daughter rules millions of hearts, courtesy of her funny antics and innocent smile. Even at the age of 5, Inaaya is a loving and caring person, who lives in our hearts rent-free.

Soha and Kunal are doting parents, who have been acing their parenting duties like a pro and how. They often tease their fans with cutesy glimpses of their little one on their IG handles, but rarely reveal her full face in the pictures. Moreover, the duo sometimes even ask the paps not to click their kid's pictures whenever they step out of their house. Well, now Soha has delighted us with some unseen glimpses of her little one on her IG handle.

Recommended Read: Alia Bhatt To Become A Chill Mom Like 'Nanad', Kareena, Here's When She Will Reveal Her Baby's Face On November 28, 2022, Soha Ali Khan took to her IG handle and shared a beautiful video, giving her fans a sneak peek into a recap of the year 2022. The video started with Soha standing inside her home, and as she moves towards the camera, a message pops up on the screen which reads, 'The 2022 season comes to an end, good night'. Then, we can see an insight into some of the most adorable moments from Soha's travel diaries with her family and some rare cutesy pictures of her daughter, Inaaya Naumi Kemmu. Alongside the video, she penned:

The video featured some super cute glimpses of Soha and Kunal's baby girl, Inaaya, and it simply melted our hearts in no time. From Inaaya goofing around on the streets of London to posing with a caricature of Queen Elizabeth, the video showed us some unseen pictures of the little munchkin. We can also see Inaaya posing for an adorable picture with her great-grandmother in one picture, and in the next one, imitating her daddy dearest, Kunal. Inaaya was also seen acing a gymnastic pose with grace and petting the dogs at the Pataudi Palace in the video. Check out the glimpses below:

In an interview with News18, Soha Ali Khan revealed if Inaaya can comprehend the paparazzi’s attention on her and said that she knows that she belongs to a family of public figures. Reflecting on the same, the doting mommy shared that Inaaya doesn't even allow her to click her pictures and hates it when her mommy records her. In her words:

"She says, ‘Who are these people taking my picture?’ And sometimes she doesn’t want me to take her picture. I’m so guilty of constantly taking her picture and videos and she’d be like, ‘Are you recording me, don’t record me.’ So, I totally respect that. She understands that she belongs to a family of public figures and there are people who have an interest in her as an individual. When she’s comfortable, she is comfortable and when she wants to put on her mask, she does that. Now she’s old enough to make those choices." On the work front, Soha Ali Khan was last seen in the web series, Hush Hush. 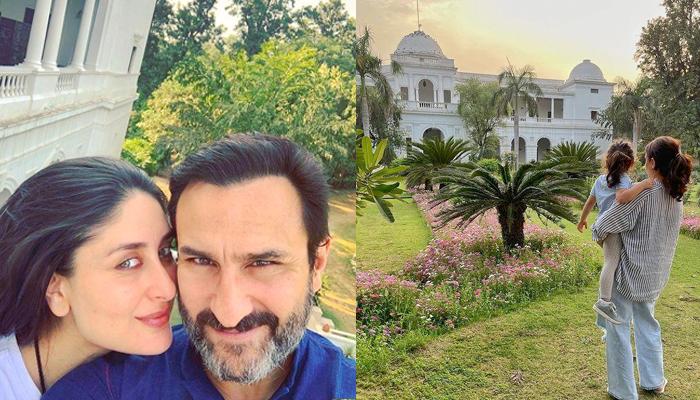