The doting mommy, Soha Ali Khan shared a cute picture of her daughter writing a letter to Santa, and it is everything Christmasy. Scroll down to check it out!

Soha Ali Khan and Kunal Kemmu's little goofball, Inaaya Naumi Kemmu is an absolute favourite of the internet. Soha often gives glimpses of Inaaya's artwork, be it her DIY decoration for Halloween, Diwali, handmade cards and whatnot. The doting mommy has now shared a cute picture of her daughter writing a letter to Santa, and it is everything Christmassy! (Also Read: Mira Rajput Kapoor Shows Her Postpartum Belly After Her Son, Zain's Birth With A Throwback Picture)

A few hours ago, Soha Ali Khan had edited a picture of her daughter, Inaaya Naumi Kemmu with their pooch to make her pooch look like a reindeer. The picture was too cute as Inaaya could be seen sitting like their furry friend and had given Christmas vibes. Sharing the picture, Soha had written, "My reindeers are all set! #rudolph #christmas.” 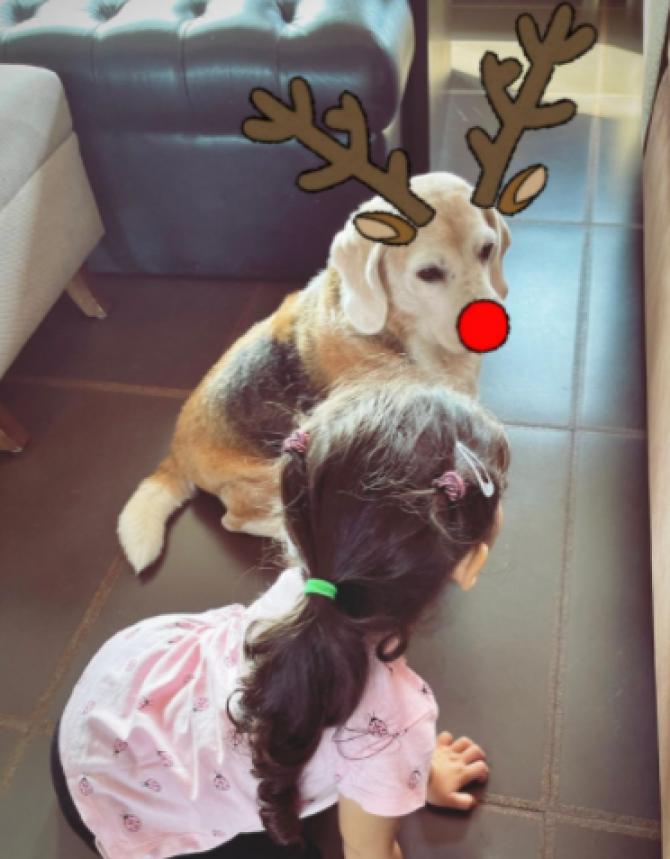 On December 19, 2020, Soha Ali Khan took to her IG stories and shared a cute picture of her little munchkin, Inaaya Naumi Kemmu writing a letter to Santa and we have to say it woke up all the dormant festive vibes. Little Inaaya was engrossed in her letter, and we wonder what is she asking from Santa! Check out the picture below: 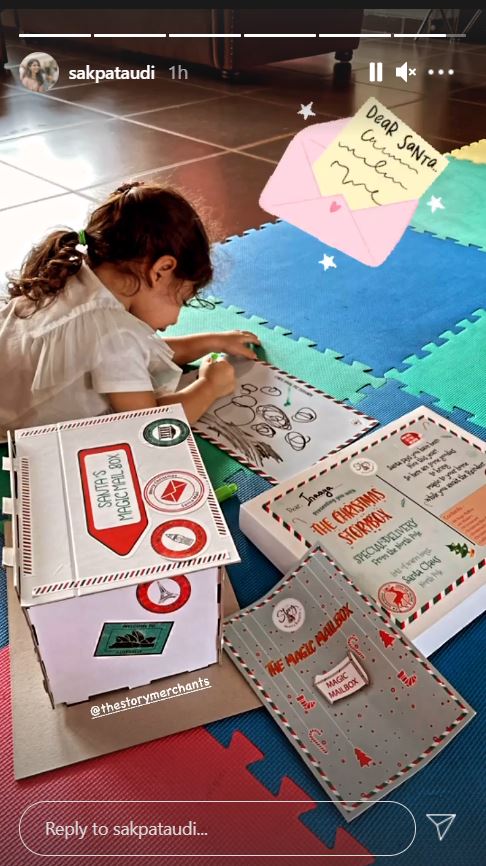 On December 16, 2020, Soha Ali Khan had given a close-up of her Christmas décor which had a super-adorable picture of her baby girl, Inaaya Naumi Kemmu, sporting a pom-pom on her nose and pigtails. Soha had added a sticker “Handmade with Love”. In 2017 around Christmas, Kunal Kemmu had posted a cute picture of Inaaya and delighted their fans with a Christmas treat. Kunal had captioned it as “It’s a merry Christmas every day when you got the best gift in the world look at you with so much love.” 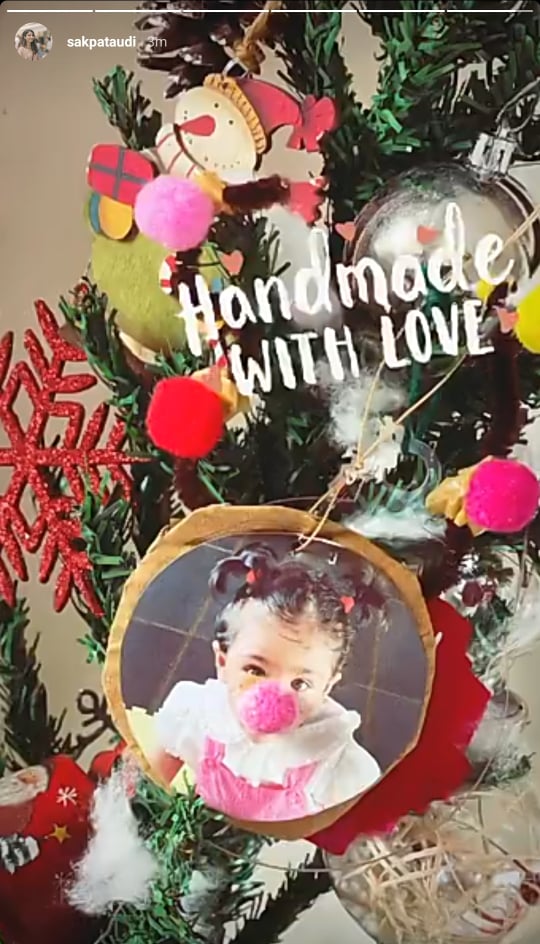 Last year, to mark Christmas 2019, Kunal Kemmu had posted a throwback picture with his wife, Soha Ali Khan, brother-in-law and sister-in-law, Saif Ali Khan and Kareena Kapoor Khan. ­The picture was taken at the Pataudi house, where the couples had posed with a Christmas tree. Kunal had also posted a picture of his ‘favourite teddy bear’ and had written, "My favourite teddy bear with her teddy bears Merry Christmas to all." In the picture, Inaaya could be seen sitting by a window at their home, dressed in pink and white in the company of her teddies. (Don't Miss: 'Murder 2' Fame, Sulagna Panigrahi Gets Married To Popular Comedian, Biswa Kalyan Rath [See Photos]) Did you know that Kunal Kemmu has a tattoo of his daughter, Inaaya Naumi Kemmu? In an interview with the Bombay Times, Kunal Kemmu had explained his third tattoo, which is the name of his daughter, Inaaya Naumi Kemmu in Devanagari. He had elaborated, “I always wanted to get my daughter’s name tattooed on me. I find the fact interesting that the initials of her name - Inaaya Naumi Kemmu – is INK. So, I wanted to get a tattoo where the meaning of her name gets encapsulated in an art form.” Decoding the ink, Kunal had continued, “I got her first name in Devanagari. The red bindi depicts Maa Durga, which represents Inaaya’s middle name ‘Naumi’.” 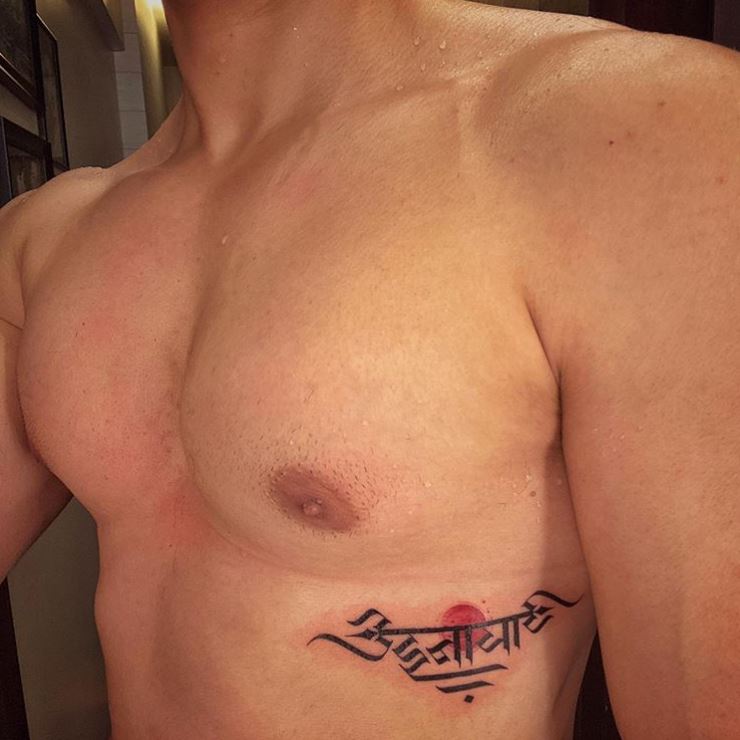 On October 30, 2020, Soha Ali Khan had given a sneak-peek into her angel, Inaaya Naumi Kemmu’s DIY Halloween decorations. In the candid picture, Inaaya was seen admiring her Halloween inspired artwork and the doting mommy had written, "Getting ready for Halloween" atop it. Later, the family of three had posted a picture of their twinning Halloween outfit and we were in complete awe of it. (Recommended Read: Charu Asopa Wishes Her 'Sasur Ji' On His Birthday Along With 'Pati' Rajeev And 'Nanad' Sushmita Sen) 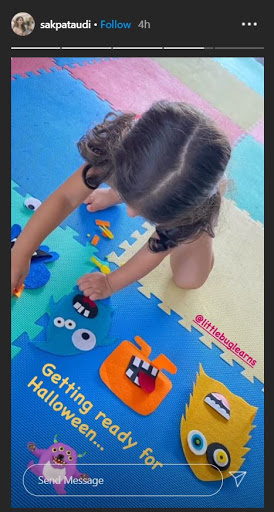 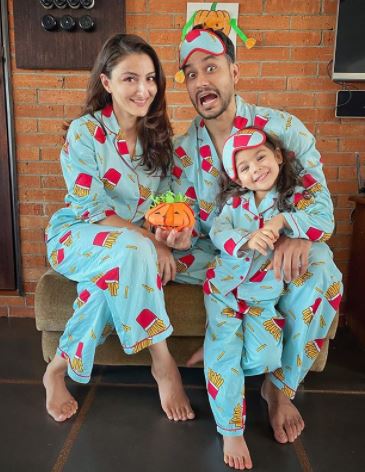 How are your Christmas preparations going on? Share with us! 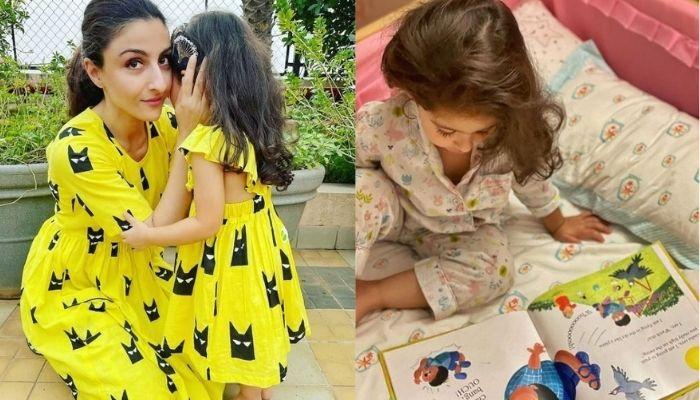 Christmas is just around the corner, and the preparations are ringing in every home. Gifts, cakes, wishlists, Christmas tree decor, lighting, treats and whatnot. We have our plate full with happiness and the overwhelming feeling of finally letting this dreadful year go. Let's pray for a better and fresh start