After speculations at the Ambani residence about who the 'mystery girl' was with Priyanka Chopra's brother, Siddharth Chopra, she was seen partying with her rumoured beau and his mom, Madhu Chopra.

Love will come back to you if you have faith in its working. You might get hurt a zillion times in love and it might not work well in your favour many a time, but it is a potpourri of faith, hope, belief and love, of course, which makes it one of the stupendous feelings to experience for the humankind. In case you still don’t get what we are trying to say, take a cue from Priyanka Chopra Jonas’ baby brother, Siddharth Chopra. Love came close to Siddharth twice and went away in a jiffy too, but he didn’t lose faith. And look at what happens when you don’t. You twin with ‘someone’ on one of the grandest bashes people have ever seen! (Do Read: Divyanka Tripathi Dahiya Reveals Her Reaction If Compelled To Work With Ex, Says It Depends On Past)

Like every year, the Ambanis’ had celebrated Ganesh Chaturthi 2019 with great pomp and show. An all decked-up Antilia, starry evening, traditional wear and lots of lights and paps had made this year’s celebration, a grand one for Asia’s Richie Rich’s (like always!). While an array of Bollywood celebrities had arrived looking their best, Siddharth Chopra entering the venue with a ‘mystery lady’ twinning with her in shades of blue, had garnered every possible attention. Siddharth and the lady, whom it later came about that her name is Neelam Upadhyaya, had posed for the camera as they made their entry to the mansion together. We had also noted that it was the first public entry/picture of Siddharth with another ‘miss’ post his broken engagement with ex-fiancee, Ishita Kumar. Here’s a picture of the duo:

As soon as Siddharth Chopra was spotted looking super-happy with his ‘mystery lady in blue’, people started wondering about who she was and what’s brewing between her and Siddharth. It later came about that the name of the gorgeous lady is Neelam Upadhyaya, who is a South Indian actress and is steadily rising to fame in the industry. Just as our interest towards these two grew, Siddharth took to Instagram and posted a picture from one of his party scenes, which had his rumoured ladylove, Neelam, mommy, Madhu Chopra, VJ Anusha, television actress, Puja Banerjee and her fiancé, Kunal Verma present in the frame. Siddharth captioned the picture as “Crazy 30. #dirtythirty... life’s greatest gift is having family and close friends. Great start into my thirties.” 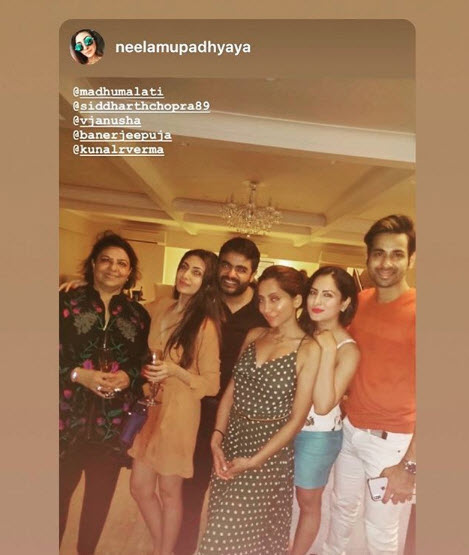 Siddharth Chopra’s rumoured ladylove, Neelam Upadhyaya and mommy, Madhu Chopra partying together suggests a definite ‘nod’ to this ‘couple’, right? (*wink wink*) Coming back to Siddharth Chopra and his now-estranged fiancée, Ishita Kumar, the duo had an intimate engagement ceremony and was even supposed to get married in the last week of April 2019. Priyanka was even spotted in Delhi but due to reasons best known to Siddharth and his ex-in-laws’ family, their wedding was called off. While Ishita is now working in London probably as a step towards moving on, Siddharth has apparently found love for the third time in a beautiful lady. The duo made their first appearance yesterday and we wonder what’s cooking in the star brother’s love paradise! (Also Read: Somya Seth Shares Cryptic Post About Violence And Drugs, Hinting At The Reason For Troubled Marriage) It was on February 2019, hardly two months after Priyanka Chopra Jonas and Nick Jonas’ wedding ceremony, when first-ever pictures from her little brother, Siddharth Chopra’s roka ceremony came about. Priyanka had shared a heartfelt post, congratulating Siddharth and his ‘then’ soon-to-be-missus, Ishita on their roka. Sharing a picture of the then just-rokafied couple, PeeCee had written, “So proud of my baby brother. Ishita welcome to the family... you are so beautiful together... I wish you both the best for the future! Happy Roka!! @ishittaakumar @siddharthchopra89.” For the uninitiated, this is the second time when Siddharth Chopra’s wedding has been called off. Prior to getting rokafied to Ishita Kumar, Siddharth was in a relationship with another lady named Kanika Mathur. After getting engaged in an intimate roka ceremony in October 2014, Siddharth and Kanika were speculated to marry in February 2015 in Goa, and the preparations had also begun in full swing. Reports also had it, that Siddharth's superstar sister, Priyanka Chopra herself was taking a personal interest in the wedding preparations, ensuring everything to be perfect. But soon enough, Siddharth and Kanika's relationship went kaput and a source close to the family had then revealed, “Siddharth wants to concentrate on his career and his new venture (a pub-lounge in Pune). Pushing it ahead was a big decision for both the families. Priyanka is also not in the country at the moment and the wedding cannot take place without her." (Must Read: Neetu Kapoor Can't Contain Her Happiness As She Expects To Be Home With Rishi Kapoor After A Year) Well, we hope Sidharth and Neelam are dating because they look beautiful together! Don’t you think alike?