Shilpa Shetty Dances Her Heart Out With Viaan Raj Kundra, Opts For An Eco-Friendly Ganpati Visarjan

Shilpa Shetty Dances Her Heart Out With Viaan Raj Kundra, Opts For An Eco-Friendly Ganpati Visarjan

Shilpa Shetty Kundra opted for an eco-friendly Ganpati ‘visarjan’ and was seen dancing her heart out with her family. Take a look at the video! 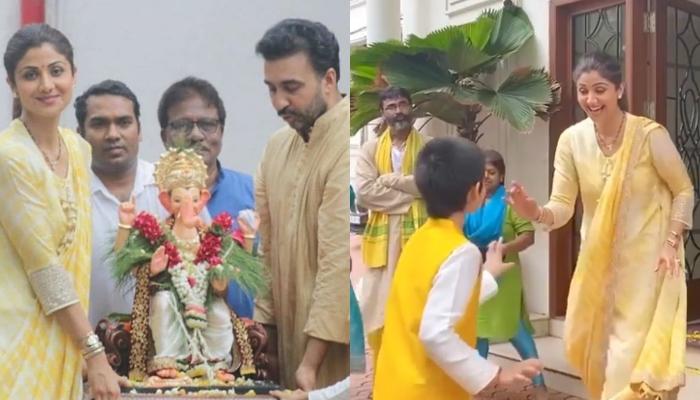 The entire nation celebrated Ganesh Chaturthi with much joy and happiness keeping all the precautions of COVID-19 in mind. As much as we love welcoming Bappa home, bidding adieu to him always makes us sad. While the entire nation has bid farewell to Ganpati ji, our B-town celebs too shared glimpses of their visarjan. Shilpa Shetty Kundra, who made sure to look into every minute detail herself due to the pandemic, opted for a low-key celebration this year. The gorgeous actress, along with her hubby, Raj Kundra, son, Viaan Raj Kundra and their family opted for a home visarjan. (Also Read: Gauahar Khan Twins In Blue And White With Rumoured Beau, Zaid Darbar To Celebrate Her Birthday)

On August 20, 2020, Shilpa Shetty Kundra had welcomed Ganpati 'Bappa' home. Dressed in a pink traditional attire, Shilpa had looked gorgeous and was seen taking all the precautionary measures by wearing a mask and gloves. As she had kept the celebration minimal with just family members, this year’s Ganesh Chaturthi was quite special as it was her daughter, Samisha Shetty Kundra’s first Ganpati utsav. While scrolling through her social media handle, we came across some beautiful moments of her Ganpati visarjan with family.

On August 23, 2020, Shilpa took to her IG handle and shared an adorable video from her Ganpati visarjan. In the video, Shilpa was seen dancing with hubby, Raj, mother, Sunanda and mother-in-law. Her son, Viaan Raj Kundra was also seen matching his steps with mommy, Shilpa and the mother-son duo looked adorable as they danced their hearts out. Shilpa looked gorgeous in a yellow and white saree while Raj opted for a golden-coloured kurta and their son, Viaan twinned with his parents. Shilpa and her family opted for an eco-friendly visarjan. Along with the video, Shilpa wrote, “Saying goodbye is always the hardest, especially when Gannu Raja is on His way home. Although it’s a rather quiet & subdued farewell this year... we’re sending Him only with a promise that He’ll be back next year with better times.”

In an interview with Bombay Times, Shilpa had revealed that she would have a low-key celebration and had stated, “This is the 11th year I have welcomed Ganpati Bappa home, and it’s even more special as it is Samisha’s first year. This is the first time I haven’t invited people over, so it is going to be a really small affair with just family members. Even my sister, Shamita, isn’t around as she is shooting in Kolkata.” (Also Read: Rithvik Dhanjani's Birthday Wish For Ex, Asha Negi Is All About 'Dil Hai Chota Sa, Choti Si Aasha')

Shilpa had also revealed that her daughter, Samisha’s Annaprashan ceremony would also take place during the Utsav. Talking about the same, Shilpa had said, “This pandemic has made us all realise a lot of things, but most importantly, it has shown us the difference between necessity and luxury, so we are just sticking to the basics. This year, I have done the decorations on my own. There is no fanfare and caterers, because there are no guests. We will conduct a Satyanarayan puja, and I will feed Samisha a little solid food, a ritual that we call Annaprashan. We had done the same ritual for Viaan (son), too. Though the celebrations will be low-key, they will be very special.”

Earlier, in an interview with the Mid-Day, the actress had talked about switching to an eco-friendly idol. She had stated, "As a celebrity, we have to be responsible for our actions. One must be the change they want to see. I live on the beach, and it was a heartbreaking sight after visarjan. The pollution it causes is massive. Hence, the decision to change 4 years ago." (Also Read: Sushant Singh Rajput's Sister, Meetu Singh Had Said This On Seeing His Body Upon Entering His Room)