Shahid Kapoor Reveals What Is The Only Thing That He Needs On A Rainy Winter Evening, It Is Adorable

Shahid Kapoor Reveals What Is The Only Thing That He Needs On A Rainy Winter Evening, It Is Adorable

Shahid Kapoor and Mira Rajput are one of the most sought-after couples of the glamour world. Recently, Shahid shared a picture with Mira and revealed what he needs on a rainy winter evening. 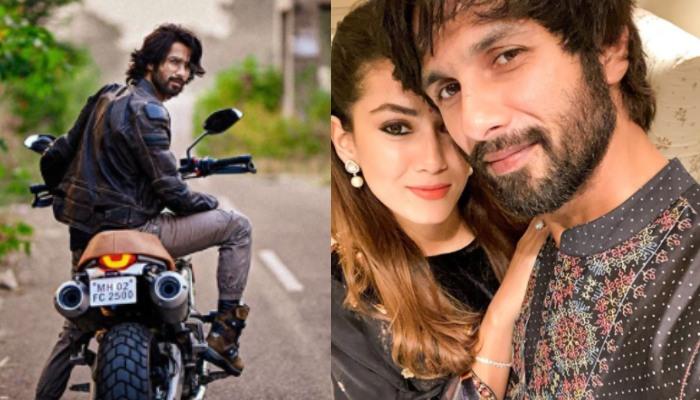 Love is the only key to a happy married life. Lucky are those who get married to someone, who not only loves them unconditionally but also supports them throughout their life. Bollywood’s handsome hunk, Shahid Kapoor and his gorgeous wife, Mira Rajput Kapoor have reinstated our faith in love and marriage. The beautiful 21-year-old graduate from Delhi University would have never thought that she would become the talk of the town because of her marriage with Shahid. From a star wife to an adorable mother, Mira has aced all her roles. (Also Read: Vijay Deverakonda's Brother, Anand Deverakonda Reveals How They Used To Fight For Real While Playing)

Shahid Kapoor and Mira Rajput, who had completed five years of marital bliss are an inspiration to the millennials. It was on July 7, 2015, when the duo had gotten married in an intimate Gurudwara wedding with family members and close friends in attendance. Since then, Shahid and Mira have been living their ‘happily ever after’ and have welcomed two little munchkins, Misha Kapoor and Zain Kapoor in their lives.

Shahid Kapoor never shies away from expressing his love for his wife, Mira Rajput and their PDAs always speak volumes of the love they have for each other. His recent post is no different as he took to his IG handle and shared a romantic picture with Mira. In the picture, Mira and Shahid looked like a match-made-in-heaven as she held her head on Shahid’s chest while the two posed for the camera. Shahid captioned the picture as “Just what I need on a rainy winter evening.”

Shahid dotes on his wife, Mira, and we have often seen the same through his social media posts. On their fourth wedding anniversary, he had posted the first-ever picture of his now-wife, Mira that he had saved in his phone. Shahid had captioned it as “Her first picture I saved on my phone. And now almost every second picture has her in it. She is #life. I love you @mira.kapoor thank you for being you.” (Also Read: 14 Celebrities, Who Announced Their Quarantine Pregnancies Or Embraced Parenthood In The Year 2020)

On September 7, 2020, Mira Rajput had turned a year older, and Shahid Kapoor had penned a heart-melting birthday wish for his ladylove. Shahid had taken to his IG handle and had shared a gorgeous picture of Mira. Along with the picture, Shahid had expressed how lucky he is to have her in his life. His wish could be read as “Happy birthday my love. You are beautiful inside out. And I am blessed to have you in my life” followed by a heart emoticon.

Once in an interaction with The Times of India, Shahid had talked about how he had fallen in love with Mira and had stated, "I’m still falling in love with her a bit more every day. The first time we met, we spoke for seven hours. We were at a friends' farmhouse in Delhi. We went for a walk outside and the sun was setting behind her. I realised her eyes were not dark. They had a hazel tinge. That moment, I felt shayad main iss ladki se shaadi kar sakta hoon. But I also told myself, “What are you thinking? Bees saal ki hai besharam!”"

Do you know that Shahid and Mira’s fight lasts over 15 days? Revealing the same on Neha Dhupia’s celeb chat show, BFFs With Vogue, Shahid had stated, "I usually get flustered when my wife and I have a fight. It bothers me and I take time to get over it. It's once in a couple of months, but when we do fight, but ours lasts a long time, like 15 days. You know it (the tension) is there and you finally talk it out." (Also Read:

We love Shahid and Mira’s camaraderie. What about you?

The ‘Delhi based girl’, Mira Rajput had married Bollywood actor, Shahid Kapoor on July 7, 2015, and had entered into the lives of his million fans. Over the years, she has proved that she is not just a fabulous Bollywood wife and won our hearts with her humble nature and