Shahid Kapoor once opened up about his concern over the media's constant glare on his daughter, Misha Kapoor.

Celebrity kids are the most loved and are constantly papped wherever they go. One such celeb kid is Shahid Kapoor and Mira Rajput’s daughter, Misha Kapoor. Right from the day she was born, Misha has been paparazzi’s favourite as her cuteness stole the limelight from her celeb parents. It was in 2015 when Shahid Kapoor got married to Delhi-based Mira Rajput.

A year after marriage, Shahid and Mira had embraced parenthood with the arrival of their little princess, Misha Kapoor. After sharing partial glimpses of their little angel, it was in 2017, when Shahid had posted the first picture of his darling Misha to the world. In the monochrome picture, Misha was seen cuddled up in her mommy, Mira’s arms, looking like a cute patootie. He had captioned the picture as:

Also Read: When Gauri Khan Revealed How She Would React If Her Husband, Shah Rukh Khan Finds Another Woman Ever since Misha was born, she has been getting a lot of media attention, which was a concern for the doting daddy, Shahid Kapoor. In a throwback interview with Mid-Day, Shahid had addressed the same and revealed how it is not good for children. Stating how he hates to think about the constant media glare on Misha, Shahid had said:

“My daughter didn’t choose this glamorous life. What’s her fault? I hate to think of all the glare that’s on her. That is probably the only time I feel I should have had another job. I don’t want her to deal with it. It’s not good for children to go through this. They have a right to a normal childhood.” Misha is undoubtedly the most adored celeb kid and never fails to impress her fans with her cuteness. Earlier, in an interview with a leading daily, Mira had got candid about the constant attention on Misha and stated:

“As far as media attention is concerned, I know it’s going to happen. I can’t keep Misha behind closed doors all the time. I want her to have a normal childhood. I want her to know that she has the privileges that she has because of her father. She has to respect that. I just hope that she doesn’t get swept away by the tide.” 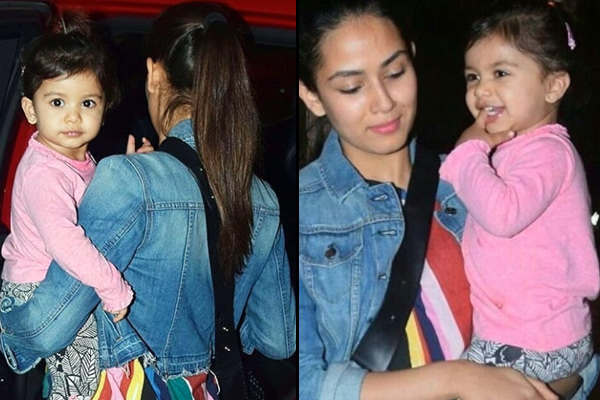 When Misha Kapoor had turned 3 on August 26, 2019, Mira Rajput Kapoor posted an adorable picture of Misha from her infant days and penned the sweetest wish for her. Her note was captioned as:

“I love you my sweetheart. Happiest birthday to my angel. I pray for your happiness my darling, God bless you always! Thank you for being the light of our lives!” Well, we definitely feel that Misha is one of the cutest celeb kids of B-town. What do you think? Let us know.