Shahid Kapoor is undoubtedly a doting father to Misha Kapoor and a caring husband to Mira Rajput Kapoor. Despite being busy with his shooting schedules, he makes sure to spend quality time with his family. And since Mira and Shahid are expecting their second child, he leaves no stone unturned to make his preggy wifey feel special. (Also Read: Misha Kapoor Pampers Her Preggy Mommy Mira Rajput Kapoor While Daddy Shahid Kapoor Is Busy Shooting)

Shahid Kapoor, who is busy shooting for his upcoming film, Batti Gul Meter Chalu, took out some time from his hectic schedule and accompanied his wife as she travels to her hometown, Delhi. Shahid Kapoor and Mira Rajput Kapoor were snapped at the airport while they were leaving for Delhi on May 22, 2018 morning. While Mira flaunted her baby bump in a lilac coloured churidar suit, her hubby Shahid looked dapper in white shirt and denim. The whole time, Shahid was extremely careful and held Mira’s hands ensuring that she walked safely.

During IIFA 2018 press conference, Shahid, who is on cloud nine, talked about embracing parenthood for the second time. He was quoted as saying, “It’s feeling really good. There’s still time. This is the second time so it doesn’t feel new, the first time it felt very new. But it’s always very exciting and we are really looking forward to having another new member in the family. It’s an amazing feeling.” (Also Read: Taimur Ali Khan Leaves Mom Kareena's Hand To Pose For The Cameras As She Tries To Pull Him Away) When Mira was pregnant with Misha, Shahid talked about taking paternity leaves, and said to a media daily, “Of course, I will (take a paternity leave). However, now it is all about Mira. She is the one who is pregnant. She is very young and I think it is not easy. I just want to be with her, around her. Around the time the baby is due, I will not shoot for at least a month. I want to be there in the last few days of the pregnancy. I want to be there when the child arrives and enjoy these moments, as these are feelings you experience perhaps once or twice in a life... I'm in a domesticated, well-behaved, father-to-be phase.” (Also Read: Unseen Picture Of 8-Months-Old Taimur Playing Game On A Tablet Is Every New Age Gadget Freak Kid) 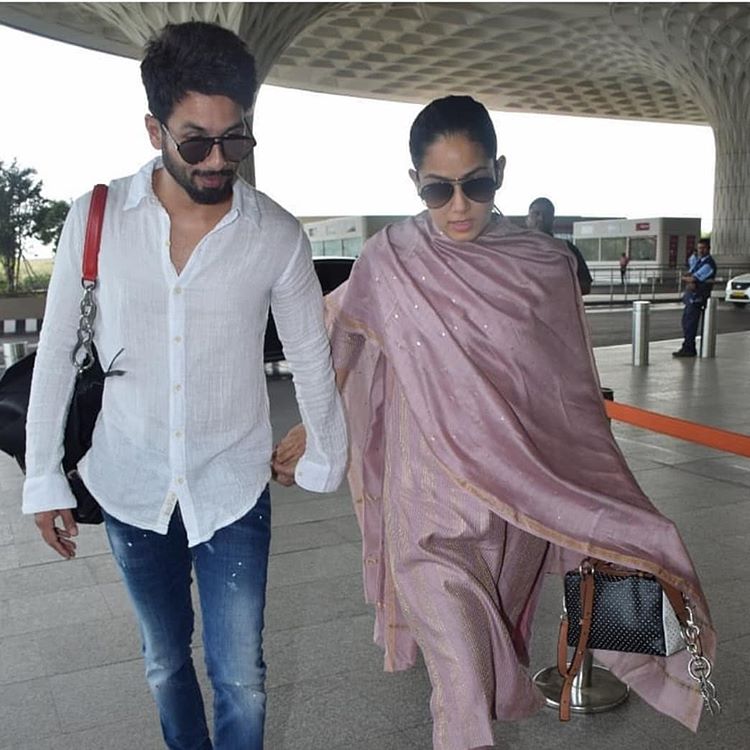 Talking about the moment when Mira was in labour, Shahid shared, "When she was in labour, I held my breath. At one point, I got dizzy and she whacked me and said, 'Why are you getting dizzy? I'm doing all the work here!’.”

Shahid Kapoor has already started giving us hubby goals with the way he never let go his preggy wife’s hands and couldn’t take his eyes off her. Bollywood actor, Shahid Kapoor's wife, Mira Kapoor knows how to keep her style comfy and in vogue. She has always taken our breath away with her on-point fashion game. Over the years, we have seen Mira create a trend of styling crop tops with lehenga skirts to donning chiffon sarees