Shah Rukh Khan and Gauri Khan are match-made-in-heaven and give major couple goals. Recently, Shah Rukh made a visit at Gauri’s store for an event and it has won our heart. 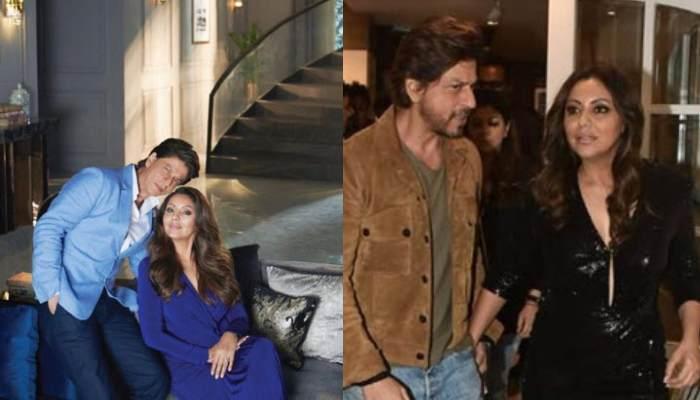 Getting old with the one you love and being able to share your ups and downs with him/her is one of the happiest phases in anyone’s life. Successful marriages do not happen in one day, a lot of sacrifices and compromises take place to build a successful relationship. From being with each other during one’s lowest point to supporting one another in their dreams and goals are the foundation of a happy marriage. Talking about acing a marriage takes us to the most powerful and sought-after couple of Bollywood. The Baadshah of Bollywood, Shah Rukh Khan and his Begum, Gauri Khan. (Also Read: Bhagyashree Remembers The Time When She Was Separated From Her Husband, Himalay For 1.5 Years)

Gauri Khan had met Shah Rukh Khan when he was a nobody, struggling to make a foothold in Bollywood industry, it was her love and constant support that he is the most successful star of the glamour world. Shah Rukh had made us believe in true love in the 90s with his iconic films and whenever we spot our favourite star with his off-screen ladylove, Gauri, our heart skips a beat. It’s been more than 13 years of their marriage but one look at this lovely couple makes us fall in love with them. We all know, how films play an important role in Shah Rukh’s life, in many media interactions, the king Khan has gone on records and stated that if ever he is asked to make a choice between his career and Gauri, he'll leave films for her.

On February 27, 2020, Gauri Khan hosted a business event at her store in Juhu but it was Shah Rukh, who proved himself to be a perfect husband as he visited his wife’s store and met all her guests. Shah Rukh sported an olive-coloured t-shirt teamed with a brown-coloured jacket and funky jeans, on the other hand, his wife, Gauri looked gorgeous in a shimmery black dress. In a video shared by one of the paparazzi’s, Shah Rukh was seen devotedly listening to his wife and later posed for the shutterbugs with all her girlfriends.

Coming back to their love story, The 'King Khan' of Bollywood had skipped a heartbeat when he had first seen Gauri in 1984 at a friend’s party. Gauri was initially not very interested in Shah Rukh but soon had fallen for his charm. Tagged as one of the best couples of Bollywood, Shah Rukh and Gauri had their share of struggles initially when Gauri’s parents didn’t approve of their marriage. (Also Read: Madhurima Tuli Opens Up On Her Relation With Ex, Vishal Aditya Singh After Their Fight In 'BB 13')

According to Gauri’s parents, religion was still secondary, they considered the relationship to be immature and also considered that Shah Rukh was unsettled at that point of time. In an interview with the Mid-Day, Gauri had revealed her parent’s reaction and had stated, “Yes, my parents were obviously not for it because we were so young and then, to take a decision to get married to a person who was going to join films and also from a different religion.”

Shah Rukh is a proud husband and has never shied away from expressing his love for his wife. In fact, Shah Rukh is known for wearing his heart on his sleeves for his lady, Gauri. In an interview with the DNA, Sharukh had once revealed, “Gauri and my relationship has been geared entirely towards raising our children. That’s what eventually happens. Parents become parents at one point and that changes it all. We have a badass 18-year-old, a dainty 16-year-old and then there’s the 3-year-old little gangster. Our conversations, our life together is through the prism of our children. They’ve been our focal point and have literally kept our world intact”. (Also Read: Karisma Kapoor Might Come Together With Kareena Kapoor Khan For The Sequel Of Her Film 'Zubeidaa')

Shah Rukh’s recent gesture for his wife has made us fall in love with him all over again! What are your thoughts on it? Let us know.