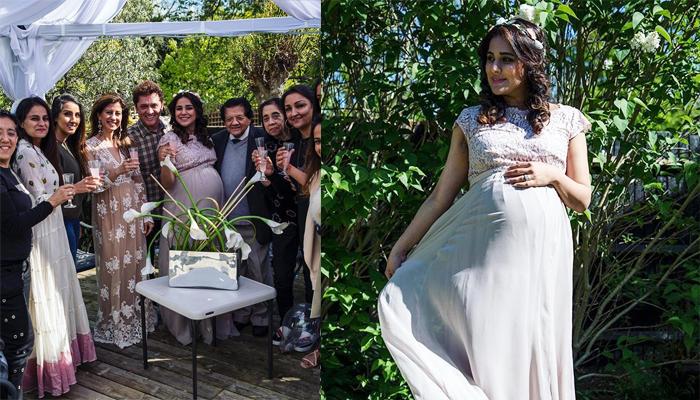 No matter when you get married or with whom you get married, the sheer joy and bliss of holding your baby for the first time in your hands, is a feeling beyond the earthly pleasures. Every time, we get to hear about any of our favourite celebrities who are expecting their baby, our ecstasy knows no bounds. And, a similar happiness was spread recently by the television couple, Sara Arfeen Khan and Arfeen Khan. (Suggested Read: Rishi Kapoor Looks All Healthy On His Dinner Date With Neetu Kapoor And Riddhima Kapoor Sahni)

Love Ka Hai Intezaar fame actress, Sara Arfeen Khan and Mere Brother Ki Dulhan actor, Arfeen Khan got married in the year 2009. After 10 years into their marital bliss, they are expecting their first baby on July 08, 2019. Sara had earlier confirmed the due date to the leading media house, The Times of India. And just recently, Sara Arfeen Khan's baby shower had taken place in London.

Sara Arfeen Khan has now shared a few pictures from her baby shower on her Instagram handle. Sharing the following pictures, she has captioned them as, "A “Baby Shower” is a happy custom where friends and family come together and shower mum-to-be with lots of presents and lovely wishes. It’s a beautiful phase in a woman’s life and I’m very grateful for this day. Thanking my friends for being a part of my best moments and special thanx to my beautiful family for organising such a lovely baby shower."

Sara also shared another set of pictures from her baby shower, thanking her friends, family, official costume designers and photographers by writing, "Friends, family, fun... cakes, macaroons, confetti’s.... gifts, wishes & blessings... and to top it up, @seraphinematernity Making me look like a princess! what more could I ask for!? Thank you @p.b_photography22 and @sandras.point.of.view for capturing beautiful memories #love #happy #babyshower #pregnancyfashion #maternityfashion #instagood #picoftheday."

Earlier, we had told you that as per the reports, Sara had worn a Seraphine Maternity label for her godh bharai. For the uninitiated ones, it must be mentioned here that Seraphine Maternity specialises in maternity dresses. Sara had opted for a pale lilac dress and had ornamented herself with a floral tiara.

Sara Arfeen Khan had confirmed her pregnancy news to the TOI a few months ago and was quoted as saying, "The baby is due on July 8 and we are super excited. It doesn't matter if it's a girl or a boy. We are grateful to God for this beautiful gift, which has already changed our lives. It's a very personal matter and I had only shared it with very close friends and family. Besides, I have been in London since February." (Also Read: Shah Rukh Khan's Daughter Suhana Khan's Picture From Her Short Film Tells She Is Ready For Movies)

She had further gone on to share the feelings now that she is pregnant. Sara had retorted, "For the first few months, it was not sinking in that I'm going to be a mother. But now, it's finally sunk in, especially when I feel the baby move constantly. Nothing can match up to the feeling of my baby moving in my womb." She had further added, "I think that names are the hardest to finalise. We are still working on it."

Arfeen Khan and Sara Arfeen Khan had once shared their love story with an online tabloid. Arfeen was quoted as saying, “Sara was really sick; so much so, that she had to be admitted to the hospital. When I went to meet her, I knew I was going to marry her, though we did take a lot of time to finally walk down the aisle.”

On the other hand, Sara had shared, “When we met, I observed how he conducts himself. He appeared very calm, which is very different from who I am, because I am a hyper person. We developed a friendship first, and I always noticed how he used to deal with day-to-day situations. Before I was admitted to the hospital, I knew he liked me a lot. In fact, it was mutual. One day I told him that he will marry me. He started laughing, but we all know how it ended (laughs).”

Speaking reverently about her hubby, Arfeen, she had added, “Arfeen is weird but practical. My friend’s boyfriends always got them flowers and would say ‘I love you’ all the time. When Arfeen and I fought, he wouldn’t say anything. I knew he cared since he has always been there for me. I complained to him about why we don’t hold hands and he would ask, “Are you running away?” I have realised that one has to be consistent. Initially, everyone tries to impress their partner but eventually they stop doing that. So, it makes sense to be the person you are so that your partner can handle that 10 years later as well.” Arfeen, on the other hand, had gone to share, “It definitely wasn’t me. I’m not one of those guys — I show love, I don’t talk about it.” (You May Like: Saif Ali Khan And Kareena Kapoor Khan Enjoy The London Rain, Taimur Ali Khan Is Loving His Piggyback)