We value something when it is taken away from us! And now, we all understand what freedom to roam around means! Check out Sara Ali Khan's 'knock-knock' joke amidst the lockdown!

The year 2020 started on a scary note with a microbe threatening the existence of human life. For the first time ever, we have witnessed the world stopping its functioning. The roads are deserted, schools are closed and everyone is scared to even meet each other. In these difficult times, we truly understand the importance and luxury of freedom. But in these gloomy days when we see no ray of sunshine, it is important to believe that everything will be alright and we will sail through this storm. If you still cannot stay positive than Bollywood actress, Sara Ali Khan's 'knock-knock' joke will help you to laugh it off! (Recommend Read: Mika Singh Complimenting Chahatt Khanna As She Flaunts His White Shirt Is What 'Quarantine Love' Is)

We remember how much Sara loves the 'knock-knock' joke. Last year, she had shared a video with her brother. In the video, we could see her having fun while irritating her little brother, Ibrahim Ali Khan. The actress had enjoyed her knock-knock stint and asked her brother to say something really funny and really fast. To which, Ibrahim had said, "Knock knock". And that's how their fun video became everyone's favourite.

Amidst the nationwide lockdown, Sara teases her fans with the 'knock-knock' joke and this time it left her brother, Ibrahim facepalming himself. On April 8, 2020, Sara shared a video with Ibrahim. In the video, Sara can be seen saying. “Knock knock", to which Ibrahim asked, “Who’s there?”. Alongside it, the actress wrote, "Throwback to when you could... But for now #stayhome #staysafe and don’t go knocking." Take a look at it below:

Talking about the brother-sister duo's relationship, in an interview with the HELLO! magazine, Ibrahim Ali Khan had opened up on his bond with sister, Sara Ali Khan. He had shared, “The relationship we (Sara and I) share is just perfect – we rarely fight and that’s perhaps because we have a five-year gap between us. On occasions that we do, it’s over the stupidest things. We are very close and love each other a lot.”  (Also Read: Quarantine Diaries: Karan Johar's Kids Try On His Shades, Call Him Stupid) 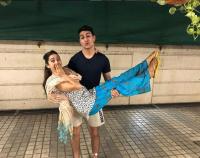 In an interview with the Mumbai Mirror, Sara Ali Khan had talked about her brother, Ibrahim’s acting skills and had said, “He does and from what I’ve seen of him on stage, he’ll be a better actor than me. Recently he gave me a page from his play. I’ve no idea if he had got his lines right because I couldn’t take my eyes off his face. He’s that good. But wanting to be an actor and understanding what it’s about and knowing this is what you want to do is a journey. I think he’s 99 per cent there.” (Don't Miss: Vishal Aditya Singh Opened-Up About His Fight With Ex-Girlfriend, Madhurima Tuli In 'Bigg Boss 13')

Well, we love Sara's 'knock-knock', sadly we cannot go and play it in real!