Recently, Sara Ali Khan was snapped by the paparazzi, heading to her car. Sara was all smiles as she was busy talking on the phone and it made her fans wonder if she was speaking to Kartik Aaryan.

Theirs is a relationship which began way before they signed their first film together and they have been all over the news from quite some time now. Meeting on the sets of a film, love blossoming between them and ending up in a ‘happily ever after’ seems to be too mainstream for this duo. The newest ‘IT’ couple of B-town, Kartik Aaryan and Sara Ali Khan are acing the neither admitting nor denying game, and they seem to be spending a lot of time together lately. (Also Read: Arjun Kapoor Reacts On Trolls Targeting Him And His Muse, Malaika Arora Over Their 12-Year Age Gap)

We loved how Sara Ali Khan had confessed her crush on Kartik Aaryan on Koffee With Karan season 6, and how the latter had expressed his admiration for the former on the same chat show. From waiting to catch a glimpse of their much-awaited date to hoping for these two to work in a film together, the nation has been rooting for this couple. And soon our hearts skipped a beat when an announcement of their first film together popped up on our social media timeline from Sara and Kartik. Sharing a beautiful still from their work-in-progress film, wherein Sara Ali Khan can be seen resting her head on Kartik Aaryan's shoulder, the Kedarnath debutante had captioned it, “Honoured, grateful and uncontrollably excited to be a part of Imtiaz Ali’s next! Starring @kartikaaryan & @randeephooda releasing on 14th Feb, 2020. Presented by Jio Studios @imtiazaliofficial @reliance.entertainment @wearewsf @maddockfilms. Shoot in progress! Imtiaz Ali”. And Kartik had written, “Honored to embark on a journey with my Favourite #ImtiazAli’s Next with @saraalikhan95 and @randeephooda releasing on 14th Feb, 2020 #JioStudios @imtiazaliofficial #DineshVijan @reliance.entertainment @wearewsf @maddockfilms @imtiazaliofficial Aur ji haan, issi film ki shooting chalu hai”.

On June 7, 2019, Sara Ali Khan was snapped by the paparazzi, stepping out dressed casually and heading to her car. But what grabbed everyone’s attention was the smirk and the expression on her face as she continuously talked to someone on the phone. Sara was all smiles as she was busy talking on the phone and it made her fans wonder if she was speaking to her crush-turned-costar, Kartik Aaryan. Sometime back, Sara Ali Khan and Kartik Aaryan were snapped by the paparazzi enjoying a gala time together as they laughed, cracked jokes and held hands together. It made us eagerly await to see the time when Sara and Kartik will be officially dating. We have been drooling over the all-candid off-screen camaraderie of the real-life couple-in-the-making. (Also Read: Raj Kummar Rao And Patralekhaa Recreate Shah Rukh Khan-Kajol's DDLJ Climax Scene, It Screams Love)

On June 5, 2019, Sara Ali Khan and Kartik Aaryan had celebrated Eid together by visiting a mosque. And in order to avoid getting mobbed by an ocean of their beloved fans, Sara and Kartik had covered their faces. While Kartik had covered his face with a handkerchief, Sara had draped her face with her dupatta. Kartik had shared his Eid special selfie with Sara and had captioned it as, "Eid Mubarak". Do you remember how Sara Ali Khan’s Simmba co-star, Ranveer Singh had played Cupid and had introduced her to Kartik Aaryan at Lokmat Most Stylish Awards 2018? Not only their fans, but the industry people are also vouching for this lovely jodi. At the award ceremony, Kartik, Sara and Ranveer were present under the same roof and after introducing them to each other, while the Love Aaj Kal 2 co-stars were busy exchanging pleasantries, Ranveer made a hand-heart and pointed towards them! Here’s the video:

Even Sara Ali Khan got her wish fulfilled when she went on a date with her crush, Kartik Aaryan, a few months back. Sara perfectly fits for the Om Shanti Om dialogue, ‘Kehte hain agar kisi ko dil se chaho, to poori kainaat use tumse milane ki koshish mein lag jaati hai…’ as she got her ‘dream date’ with Kartik. Kartik and Sara had opted for a romantic candlelit dinner date instead of a coffee date, and we couldn't help but gush over their pictures from the night. Kartik and Sara had also posed with their fans and were all smiles as they enjoyed their dinner date at a restaurant in Delhi. (Also Read: Karan Tacker And His Rumoured Girlfriend Shreya Chaudhry’s Social Media PDA Is Giving Us Goals) 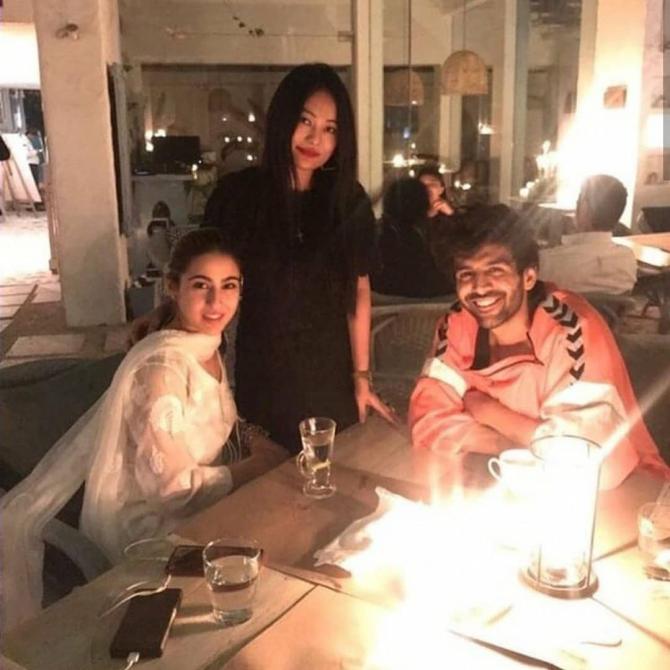 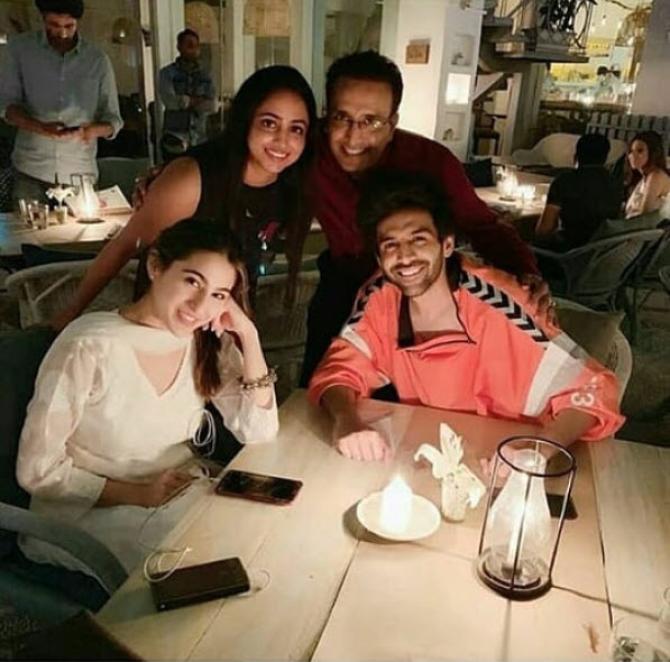 What do you think, is Sara Ali Khan talking to Kartik Aaryan or someone else? Let us know!