On his twins, Shahraan Dutt and Iqra Dutt’s tenth birthday, Sanjay Dutt informed his fans that he has emerged as a winner in his battle with cancer.

While we had lost Nargis Dutt, Vinod Khanna, Rishi Kapoor, Irrfan Khan and many other celebrities to the 'dangerous C', when Sanjay Dutt had announced that he was diagnosed with lung cancer, it had left his fans heartbroken. Life had put Sanjay and his family to yet another test and we were sure that just like always, they’ll emerge through it as a winner. Sanjay was treated for cancer at Kokilaben Dhirubhai Ambani Hospital. The reports were rife that Sanjay has won the battle against cancer and it had made his fans delighted. (Also Read: Sanjay Dutt's Daughter Trishala Dutt's 'I Love Grandma' Post For Nargis Dutt Will Make You Nostalgic)

October 21, 2020, marks to be the tenth birthday of Sanjay Dutt and Maanayata Dutt’s twins, Shahraan Dutt and Iqra Dutt. To wish the little ones on their special day, Maanayata posted a twinning in yellow picture with the birthday twins and wrote, “Happy birthday my babies... celebrating the first double digit birthday already... time just flies!!! I wish you courage, strength... health, happiness, patience and peace. And the serenity to make right decisions. Seeing you grow into beautiful wise children has made my life easy and blissful...God bless you both!! #10thbirthday #love #grace #positivity #dutts #beautifullife #thankyougod.” 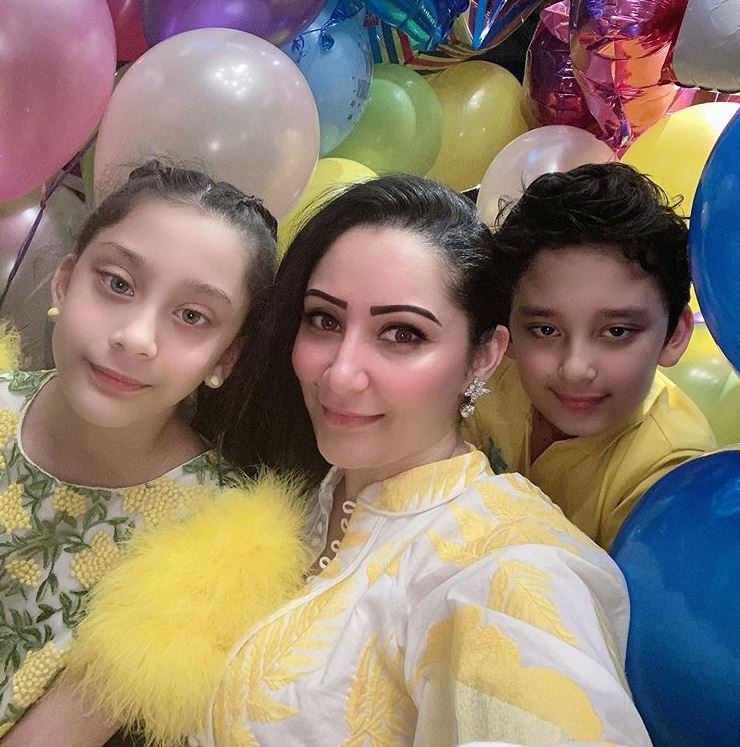 It is the moment of double celebrations for the Dutt family and Sanjay Dutt took to his IG handle to reveal why! On his twins, Shahraan Dutt and Iqra Dutt’s birthday, Sanjay informed his fans that he has emerged as a winner in his battle with cancer. In his note, Sanjay wrote, “The last few weeks were very difficult time for my family and me. But like they say, God gives the hardest battles to the strongest soldiers. And today, on the occasion of my kid’s birthday, I am happy to come out victorious from this battle and be able to give them the best gift I can- the health and well being of our family.” 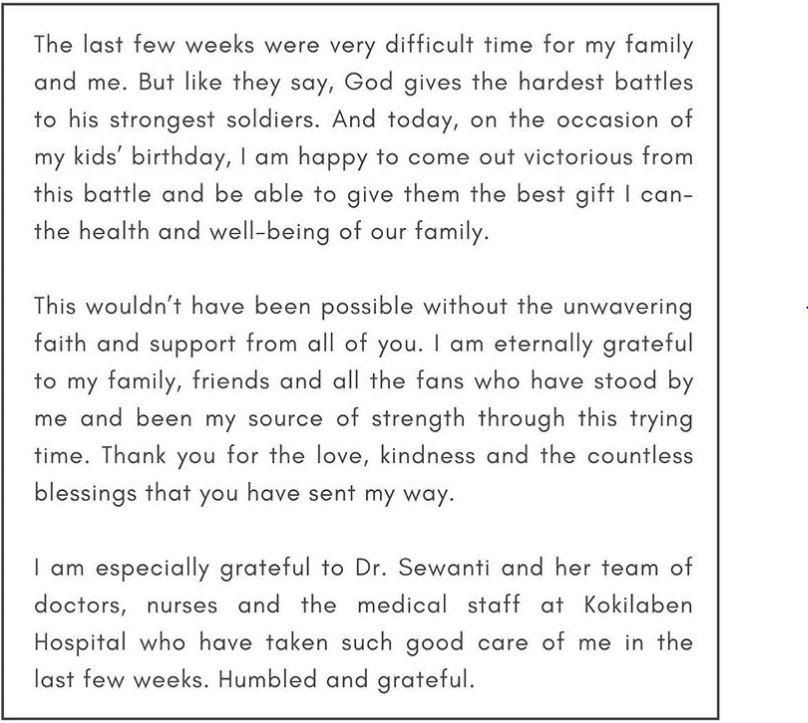 Expressing gratitude towards fans and well-wishers, and being grateful to the medical team of Kokilaben Dhirubhai Ambani Hospital, Sanjay Dutt continued, “This wouldn’t have been possible without the unwavering faith and support from all of you. I am eternally grateful to my family, friends and all the fans who have stood by me and been my source of strength through this trying time. Thank you for the love, kindness and the countless blessings that you have sent my way. I am especially grateful to Dr. Sewanti and her team of doctors, nurses and the medical staff at Kokilaben Hospital who have taken such good care of me in the last few weeks. Humbled and grateful.” (Also Read: Sanjay Dutt Was Once Beaten With Shoes By His Father, Sunil Dutt When He Had Found About His Smoking) 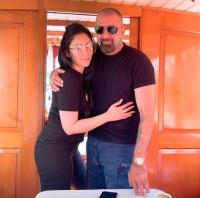 Due to Sanjay Dutt’s cancer diagnosis, the Dutt family had a low-key Ganesh Chaturthi celebration at their home this year. On Ganesh Chaturthi, Sanjay had given a glimpse of the celebrations by posting a beautiful picture with his wife, Maanayata Dutt, and had captioned the post as “The celebrations aren't as huge as they used to be every year but the faith in Bappa remains the same. I wish that this auspicious festival removes all the obstacles from our lives and bless us all with health and happiness. Ganpati Bappa Morya.” On which, his daughter, Trishala Dutt had commented with an array of hearts. 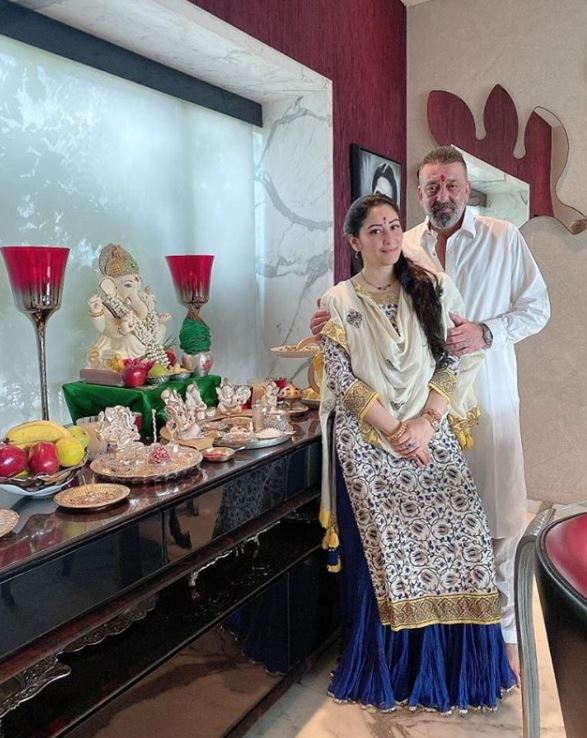 To mark Ganesh Chaturthi 2020, Maanayata Dutt had posted an adorable all-smiling picture of her twins, Shahraan Dutt and Iqra Dutt. Striking the same pose and wearing colour-coordinated outfits, Shahraan and Iqra were smiling from ear to ear in the picture and Maanayata had thanked God in her caption, which could be read as “Sands are shifting.... God...protect your peace...answer your prayers #love #grace #positivity #dutts #ganpatibappamorya #beautifullife #thankyougod.” Trishala Dutt had sent her prayers through the comments section by posting an array of folded-hands emojis and a heart emoticon. (Also Read: Did You Know Alia Bhatt Worked As An Assistant For Her Mother, Soni Razdan For This Movie?) 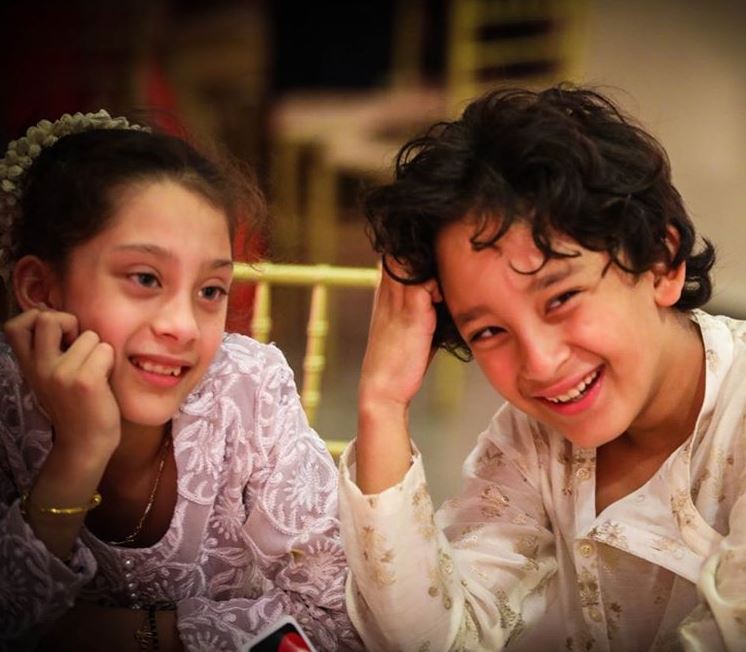 Here’s wishing a very happy birthday to Shahraan and Iqra, and heartiest congratulations to Sanjay on emerging as a winner!