One picture of Sanjay Dutt that has gone viral on the social media post his lung cancer diagnosis, is with his first wife, Richa Sharma. Sanjay and Richa's throwback photo is all about sweet memories.

Losing someone to cancer makes you hope that one day, 'cancer' remains as only a zodiac sign. But life doesn't stop for anything or anyone so, cancer shouldn't stop you either. Adding the worst news of 2020, the reports of Sanjay Dutt being diagnosed with lung cancer has made his fans heartbroken. Sanjay has a family history of battling with cancer as his mom, Nargis Dutt had succumbed to pancreatic cancer in 1981 and his first wife, Richa Sharma too, had brain tumour. (Also Read: This Is How Sanjay Dutt Came To Know About His Lung Cancer Diagnosis Amidst COVID-19 Test [Details])

On August 12, 2020, Sanjay Dutt had announced a break from work for medical treatment and had urged his fans to not speculate anything regarding his health. Soon, it was confirmed that he is diagnosed with lung cancer and if reports are to be believed, he will head to the US for treatment. Even Sanjay's mother, Nargis Dutt and his first wife, Richa Sharma had gone to the US for treatment. During their respective treatments, Sanjay had juggled between India and the US, managing his professional commitments and personal life. Ever since the news of Sanjay Dutt being diagnosed with lung cancer had made it to the headlines, family, friends and fans have been pouring in heartfelt notes for him. One picture of Sanjay that has gone viral on the social media is with his first wife, Richa Sharma. The throwback picture seems to be from a function as Richa looked gorgeous in a traditional suit while Sanjay looked charming in his signature long hair look. Sanjay and Richa's throwback picture is all about sweet memories.

Sanjay Dutt and Richa Sharma were blessed with a daughter in 1988, whom they had named Trishala Dutt. Since Richa's demise, Trishala has been staying with her maternal grandparents in the US. On November 7, 2018, Trishala had taken to her IG feed to give Dutt fans a glimpse of the ‘just married’ couple, Sanjay and Richa. Their throwback picture did take us on a nostalgic trip and we just couldn’t stop staring at the then-newly-wedded couple. Trishala had captioned the picture of her parents as “A selfie est. 1987 #justmarried #thesimplelife #treasuredmoments #memories.” (Also Read: Sanjay Dutt's Sister, Priya Dutt Recalled An Incident When Nargis Dutt Thought Sanjay Was Gay) 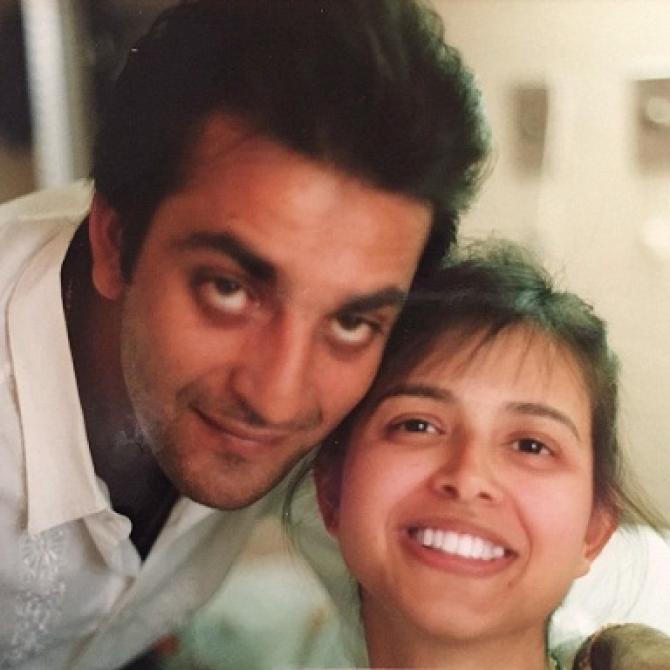 To announce his break from work for some medical treatment, Sanjay Dutt had posted a note on his social media profiles, which could be read as "Hi Friends, I am taking a short break from work for some medical treatment. My family and friends are with me, and I urge my well-wishers not to worry or unnecessarily speculate. With your love and good wishes, I will be back soon!" Later, film critic, Komal Nahta had tweeted confirming the news of Sanjay's cancer diagnosis, "Sanjay Dutt diagnosed with lung cancer. Let’s pray for his speedy recovery."

Thanking well-wishers for their concern about her husband, Sanjay Dutt's health and urging them to refrain from 'unwarranted rumours', Maanayata Dutt, in her official statement, had said, "I thank everyone who has expressed their well wishes for Sanju's speedy recovery. We need all the strength and prayers to overcome this phase. There is a lot that the family has gone through in the past years but I am confident, this too shall pass. However, it is my heartfelt request to Sanju's fans to not fall prey to speculations and unwarranted rumours, but to just help us with their ongoing love, warmth and support. Sanju has always been a fighter, and so has our family. God has yet again chosen to test us to overcome the challenges ahead. All we seek is your prayers and blessings, and we know we will emerge as winners on the other side, as we always have. Let us use this opportunity to spread light and positivity." (Also Read: When Maanayata Dutt Was Asked About Taking Over Sanjay Dutt's Life And Rejection By His Sisters) We know Sanjay is a fighter. We wish more power to him!