Sania Mirza's son, Izhaan Mirza Malik enjoys an immense following, all thanks to his cuteness! Recently, we spotted the little munchkin flaunting his new kicks gifted by Parineeti Chopra. 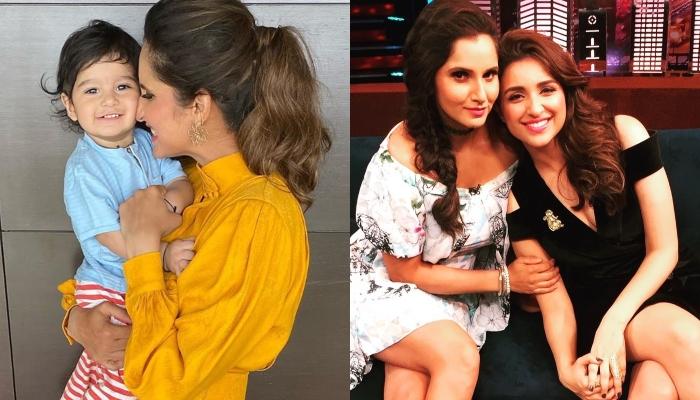 The moment a woman embraces motherhood, she no longer remains the main character of her story. In fact, she happily gives away the protagonist role to her baby. The entire family celebrates the new baby and wants to hold him/her in their arms. But it is the maasi of the baby, who is the most excited after the parents as she cannot wait to pamper the little munchkin. Whether you call her aunt, maasi or khaala, they have a full plan to spoil her sister's baby. And an exactly similar relationship is shared between ace tennis player, Sania Mirza's son, Izhaan Mirza Malik and her best friend, Parineeti Chopra. (Recommend Read: Mira Kapoor And Shahid Kapoor's Unseen Wedding Reception Picture Is Major Throwback, Star Wife Posts)

We all know Sania and Parineeti's friendship goes way back in time. They share an irreplaceable bond with each other. And when Sania gave birth to her little boy on October 30, 2018, Parineeti was the happiest. We remember she had taken to her Instagram handle and  had shared a cute picture with her nephew and had demanded to keep the munchkin. She had expressed her excitement in a cute caption that could be read as "I’m a khaala now!!!! Izzu is edible and I want to eat him, but for now, I’m allowing him to eat my hand @mirzasaniar Can I keep this child forever."

On April 22, 2020, Izhaan's official Instagram handle, which is managed by his mommy, Sania shared a cute picture of the baby boy. In the picture, we can see Izhaan flaunting his new kicks which were gifted by his khaala, Parineeti Chopra. The post was captioned as "Drop it like it’s hot. Ps- Thanks Pari khaala for my yeezy’s @parineetichopra". Check it out below:

For those who don't know how Parineeti Chopra and Sania Mirza became friends, let us give you some insight. The gorgeous actress had revealed the details of the same on Neha Dhupia's show, BFF's with Vogue, wherein, she had shared, "You know that’s how we became friends because she in some interview said ‘I would like Parineeti to play me in my biopic’ and I remember she was playing the US Open and she called me from there in the middle of the night at 2-3’o clock in the morning. She called me and said ‘Hi this is Sania Mirza, she said ‘I just wanna say that you know I have given an interview yesterday and it’s all over the country and it’s all on front pages and I felt it was my responsibility to tell you, why it all happened’ and I said ya but that’s really sweet of you like to say that." (Also Read: Karan Johar's Kids, Yash Johar and Roohi Johar Try Singing And Karan's Reaction Is Unmissable)

Well, we love Izhaan's kicks gifted by his khaala, Parineeti Chopra! What about you?