Sania Mirza Welcomes 'Jiju', Asad In The Family, Shares A Cute Picture With The Newly-Married Couple

Sania Mirza Welcomes 'Jiju', Asad In The Family, Shares A Cute Picture With The Newly-Married Couple

It is a pleasure to witness your sister getting married to her 'mister' and yesterday, Sania Mirza's 'not-so-anymore' baby sister, Anam Mirza tied the knot with her dream man, Asad Azharuddin! 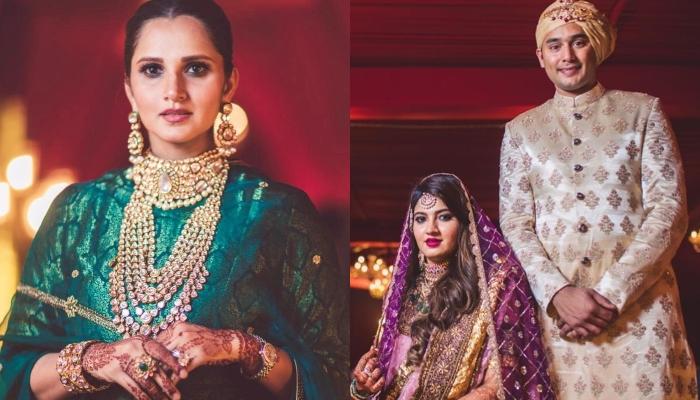 We made our first pies together and played in the sand. We shared secrets and ice creams while holding each other's hand over the years. Then comes a day when she is all set to tie the knot, our eyes are teary as we bid adieu to our 'darling sister', holding her lehenga and playing our role as bridesmaid. Ah, saying goodbye to our sister as she goes away with her mister is never easy. And yesterday, on December 11, 2019, Sania Mirza's baby sister, Anam Mirza said 'Qubool Hai' to her dream man, Asad Azharuddin. (Recommend Read: Kapil Sharma And Ginni Chatrath Express Gratitude On Their First Anniversary For Newborn Baby Girl)

Sania's sister, Anam was looking gorgeous as a Muslim bride. She had opted for a Hyderabadi khada dupatta ensemble in pink which turns a bride into a princess. She had added more colour to her look with a purple-hued sheer dupatta which she had carefully tucked on her head. She had completed her look with a choker neckpiece, a long necklace, a maang teeka and a paasa that made her look regal. On the other hand, her husband, Asad had picked a beige sherwani with a matching golden turban. 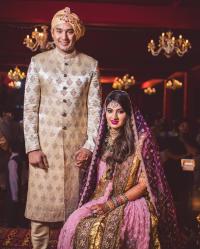 Today, on December 12, 2019, Sania took to her Instagram handle and shared a cute picture with the newly-married couple. In the picture, we can see, Sania happily posing with Anam and her jiju, Asad. The ace tennis player looked gorgeous as she had picked a deep green-hued sharara for her sister's wedding. Alongside it, she wrote, "Welcome to the family @asad_ab18 " Take a look at the picture below:

For those who don't know, Anam is a fashion stylist and a curator. She is the mind and heart behind her sister's gorgeous public looks and owns her own label. For quite some time, there have been rumours of Anam and Asad's dating. However, the star-sister never accepted her relationship with Asad. But in October 2019, Sania had disclosed the news of her sister exchanging the wedding vows and being a winter bride. She had also revealed that they had gone to Paris for Anam's bachelorette trip. 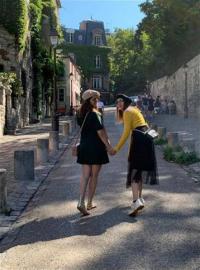 Anam's grand wedding celebrations had started with a cute bridal shower which was attended by her sister and friends. In the series of pictures, we could see Anam donning a gorgeous pink tulle skirt with a white t-shirt and a floral wreath. Along with the beautiful pictures, she had written, "Life happens, and there are moments you feel so damn grateful. I've been feeling that for a whole week now. While life was happening I looked around yesterday at my Bridal Shower and I realised I've been lucky enough to find the best of friends and family. Absolutely thrilled and grateful. Let's kick start #AbBasAnamHi." (Also Read: Paarul Chauhan Posts A Heartfelt Wish For Hubby, Cherag Thakkar On Their First Wedding Anniversary)

Then on December 9, 2019, Anam had taken our hearts away with her blue-coloured lehenga which she had donned for her mehendi night. She gave us princess feels with a half-open hairdo. 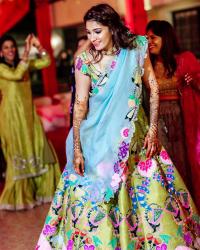 For the unversed, Anam was earlier married to Akbar Rasheed and had tied the knot on November 18, 2016, in Hyderabad. However, the two had parted ways after one-and-a-half years of marital bliss. As per a report in Pinkvilla, a source close to the Mirza family was quoted as saying, "The reason for the split is still unknown but we believe the divorce proceedings have come through. Meanwhile, Anam continues to focus on being the stylist for her sister and running her fashion outlet." (Don't Miss: Rani Mukerji Hosted A Unicorn-Themed Birthday Party For Her Daughter, Adira Chopra [Pics Inside])

Well, we wish Anam and Asad, the happiest life together! 'Hey mister, take care of my sister'! This is our first thought whenever we meet our sister's misters. After all, only a bridesmaid knows, the joy and pain of seeing her 'dearest sister' go away to make her own world with a new set of parents, siblings and husband. No matter how much bossy