Sanaya Irani And Mohit Sehgal's Romantic Getaway In Switzerland, Check Out Pics And Videos Inside!

Sanaya Irani And Mohit Sehgal's Romantic Getaway In Switzerland, Check Out Pics And Videos Inside!

One of the loveliest couples from telly world and Miley Jab Hum Tum fame actors, Sanaya Irani and Mohit Sehgal said ‘I do’ to each other on January 25, 2016, in a beautiful destination wedding in Goa. The lovebirds met on the sets of the show and fell for each other. Ever since then, the two have been together and their relationship has only grown stronger with each passing day. (Also Check: Significance Of 'Haldi' Ceremony; 10 Reasons Why It Is Important For Soon-To-Be Bride And Groom)

Sanaya and Mohit were recently on a vacation spree. The lovebirds were enjoying their ‘us’ time in a romantic getaway in Swiss alps. Both of them are travel lovers and keep exploring different places around the world. And this time, it was Switzerland for them!

Ever since they left for their vacay, Sanaya and Mohit shared some lovely pics on social media and are undeniably giving some serious couple travel goals. Sanaya and Mohit stayed at the St. Moritz resort and were travelling via the Swiss Travel System. This is the world's densest public transport. Following are the pictures and videos of the cutesy couple, check them out and you will go green with envy (*wink*):

Before leaving, Mohit seemed to be super-excited as he shared a picture with the caption that read, “I am sure everyone must have dreamt of going to #swizerland in their childhood. Even I did and now it’s going to come true and that too with the person I the most @sanayairani. When will we reach? Sooooo excited.”

Sanaya and Mohit have been giving some serious relationship goals all this while. They know exactly how to make each other feel loved and special. Sanaya had once said, "Sometimes when we don’t spend time together, Mohit gives me surprises like flowers, breakfast in bed, date nights and the like’’ and Mohit, on the other hand, can’t stop bragging about what a wonderful cook his wife is.” (You May Also Like: Feroz Khan Married A Single Mother, Left Her And Children For An Air Hostess But Never Married Her)

Mohit, on the other hand, was once quoted as saying, "Sometimes, I think that Sanaya’s favourite hobby is feeding me. She has been experimenting in the kitchen, trying new recipes. She’s a good cook, so dinner is always a treat for me.’’ (Don't Miss: Sunny Leone Shares A Heartfelt Post On One-Year-Anniversary Of Bringing Her Daughter Nisha Home)

For the ones who don’t know, Sanaya has been a significant part of many hit shows namely, Left Right Left season 2, Miley Jab Hum Tum, Iss Pyaar Ko Kya Naam Doon?, Chhanchhan and Rangrasiya. Not just television, Sanaya was also seen in Aamir Khan and Kajol starrer, Fanaa. Mohit, on the other hand, made his television debut with the hit youth-based show Miley Jab Hum Tum, where the two gave their hearts to each other. Then after that, he was also seen in Qubool Hai and Sarojini- Ek Nayi Paheli. (Also Check: Sonam K Ahuja And Anand S Ahuja's Skype Lunch Date Proves Long Distance Brings Hearts Closer)

Mohit and Sanaya, there is no doubt about the fact that you two make a stunning couple together. 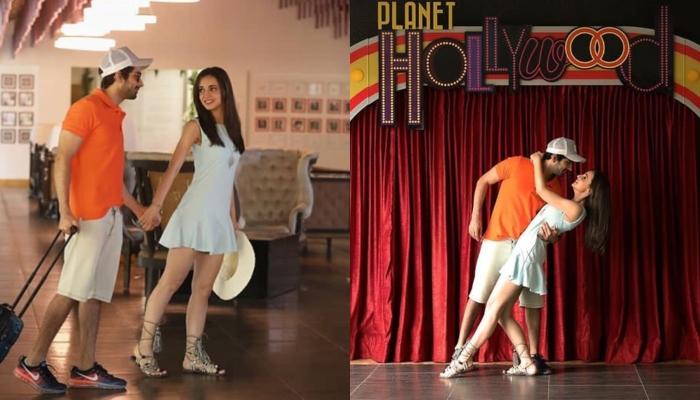 After playing crucial roles in famous shows namely, Left Right Left season 2, Miley Jab Hum Tum, Iss Pyaar Ko Kya Naam Doon?, Chhanchhan and Rangrasiya, Sanaya Irani has made it to the list of top television actresses. In addition to this, she has also tried her luck in Bollywood