Sana Khan looked ethereal in a traditional red bridal ensemble for her wedding. Check out the picture below! When you find the right person, nothing else matters. What matters is your happiness, which resides with that person, and you wish to spend an eternity with them, holding their hands. It seems Sana Khan, who had quit Bollywood sometime ago, found her 'Mr Right'. Sana khan tied the knot with Mufti Anas from Gujrat on November 19, 2020. And now, she has shared a picture from her wedding ceremony. (Recommended Read: Kriti Sanon Calls Her Mom And Dad The Definition Of 'Happily Ever After' On Their Anniversary)

Sana Khan is known for her stint in Bigg Boss 6 and her short role in Salman Khan starrer superhit film, Jai Ho. Some time ago, Sana Khan had quit the film industry and had deleted every evidence of her connection to showbiz, from her IG handle. A few moments ago, Sana Khan took to her IG handle to share a beautiful picture with her husband, Mufti Anas from her wedding. Sana looked ethereal in a traditional red bridal ensemble. She donned a red lehenga with heavy golden border, a heavy matha patti and layered neckpiece adorned her overall look. Sana captioned her post as "Loved each other for the sake of Allah. Married each other for the sake of Allah. May Allah keep us united in this Duniya. And reunite us in jannah. Fabi ayyi ala-e rabbekumaa tokazzebaan. Which of the favours of your lord will u deny. #sanakhan #anassayed #nikah #married #20thnov #alhumdulillah." Sana Khan had gotten married to Mufti Anas in Surat, in an intimate ceremony. According to reports in SpotboyE, Sana was introduced to her husband by Bigg Boss fame, Ajaz Khan. We had stumbled upon some pictures and videos from the wedding ceremony, and needless to say, Sana had looked like a fairy in a white ensemble for her wedding.

Sana Khan had quit the world of entertainment citing religious reasons. The actress had announced her decision by sharing a long letter, in which she had expressed her thoughts and happiness on embarking on a journey. She had posted the same on her IG handle and had captioned her post as "My happiest moment. May Allah help me n guide me in this journey. Aap sab mujhe dua Mai Shamil rakhe." (Also Read: Shilpa Shetty Kundra's 'No Filter' Love For Hubby, Raj Kundra On Their 11th Anniversary Is Goals) 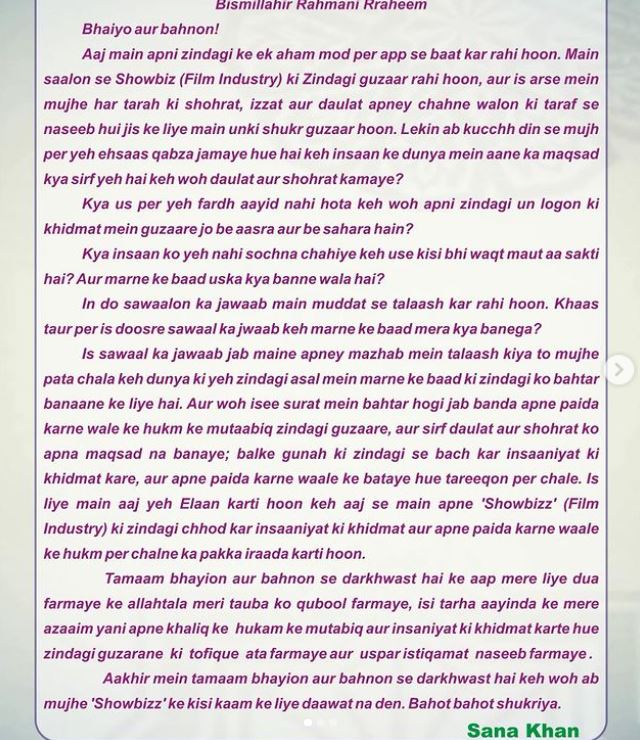 Sana Khan had dated choreographer, Melvin Louis for some time but the couple had parted ways on bad terms. After their breakup, Melvin had shared a cryptic post on his Instagram handle which had gone viral. In the post, Louis could be seen wearing a t-shirt with a caption that had read, "Bulati hai magar jaaneka nahi". In response to which, Sana had hosted a live video chat on her Instagram handle and had opened up on her ugly breakup. In the video, Sana was seen narrating what had gone wrong between her and Melvin and how she had found him cheating on her. 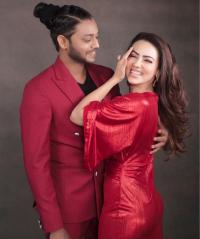 n the live video session, Sana could be seen sharing the reason why she had chosen the medium to narrate her side of the story. She had said, "My life is not a movie, and I won't get any box office success by maligning a person. I don't want another Sana Khan case to happen." Sana had also shared how Melvin had used her name to become famous and had forced her to make their relationship public. The actress had stated, "He kept pushing me to make our relationship official just after Valentine's Day last year. He kept forcing me to post our pictures on Instagram and everywhere. I had to go for some media interactions, and he wanted me to talk about 'us'. That time I didn't realise that it was just to get fame." (Don't Miss: Babita Phogat Is Expecting Her First Child, Shares A Picture Flaunting Her Baby Bump) Truly said, if social media is a boon, which connects people with each other, bridging the gap of miles, it is also a curse which can have a severe effect on one's mental health. People use social media as a medium to lash out on whatever and whomsoever they find