Babita Phogat has given the good news to her fans as she has announced her first pregnancy. Scroll down to check it out!

Aamir Khan starrer, Dangal had brought the pehalwaan sisters, Geeta Phogat and Babita Phogat immense fame as the film had showcased their real-life story and struggles. Since then, Geeta and Babita have become a major inspiration for all young girls, who dream of making their nation proud one day. (Recommended Read: Comedian Bharti Singh Arrested By NCB After She Accepted Consuming Drugs, 8.65 Gm 'Ganja' Recovered)

Talking about their personal lives, Babita Phogat had tied the knot with Vivek on December 1, 2019,  in an intimate ceremony with only 21 baraatis, ditching the concept of a big fat Indian wedding. Babita and Vivek had taken an extra phera, apart from the saat pheras, dedicating it to the 'Beti Bachao, Beti Padhao' initiative. And now, Babita has given the good news to her fans as she has announced her first pregnancy. Scroll down to check it out. A few hours ago, Babita Phogat took to her IG handle and shared a beautiful picture with her husband, Vivek. In the picture, Babita can be seen flaunting her baby bump in a white dress, as her husband caressed it. Along with the picture, Babita expressed her happiness on soon embracing motherhood and wrote, "Every single moment that I spend being your wife, I realize how lucky I am to live such an amazing life. You are my happy place." You complete me. I'm excited & waiting to start this new chapter in my life" in the caption. Check out the picture below: 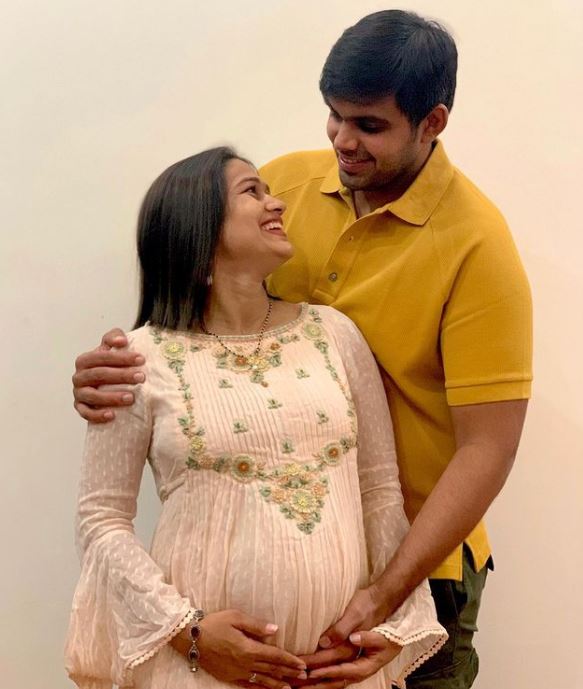 In an interview with The Times of India, Babita had revealed how she had met her husband, Vivek. She had shared, "It was an event for wrestlers at a hotel in Delhi where we first met. Bas wahan dosti ho gayi. We stayed in touch and in time, we realised that we liked each other. I like how he is very straightforward but still respects others." Babita Phogat's wedding was a special one as none other than the ace designer himself, Sabyasachi had helped her with her bridal ensemble. NDTV Goodtimes had shared a video on their Instagram handle from their show, Band Baaja Bride, as Babita Phogat was the first bride to be dressed on TV by the designer, Sabyasachi Mukherjee. Babita had looked ethereal in the video as Sabyasachi had decided on the final bridal look for her. The conversation between Sabyasachi and Babita had shown the latter's love for bindi and lipsticks. (Also Read: Sana Khan Gets Married To Mufti Anas From Gujrat After Quitting Bollywood [Pictures Inside])

According to DBPost, Babita had talked about how her father never allowed them to doll up and her wedding was a day to fulfil that desire. She had shared, "Father did not allow us sisters to doll up, but today the wish has been fulfilled. Today I am very happy after becoming a bride. Very happy after wearing a bridal dress. When we used to go to the wedding ceremony of other girls, we sisters used to wear bangles and rings many times seeing other girls. But Dad did not allow. He often said that your goal should be just wrestling. When the goal is achieved, then do the makeup. I am very happy about wearing a bridal dress." 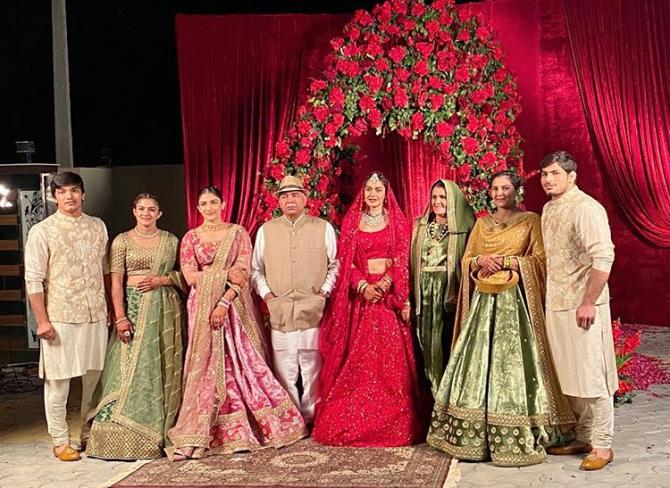 Babita Phogat often shares glimpses of her family time. Whether it is about celebrating festivals with her loved ones or posting adorable pictures of her nephew, Arjun Saroha, Babita never misses a chance of updating her fans about her personal life. On August 24, 2020, Babita had shared pictures of her 'pehalwaan pariwaar' having dinner together. In the pictures, we could see the Phogat sisters Geeta, Babita, Sangeeta posing with Vivek Suhag, Pawan Kumar Saroha and Dushyant Phogat. Along with the pictures, Babita had written, "Raat ko dinner ke samay poora pehalwaan pariwaar." (Don't Miss: Ankita Lokhande Feeds Vicky Jain's Nephew And Niece, Abeer And Abeera On Their 'Annaprashan')