Shilpa Shetty's Daughter, Samisha Shetty Kundra Will Have Her Annaprashan During Ganesh Utsav

Shilpa Shetty's Daughter, Samisha Shetty Kundra Will Have Her Annaprashan During Ganesh Utsav

Shilpa Shetty Kundra is excited for daughter, Samisha Shetty Kundra’s first Ganesh Utsav. The actress is all set to have her daughter’s Annaprashan ceremony during the celebrations. 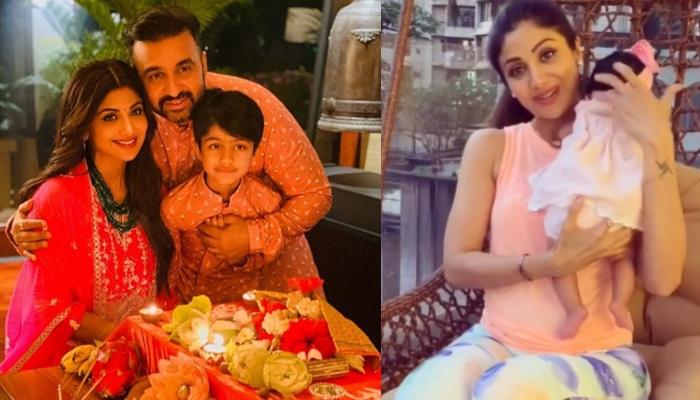 With the worldwide pandemic of COVID-19, we are forced to ditch all our celebrations. From birthdays, anniversaries to festivals, the ‘new normal’ has made us celebrate every important event of our lives within the four walls of our home. Every year the fun and enthusiasm around Ganesh Utsav is such that each one of us switch-on our devotional mode and never tires chanting ‘ganpati bappa moraya’. But this year, the scenario is completely different as there will be no dhol, dancing and playing with colours. Actress, Shilpa Shetty Kundra, who is known to celebrate the day with full galore will also have a low-key celebration this year. (Also Read: Karan Tacker Shares Last Year's Ganesha Chaturthi Photo, Rumoured GF, Shreya Chaudhry Drops A Heart)

Shilpa Shetty Kundra is the perfect example of doting wife and a hands-on mommy. The gorgeous actress had surprised all her fans when she had announced the news of embracing motherhood for the second time with the arrival of her little angel, Samisha Shetty Kundra on February 21, 2020, via surrogacy. Shilpa, is known to celebrate Ganesh Chaturthi in the most colourful manner but she will not be doing the same this year due to the pandemic. The gorgeous actress is quite excited as it is her daughter, Samisha’s first Ganesh Utsav.

Shilpa Shetty Kundra has welcomed Lord Ganesh home but unlike every year, this year, the family has not invited anyone. According to the reports of Bombay Times, Shilpa had stated, “This is the 11th year I have welcomed Ganpati Bappa home, and it’s even more special as it is Samisha’s first year. This is the first time I haven’t invited people over, so it is going to be a really small affair with just family members. Even my sister, Shamita, isn’t around as she is shooting in Kolkata.”

Shilpa Shetty and Raj Kundra’s daughter, Samisha Shetty Kundra has completed six months and is all set to taste her first solid food. Shilpa has revealed that her daughter will have her Annaprashan ceremony during the Utsav. While taking care of the social distancing norms, Shilpa said, “This pandemic has made us all realise a lot of things, but most importantly, it has shown us the difference between necessity and luxury, so we are just sticking to the basics. This year, I have done the decorations on my own. There is no fanfare and caterers, because there are no guests. We will conduct a Satyanarayan puja, and I will feed Samisha a little solid food, a ritual that we call Annaprashan. We had done the same ritual for Viaan (son), too. Though the celebrations will be low-key, they will be very special.” (Also Read: Shilpa Shetty Shares Video Of Samisha's First Ghaghra Choli As Family Plans To Twin For Ganesh Puja)

Last year, Shilpa's Ganesh Chaturthi celebration was an inspiration for all. The actress had posted pictures from her celebrations, wherein the entire family had twinned in yellow ensembles. Alongside the picture, the actress had written, "And... My GANNU RAJA is back. Our 10th year! The remover of obstacles and the Lord of success.. May He bestow us all with His blessings this Ganesh Chaturthi. While I'm spiritual and celebrate all festivals, I'm also responsible towards our Mother Earth and we have continued our tradition of having an #ecofriendly Ganesha idol. Ganpati Bappa Morya .PS: Love and celebration is all of us #TRIPLING."

Earlier, in an interview with the Mid-Day, the actress had talked about switching to an eco-friendly idol. She had stated, "As a celebrity, we have to be responsible for our actions. One must be the change they want to see. I live on the beach, and it was a heartbreaking sight after visarjan. The pollution it causes is massive. Hence, the decision to change 4 years ago." (Also Read: Soha Ali Khan's Little Daughter, Inaaya Makes Colourful Lord Ganesha To Celebrate Ganesh Chaturthi)

Happy Ganesh Chaturthi! May Lord Ganesha remove all the obstacles from our life.