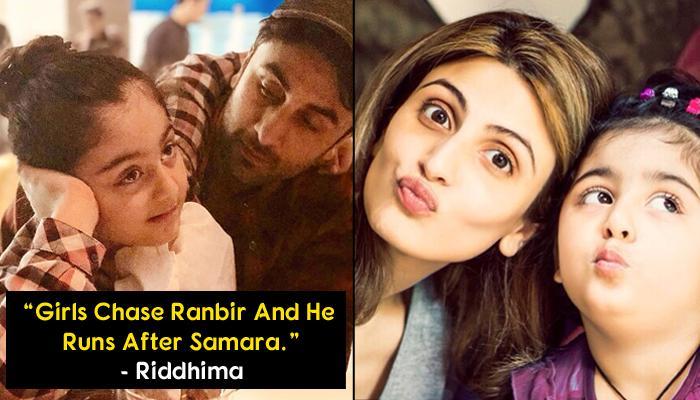 There is no doubt to the fact that the Kapoors are obsessed with the little angel of their house, Samara Sahni. Neetu Kapoor and Rishi Kapoor’s daughter, Riddhima Kapoor Sahni got married to a Delhi-based industrialist, Bharat Sahni on January 25, 2006. They embraced parenthood and welcomed their princess on March 23, 2011.

Recommended Read: After Showing Her Dancing Talent, Misha Plays Drum And Proves That She Is A Musical Baby

Samara, or as everyone fondly calls her as Sam, is the apple of everyone’s eyes. She is smart, intelligent, cute and a total draamebaaz. And why we say this? For that, you must look at the videos that her nani Neetu Kapoor or her father Bharat share on their social media accounts. This little one is the internet sensation at this age only. Though her mamu Ranbir Kapoor is not on social media, Neetu keeps everyone updated with the cute pictures of Ranbir and Samara. Here are some endearing pictures of mama-niece duo, which is a testimony to how much special Samara is in Ranbir's life:

Also Read: Taimur Ali Khan Looks The Cutest Baby Riding His Toy Bike, Look At The Face He Is Making!

And not just Neetu, Bharat also share pictures from their family vacations, festivals, Dubsmashes and some candid moments of Samara. Hailing from the family of Kapoor, who are prominent in the showbiz industry for almost nine decades, Riddhima never showed her inclination to join the glamour world. From being a star kid to a wife and mother and now an entrepreneur, she has created her own niche in the designing field. But it looks like her daughter is following the footsteps of her mamu and love being in front of the camera. When asked Riddhima about the most exciting role for her is of, a star kid, or a wife or a mother, or a jewellery designer and an entrepreneur; she was quoted as saying:

"Being a mother is by far the most exciting, satisfying and rewarding role in my life."

7-year-old Samara loves to travel with her family. Samara lives in Delhi and as we all know, Delhi is known for its pollution. The little one has taken the anti-pollution campaign quite seriously, so here’s a little gyaan from her shared by her father, Bharat on his Instagram account:

He captioned the video:

"This time of the year when most kids are falling sick, here’s a message from my 7-year-old #WakeUpDelhi"

In an interview earlier, Riddhima talked about Samara and what all she loves to do. She retorted:

"Samara loves herself. As soon we are ready to step out, she makes me take selfies of us in the car, pouting and posing with her. She loves the camera and loves singing, dancing, dressing up, putting on pretend make-up, enacting dialogues from my dad and Ranbir’s films and imitating just about anyone."

Showcasing the little munchkin’s interest in dancing and imitating her mamu’s films, here’s a video in which slays Galti Se Mistake song from the film, Jagga Jasoos:

It won’t be wrong to say that Samara is undoubtedly the summation of all the Kapoors with her awe-struck Dubsmashes and videos. Her videos and pictures are very popular on Instagram and her cuteness level is increasing by each passing day. Speaking about Samara in an interview, Riddhima remarked:

"She’ll keep asking me, "Mamma, why do I have to go to school? Let me help you in your jewellery business"; "Mamma, why do you get to wear pretty clothes, jewellery and make-up every day and why can’t I?" To a large extent I indulge her, as does everyone in the family. But I just want her to complete her formal education, as besides her naughtiness, she’s very bright and a thinker with an elephantine memory and sometimes, her thought processes befuddle me and make me wonder if she’s really only five. These days, kids teach you a lot."

Samara poses like a pro and loves being clicked even by paparazzi. Samara and Ranbir bonding is something that will make you go awe! Ranbir is extremely close to his sister Riddhima and dotes on his niece Samara. Talking about the same, Riddhima lovingly said in an interview:

"Samara is just like my dad — she is totally like him. She has him and Ranbir wrapped around her little finger and she means business. Girls chase Ranbir and he runs after Samara."

Riddhima and Bharat have launched an online kid apparel store, named after their daughter, Samara. Riddhima talked about the label to Bollywood Hungama and said:

"Sam and Friends is our clothing brand and named after our daughter, Samara. Bharat is into exports of garments and we always wanted to start our own retail brand. Samara won't be the face or model for it but we have taken a few photos of her wearing the brand which we may or may not put up. We made a launch video where we are talking about the launch day but after that we won't be using her as the model because she's too young for it. Samara is too chhotu for all this right now. We didn't want to use her face but just her name basically."

Also Read: 12 Famous Bollywood Star Kids Who Are Ruling The Internet Like How

Before the launch of the brand, Samara had a complain about her mom in an adorable video saying that she is never happy. Check out the video:

This is what Neetu captioned the video:

"Before the launch of @samfriends.in wanted to share this adorable clip where Sam complains that her mom is never happy (no mom is as they always want the best) love the way she ends with "I am not up for that mum""

Neetu revealed that their little chatterbox is also an amazing storyteller in this video:

And captioned it as:

"Mera chota sa storyteller!! Wat amuses me is the age the girl gets kidnapped 29 and 79"

Some delightful glimpses of her granddaughter in a single video, Neetu shared it on her Instagram:

And this is what the little girl wishes for:

Samara is one of the adorable star kid from the Bollywood industry. We are totally in awe of her cute pictures and videos. We wish her all the love and happiness in the world. She seems to be a star in the making. Her confidence in front of camera and genes of Kapoors, we all would love to see her on-screen.

Next Read: Mamu Salman Khan's Infectiously Adorable Moments With Ahil In This Video Are Too Cute To Miss