'Mom' fame Sajal Aly gets engaged to her rumoured boyfriend, Ahad Raza Mir in an intimate ceremony. Scroll down to check out their beautiful picture of new beginnings. There is nothing more beautiful than being in love! While the entire Tinseltown is celebrating love, Pakistani actress, Sajal Ali finally found her 'happily ever after' with rumoured boyfriend, Ahad Raza Mir. (Recommend Read: Arjun Kapoor Reacts On Trolls Targeting Him And His Muse, Malaika Arora Over Their 12-Year Age Gap)

Sajal proved her acting prowess as a Pakistani actress and then took Bollywood by storm with her film, Mom, wherein, she played the role of late legend, Sridevi's daughter. And while we eagerly wait to see her back on our screens, the actress recently confirmed her engagement with the love of her life, Ahad. It was in 2018 when their dating rumours started doing the rounds, but they had kept their budding love away from the media glares. 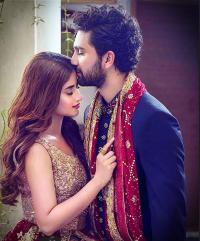 Looks like the wait is finally over as Sajal got engaged to Ahad on June 6, 2019, in an intimate ceremony. She took to Instagram and shared a beautiful picture of their new beginnings. She captioned it as, "Here's to new beginnings. Today we are happy to announce that with the blessings of our families we are officially engaged. Our special day will be even more special with the love and prayers of our family, friends and fans. Sajal & Ahad." In the picture, we can see the duo striking a mushy pose. While the bride-to-be looked gorgeous in a peach ensemble, Ahad complemented her with a coordinated beige kurta. Take a look at it below: 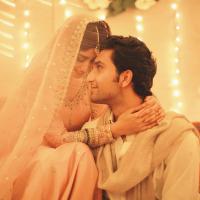 Sajal and Ahad's love brewed on their first show together, Yakeen Ka Safar. In an old interview with Karachistan, Ahad had talked about his experience of sharing screen space with Sajal. He had stated, "I was one of Sajal’s fans even before YKS – in fact when I knew she would be my heroine I immediately thought that I’m going to have to up my game. Working with her was brilliant. She is such a charming human being, very sweet and generous. She was very supportive throughout, helping me out with my accent and with words I didn’t know the meaning of. She’s also great fun to be around." (Also Read: Kareena Kapoor Khan Reveals Saif Ali Khan Was Nervous About Her Television Debut For A Major Reason) 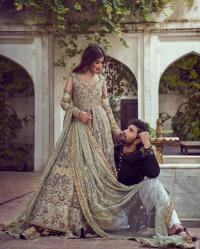 Later in an interview, Sajal had opened up about her relationship with Ahad, and had shared, "He’s very special to me, you want me to say something else? Abhi kay liyan itna hi sahe hai." 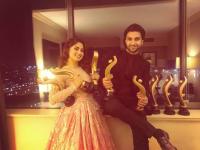 Sajal's parent's broken relationship had left a huge mark on her, and in an interview, she had stated that she is scared of getting married. She was quoted as saying, "To be honest I am scared of marriage and the whole rishta parade. Losing your own identity in your love for someone is wrong. I learned it with time, seeing relationships around me break. Trust takes time." (Don't Miss: Manish Naggdev Exposes Ex-GF Srishty Rode With An Open Letter, Divyanka And Kamya Support Him)

Well, looks like Ahad's love healed the heart of Sajal. Stay tuned for more news on her wedding!