Virat Kohli and Anushka Sharma had announced their first pregnancy in August, and if the reports are to be believed, Zaheer Khan and Sagarika Ghatge are also expecting their first child.

The year 2020 has been different from 2019 in a whole lot of ways, but even a pandemic couldn’t take away our happiness for the celebs on their baby announcements. While some of the most-loved celeb couples have already grown their families by one, some have announced that they are expecting their new little bundles of joy. Looks like after Virat Kohli and Anushka Sharma, a big congratulation is in store for Zaheer Khan and Sagarika Ghatge. Zaheer-Sagarika and Virat-Anushka’s love stories have made the age-old bond between Bollywood and cricket strong and both their relationships were solemnised in the year 2017. (Also Read: Sania Mirza Congratulates Hubby, Shoaib Malik As He Becomes First Asian To Score 10,000 T20 Runs)

After a similar kind of love story and less-than-a-month gap in their wedding dates, seems like the couples are all set to embrace parenthood at the same time too. In 2017, the wedding season had begun with the registered marriage of the former Indian pacer, Zaheer Khan and Chak De! India fame, Sagarika Ghatge, which was followed by a star-studded reception in Mumbai. Sagarika had announced her registered marriage with Zaheer by posting the first ever picture together as husband and wife. Sagarika had simply captioned it as “23.11.2017”.

Newlyweds, Sagarika And Zaheer's Honeymoon Pictures Are A Pure Bliss To The Eyes 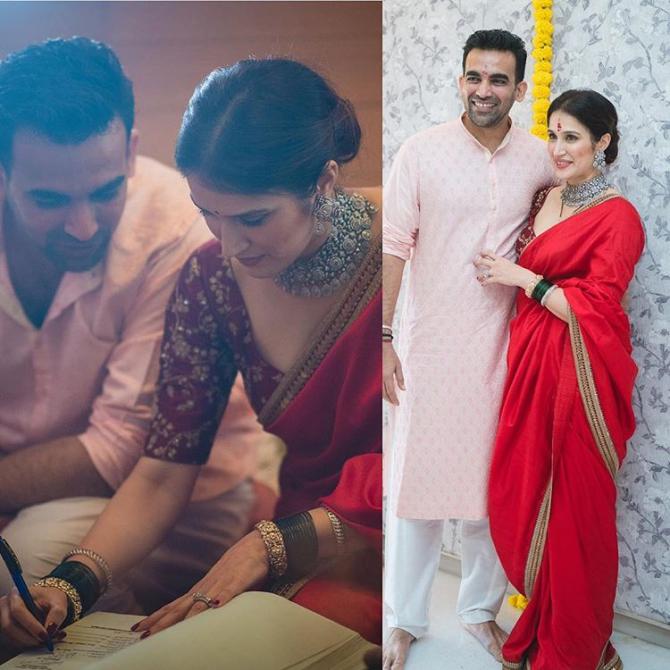 Virat Kohli and Anushka Sharma had announced their first pregnancy in August, and if the reports are to be believed, Zaheer Khan and Sagarika Ghatge are also expecting their first child. According to a Mumbai Mirror report, Sagarika is in UAE with Zaheer for the Indian Premier League and for the celebrations of the cricketer’s birthday, she had opted for a loose black dress, flaunting her baby bump. Even their friends have confirmed to the media portal that Zaheer and Sagarika will soon embrace parenthood.

On October 7, 2020, Zaheer Khan had turned 42 and while his wife, Sagarika Ghatge was busy enjoying the day with the birthday boy, it was only a day later that she had posted a heartfelt wish for him on social media. Creating an album on Instagram with her favourite memories with Zaheer, she had described him as her ‘best friend’ and the most ‘selfless person’ she knows. Sagarika had captioned her birthday post for Zaheer as “To my best friend, my love and the most selfless person I know. Thank you for being you. Not only me but everyone knows I would be lost without you. Happy birthday husband. May you get everything you desire and more. Love you.” (Also Read: Anita Hassanandani Opens Up On Her Pregnancy Journey, Hubby, Rohit Reddy Reveals His First Reaction) 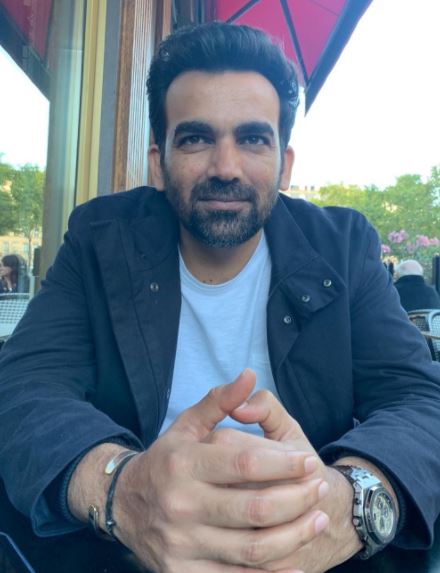 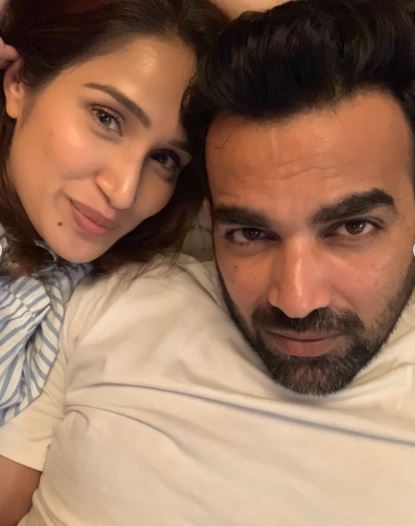 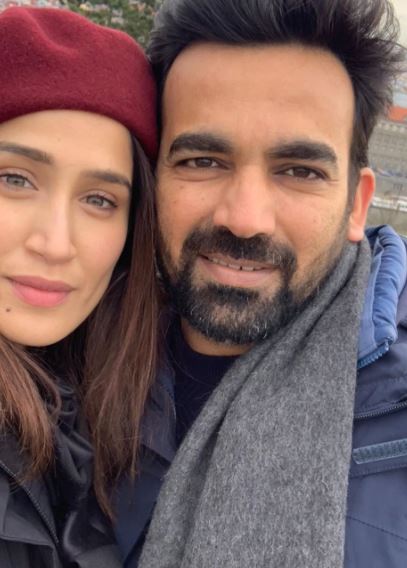 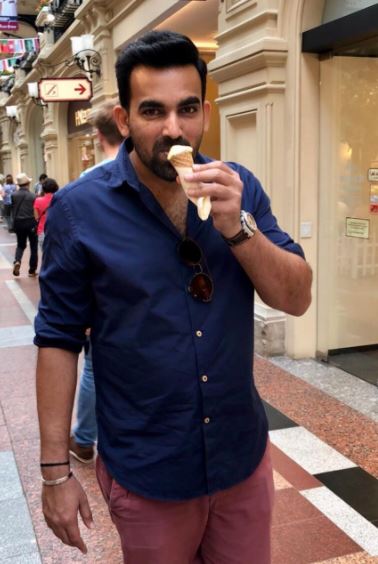 On January 8, 2020, when Sagarika Ghatge had celebrated her 32nd birthday, Zaheer Khan had wished his ‘lifelong entertainer’ with a couple of pictures on his IG handle. Sharing an on-couch beautiful selfie with Sagarika and a goofy picture of her, posing with her facemask on, Zaheer had captioned the post as “Happy Birthday SK. My love and lifelong entertainer.” 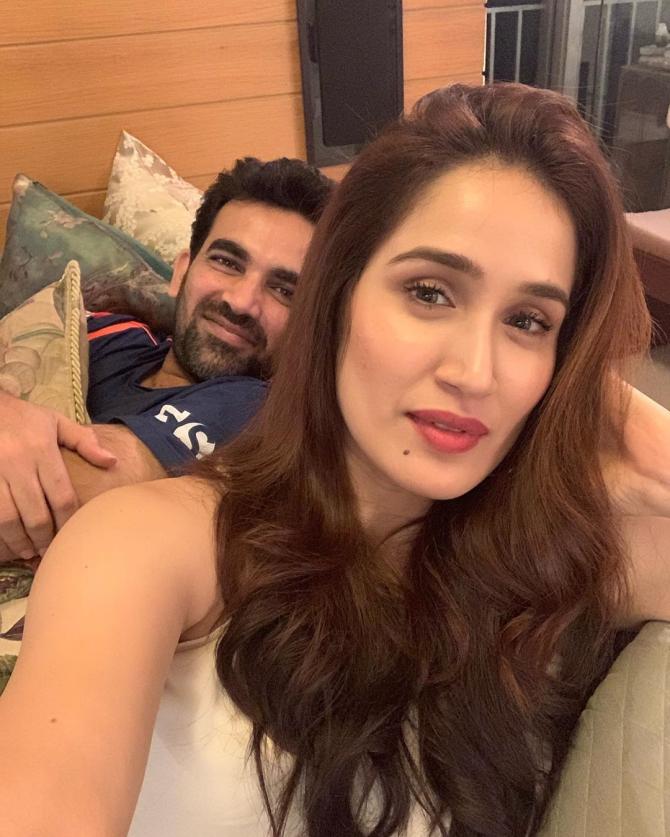 Zaheer Khan and Sagarika Ghatge had hosted a grand star-studded wedding reception at Taj, Colaba in Mumbai on November 27, 2017 and the highlight of the celebration was the love and fun-filled presence of Virat Kohli and Anushka Sharma. Sometime back, an unseen picture of Zaheer and Sagarika with Virat and Anushka from the former couple’s wedding reception celebration had emerged on social media, and the photograph had exuded nothing but royal vibes. Sagarika and Anushka had swooned us in Sabyasachi lehengas while their better-half’s had complemented them perfectly. In a 2017 interview with Bombay Times, Zaheer Khan had revealed who made the first move in their relationship and how things became serious with him and Sagarika Ghatge. Zaheer had remarked, "One person had to take the lead, and it was me (smiles). Things started to get serious when I actually told her about it. Before that we would always meet as part of a group. We would enjoy each other's company, but I wasn't sure if she liked me or not. So I just told her, "I would like to take you out for dinner, but it should be just you and me, not with the gang." She thought I was joking about it! We always felt there was something between us, but didn't say it. We have different personalities, but are similar in a lot of ways as well. She is quite choosy about who she hangs out with and so am I. We take our time to open up to people. We both are introverted to a certain extent." (Also Read: Anushka Sharma Blows Flying Kisses To Hubby, Virat Kohli During IPL Match, Radiates Pregnancy Glow) 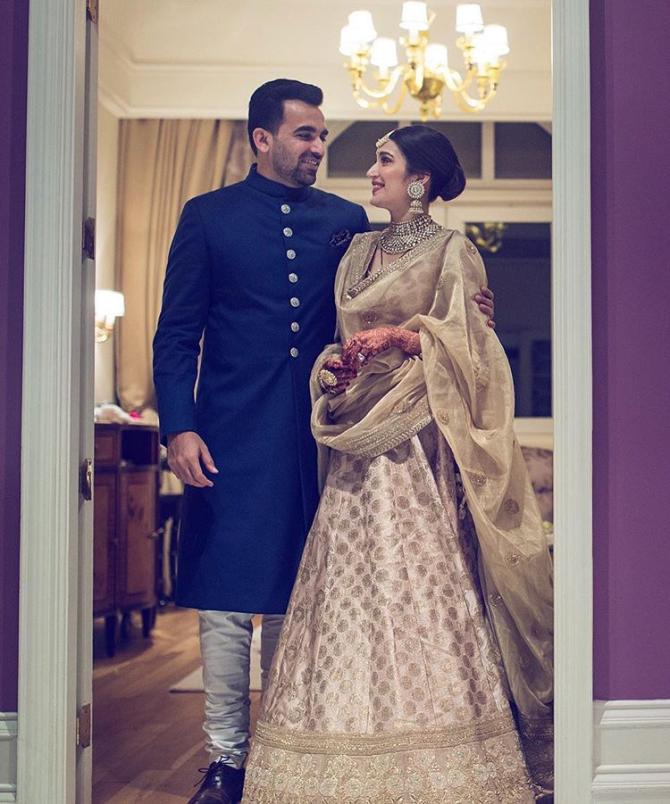 We can’t wait for a confirmation from Zaheer and Sagarika on their pregnancy rumours.