After the wedding of Virat Kohli and Anushka Sharma, her exquisite outfits became the highlight of occasions. The mastermind behind her breathtakingly gorgeous avatars is none other than ace fashion designer of Bollywood, Sabyasachi Mukherjee. As and when bridal couture is talked about, Sabyasachi is the name on everyone’s lips and somewhere or the other, every girl dreams of being a Sabyasachi bride on her wedding day. (Also Read: Invitation Card Of Deepika Padukone And Ranveer Singh's Third Reception Is Out And It's Very Elegant)

On BFFs with Vogue episode where Deepika Padukone and Anisha Padukone featured, the former expressed her desire to wear Sabyasachi for her wedding. When the host of the show, Neha Dhupia asked Deepika, which designer she would like to pick to design her wedding ensemble – Manish Malhotra or Sabyasachi Mukherjee, the 32-year-old actress replied, Sabyasachi. And yes, she did become a Sabyasachi bride, and not only that, from her post-wedding airport looks, wedding looks to reception looks, Deepika was styled by Sabyasachi Mukherjee.

Ranveer Singh Talks About Anushka Sharma Attending His Wedding Reception, Says It Meant A Lot To Me Deepika Padukone and Ranveer Singh got married on November 14-15, 2018, as per Konkani rituals and in an Anand Karaj ceremony, respectively. For both the weddings, Deepika and Ranveer were clad 'head-to-toe' in Sabyasachi outfits, as quoted by the designer himself. But later it turned out to be untrue when Sabyasachi himself clarified on his social media handle saying that it wasn’t exactly his creation. Just the veil and the accessories were by Sabyasachi, but the saree was from a popular silk store in Bengaluru, Angadi Galleria. Sabyasachi shared a post on his Instagram handle and wrote, “A NOTIFICATION: As per Konkani tradition, the bride's saree is gifted to her by the mother for her wedding. Deepika's wedding saree was given to us by her mother- Mrs Ujjala Padukone. We have just received information that the saree was bought from Angadi Galleria, Bengaluru and we would like to give due credit for the same.” Deepika and Ranveer hosted their Bangalore reception on November 21, 2018. The newlyweds shared a vintage-style portrait on their official social media handles and their fans can’t stop fawning at their style! While Ranveer opted for a Rohit Bal bandhgala, Deepika wore a shiny golden silk saree, a gift from her mother, Ujjala Padukone. Deepika was styled by Sabyasachi for her Bangalore reception. But did Deepika’s look remind you too of Anushka Sharma’s Delhi reception look? Well, it did to most of the Instagrammers and Sabyasachi Mukherjee was brutally trolled for styling the two actresses similarly. He was also trolled by some netizens for wrongfully taking the credit of Deepika's outfits. Some comments could be read as, “Change the hairstyle for once. Deepika has fabulous hair. That is enough for to look gorgeous. And again you give the same type golden clothes as Anushka”, “blouse saree jewelry not at all going with each other. And the makeup and hairdo is same as Anushka.”, “Not done.. so repetitive.. @deepikapadukone has her own elegance which u need to in hence.. not something you copied her like @anushkasharma”, “First Anushka, now Deepika. I'm tired of chipke huye bal. Ugh. It's like "Greasy hair, don't care."”. (Also Read: Deepika Padukone's Reception Saree Is A Gift From Her Mom, It's A Kanjeevaram Saree With Real Zari) 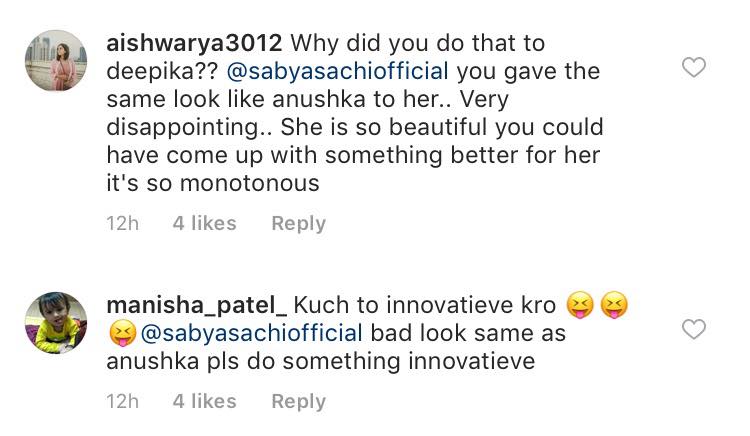 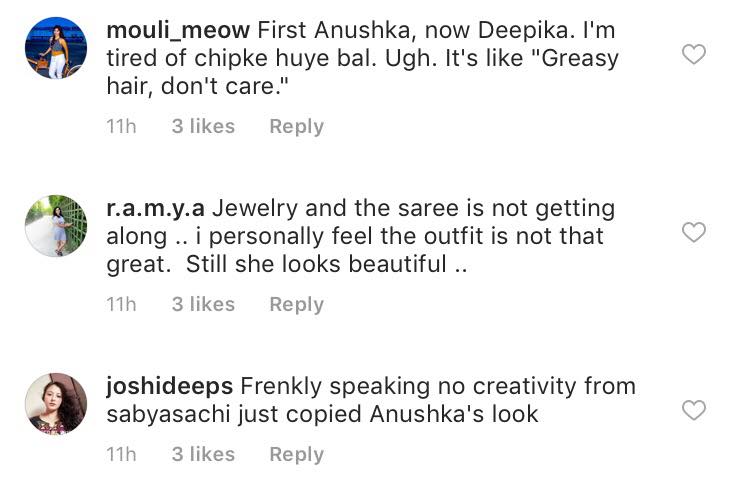 Here are some more comments, “The look is so gaudy that the jewelry looks fake. @sabyasachiofficial did the same mistake he did with @anushkasharma for which he had apologised later. @deepikapadukone what was your brief darling?”, “how about you stick to designing clothes and not styling people. How different is this from anushka's look or anyone else that you dress? Oily pulled back hair and small bindi. What a gorgeous woman sabotaged”, “Her look is very similar to Anushka Sharma look for her first reception”. 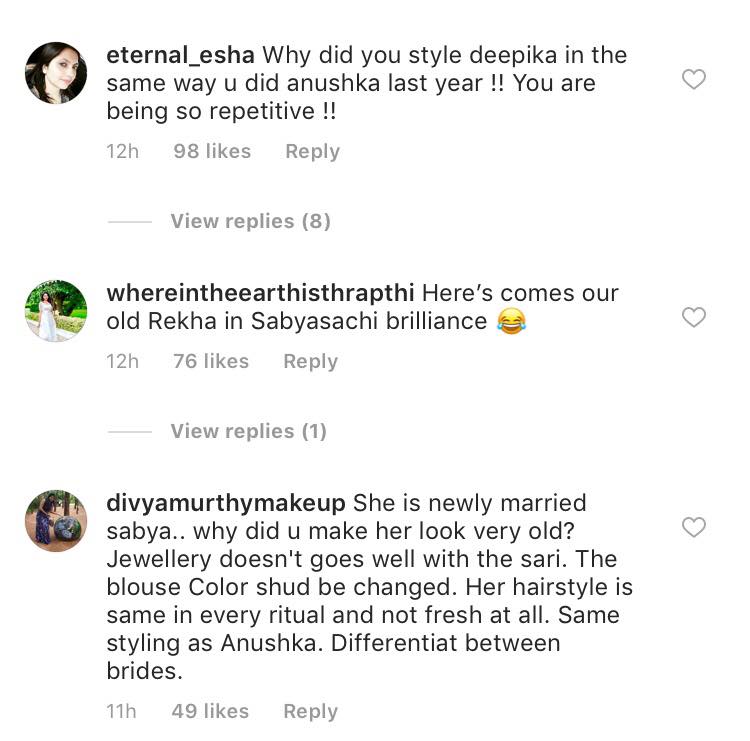 On the other hand, other netizens trolled Sabyasachi for styling same hairstyle for Deepika in all her functions. Some comments were, “Bored of same hair styles ..... centre parting and hair bun ....enough of it.”, “Blouse color doesn't suit.. You should hv given red, pink or blue for that matter instead of white... @deepikapadukone looks gorgeous but same hairstyle for all events why don't u guys try nice braid or let her hair loose... This look is repetitive.”, “Ye deepika kiya ganji kabootri bni hui hy .is se pyara tu ranveer lg ra.”, “Ugghh.... Do something different with Deepika's style!! It's nothing just a waste of money by tagging Sabyasachi brand name with this repeatedly same styling!!  moreover this oil based looking flat pattern hair tie!!! Sooooo boring”. 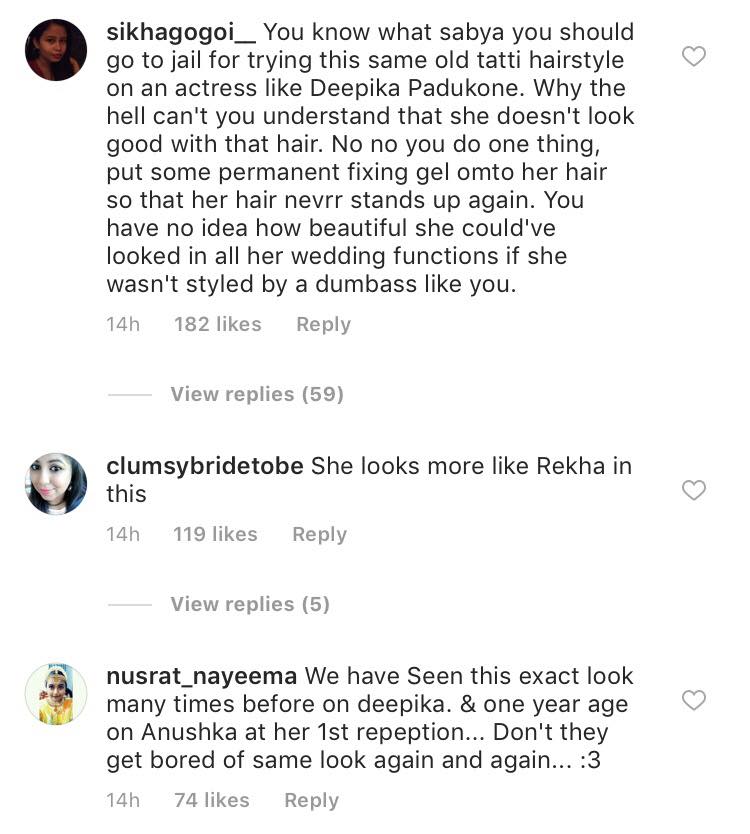 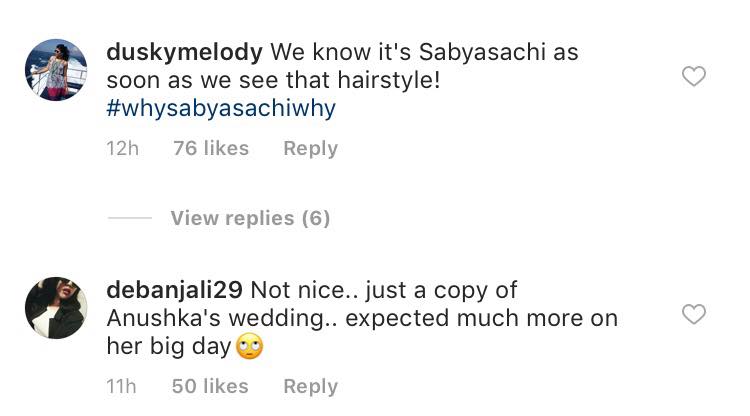 We came across another picture wherein Deepika's saree and even her blouse is similar to Kangana Ranaut's Sabyasachi outfit that she wore at Anushka Sharma and Virat Kohli's reception. Here, take a look: Sabyasachi also received a flak at Anushka and Virat’s wedding, when people questioned him about how her saree was a designer one. Speaking about the same, he had then stated, “I got a lot of flak for Anushka’s Delhi reception outfit because a lot of people said ‘Iss main designer kya hai?’ But the comments made me smile because that is exactly what we wanted to do, we wanted her to be accessible, we did not want her to sit in an ivory tower." (Also Read: Ranveer Singh's PDA For Wife Deepika Padukone On Their Bangalore Reception Is Too Cute To Miss) 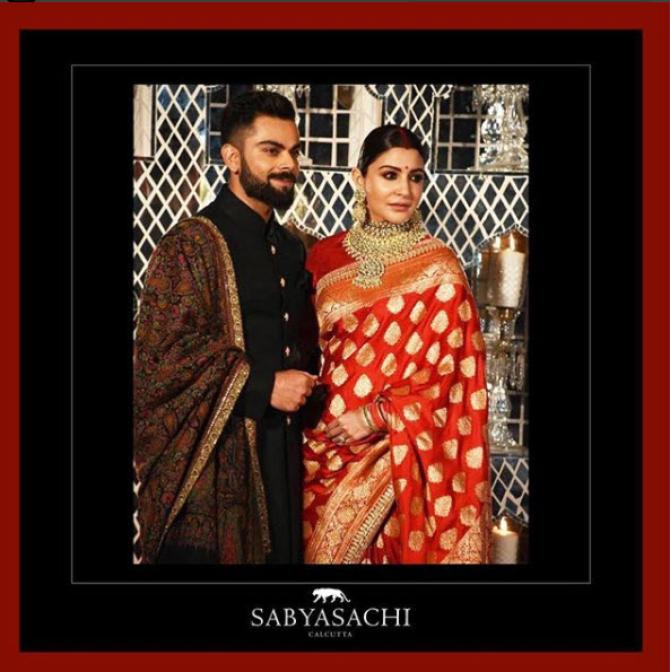