In the recent episode of 'Ravivaar with Star Parivaar', Rupali Ganguly opened up about her unique bond with Akshay Kumar and revealed why she started tying 'rakhi' to him on every Raksha Bandhan.

Television actress, Rupali Ganguly is one of the biggest television actresses right now. Although over the years, she has mesmerised audiences with her impressive performances in shows like Sukanya, Bhabhi, Kkavyanjali, Parvarrish – Kuchh Khattee Kuchh Meethi, Kahaani Ghar Ghar Kii, etc. No wonder it is the show, Anupamaa that made her a household name across the nation. Despite being such a popular actress, Rupali never let success sit on top of her head. That is one of the many reasons why she is admired by many in the entertainment industry.

Apart from her professional life, Rupali Ganguly is married to her long-time boyfriend, Ashwin K Verma. The couple got married on February 6, 2013. After which, in 2015, they were blessed with a baby boy, Rudransh, and since then, they're giving us major family goals with their cutesy pictures and vacation videos. In the upcoming episode of the popular show, Ravivaar with Star Parivaar, Akshay Kumar is going to appear to promote his recently-released film, Rakshabandhan. However, even before the episode's telecast, a small incident was revealed, and it featured Rupali Ganguly, who opened up about her bond with Akshay and shared an interesting story behind their brother-sister bond. The Anupamaa actress recalled the time when her father, late Anil Ganguly, who was a renowned veteran filmmaker, had signed Akshay Kumar for one of his films. Recalling the same, Rupali also added how it started a rakhi bond between her and Akshay Kumar. She said:

"Akshay is family to us. My father signed him on in his early days, and that's how we came to know him. My father is very proud of him, and always fond of him. So, because of my father Akshay Kumar became very close to me, and I started tying 'Rakhi' to him." 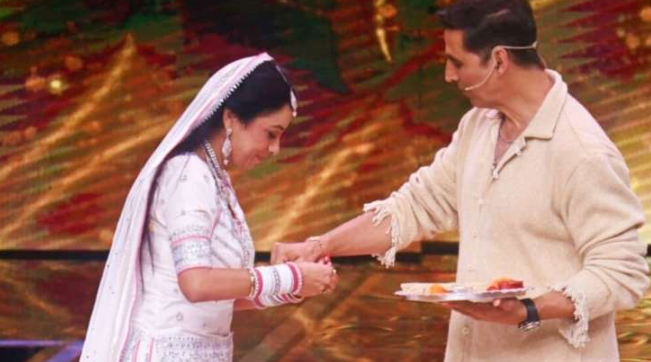 Going further in her revelation, Rupali Ganguly also added how her father, late Anil Ganguly used to admire Akshay Kumar for his punctuality. The actress also added that his father had already predicted back in the day that Akshay was made for stardom, and eventually, he would become one of the best actors in the industry. Rupali also revealed that when she used to go out for a walk with her father, Akshay was already up and doing his workout. She added:

"When we met him we were pleasantly surprised, and I remember my father saying that this person is made for stardom. Akshay is so punctual, hard-working and such a down-to-earth person. When we used to go outdoors for Papa's films, I remember Akshay used to wake up early in the morning at 4 am and workout." In the same episode, Rupali Ganguly also revealed that for the last 30 years, she wasn't able to tie rakhi to her brother, Akshay Kumar. The actress got a bit emotional, and after tying the rakhi to him, she thanked the show's makers, Ravivaar with Star Parivaar, for making it possible after a gap of 30-long-years. The beautiful brother-sister moment won everyone's hearts, and no wonder the respective fans of both the elite stars could not wait to watch this moment.

"The friendship that had been lost for almost 30 years has now been rekindled due to 'Ravivaar with Star Parivaar'." On the professional front, Akshay Kumar will be next seen in the film, Ram Setu.