Rubina Dilaik made one of the biggest revelations about her marriage with Abhinav Shukla on ‘Bigg Boss’ season 14. Deets Inside! Some relationships are not as happy as they seem because they too have their ups and downs. But what keeps them going? It is the sheer belief in each other and the faith in the relationship. There are many celebs, who have mesmerised us with their adorable bond, but a few of them have spoken not just about the highs but also about the lows of their lives. And television’s favourite couple, Rubina Dilaik and Abhinav Shukla are one of them. (Also Read: Puja Banerjee And Kunal Verma Host A Grand 'Naamkaran Sanskar' For Their Baby Boy [Videos Inside])

It was in the year 2018, when Choti Bahu-Sindoor Bin Suhagan fame actress, Rubina Dilaik and Silsila Badalte Rishton Ka actor, Abhinav Shukla had decided to hold each other's hands forever. The two had an intimate destination wedding on June 21, 2018, at Heritage Woodville Palace in Shimla in the classiest manner. And since then the two have been painting the town red. But their relationship was going through testing times and the two were on the verge to call it quits. However destiny had other plans as the two were signed for the reality show, Bigg Boss 14. And now, in the recent episode, Rubina made one of the biggest revelations about her and Abhinav’s falling marriage.

Rubina Dilaik and Abhinav Shukla are one of the most loved pairs in the BB 14 house and are lovingly called ‘Rubinav’. In the recent episode, Rubina made a shocking revelation about her marriage with Abhinav and shared that their relationship was falling apart. She also shared that they had given each other time till November, after which they would have been divorced. In her own words, “Humne ek dusre ko November tak ka time diya tha. We were about to get divorced. Agar yaha dono saath nahi aate, toh shayad sath bhi na reh paate (We had given each other time till November. We were about to get divorced. If we hadn’t come here we would not have been together).”

In an interview with the PTI, television actress, Rubina Dilaik had revealed the reason why she and her actor-husband, Abhinav Shukla had decided to participate in the show, Bigg Boss 14. The actress had stated, "To manage our private life in a public setup now, where cameras will constantly be on us, will throw challenges and reveal things about us. It's going to be a testing time for our relationship, but that motivates us. I didn't fit in any category, so I thought why to waste time. But they wanted both of us, which made it challenging." (Also Read: Sushmita Sen's Beau, Rohman Shawl Gets A Temporary Tattoo Of Her Name's Initials On His Forearm)

During the lockdown, Rubina and Abhinav had spent their time in the mountains with their families. On August 27, 2020, Rubina Dilaik had celebrated her birthday with her family, and it was her husband, Abhinav Shukla, who had shared a glimpse of it on his IG handle. The doting husband had shared a beautiful picture from his wife's outdoor birthday celebrations on the hills under the bright blue sky and the frame had looked dreamy from all angles. In the photo, we could see Rubina hugging Abhinav, while other members of her family had posed for the camera. Along with this cutesy picture, Abhinav had written, "Ruby ka Outdoor Birthday ! With @jyotikadilaik @rajatsharma_rj @kudratbhandari, Anu, Dhruppal and Sonu!" Rubina had dropped a one-word comment "blessed" on Abhinav's post.

A few months ago, in an Instagram live chat with ETimes TV, Rubina had candidly spoken about her relationship with her husband, Abhinav. She had talked about exploring new things in their relationship. In her words, "This period has been an intimate time with me. I am really working towards getting to know myself and my relationship with Abhinav. I am giving my home a touch of my own. Can't tell you how time flies away. I have been busier than ever. I used to think that shooting for 10-12 hours and then travelling for 3-4 hours is too much. But now I feel managing household duties are more difficult. Now I realise how grateful we should be to our mothers and our house-helps. This period has been an eye-opener." We agree with you. (Also Read: Rajeshwari Sachdev Misses Late Father-In-Law, VM Badola's Presence, Pens An Emotional Note For Him)

Well, we hope everything is fine in Abhinav and Rubina’s paradise! 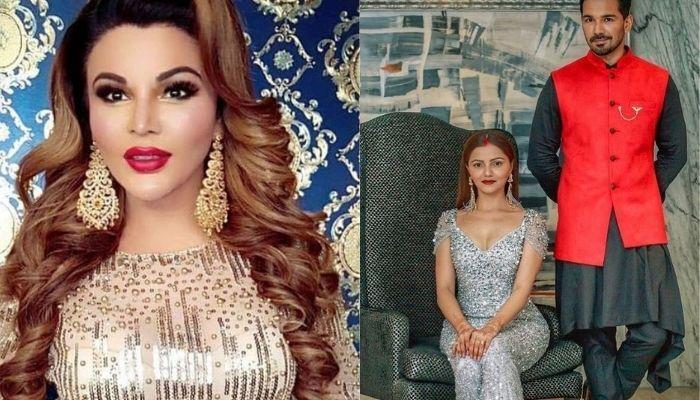