As Amrita Rao's most recognised film, 'Vivah' completes its 15th year, her husband, RJ Anmol celebrated the day and recalled what his mother had said after watching the film.

Bollywood actress, Amrita Rao has worked in various films like Ab Ke Baras, Ishq Vishq and Main Hoon Na. However, it was her role as 'Poonam' in Vivah, that had etched a deep impact in the minds of the audiences. No millennial child can say that they have not watched the movie with their family. In fact, such is the craze of the film that there are people, who have watched it hundreds of times. Not only that, it is quite often played on television. And now, the film has clocked 15th.

For the unversed, Amrita Rao and her husband, RJ Anmol (the host of Purani Jeans on Radio Mirchi) always like to keep their relationship low-key. After dating each other for seven long years, they had tied the knot secretly in Mumbai in the presence of their close friends and family. Owing to the fact, that they like to keep their relationship, private, we don't know much about their love story. But now, we got to know Anmol's mother's reaction after seeing Amrita onscreen. 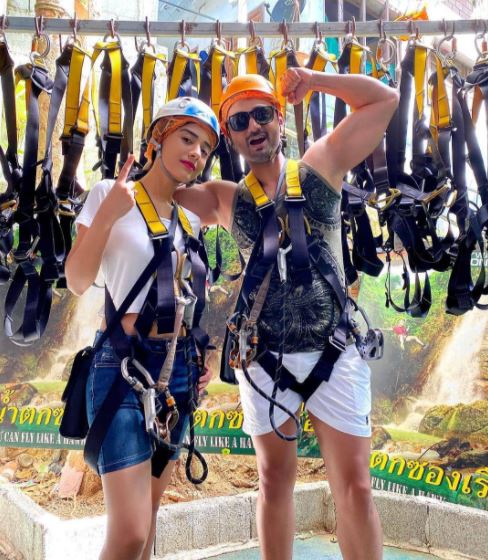 On November 10, 2021, as Vivah completed 15 years, Amrita Rao's husband, RJ Anmol took to his Instagram handle and shared a picture with his wifey and revealed that his mother had asked him to bring her a bahu just like Amrita's onscreen character. In the picture, Amrita wore a denim jumpsuit on a white T-shirt and Anmol can be seen wearing a grey-coloured shirt and pants. Along with the picture, he recalled a conversation with his mother and wrote:

''This Day-2006, I saw Vivah with my Family, in a Theatre(Delhi)… after the Film, My Mother said 'Beta bahu laana toh aisi lana'  I’m sure, Mothers Across the Country told This to their Sons, but like they say - Maa Saraswati meri Maa ki zubaan par baithi thi.'' A few months back, Amrita Rao's Jal Lijiye meme had gone viral over the internet. It was from one of the scenes from the movie, Vivah and the actress had recreated the scene with a twist. Taking to her Instagram handle, she had shared a Reel in which we could see her with a glass of water in her hand and had offered Jal to her fans, just the way she had offered it to Shahid Kapoor in the movie. Alongside it, she had written:

To add some twist to the video, Amrita Rao had then excused herself for a moment and had returned with a bucket full of water and had splashed it on the camera. However, it was her husband, Anmol's reaction that had won our hearts. He couldn't help but comment on this hilarious video. He had taken to the comments section had written, "She's So Naughty", followed by a laughing emoticon.

Amrita Rao and RJ Anmol had embraced parenthood in 2020 with the birth of a baby boy, Veer. In an earlier interview with The Times Of India, Amrita had spoken about the new phase of her life and had revealed the ‘hot’ compliment she had received from her husband, Anmol. Talking about the same, she had said:

“I never thought I would be such a hands-on mom. I could have an entourage around him if I wanted, but I don’t even have a nanny. Thanks to our profession’s flexibility, Anmol and I are doing everything ourselves, right from bathing the baby, massaging to nappy changing, and playing with him. And, yes, in the mirror I still look like that girl who’s come back home from college (laughs!), just a bit fuller though. Anmol tells me from cute I’ve become hot after I’ve had the baby. I think every woman looks hotter after she has had a baby!” Also Read: Rajkummar Rao's Gift To His Bride-To-Be, Patralekhaa Is The Proof Of His Love For Old School Romance

On the career front, Anmol was last seen in the film, Toofan. Amrita Rao and her RJ-husband, Anmol Sood, believe in keeping their personal life private. Though they are popular in their respective fields, Amrita and Anmol had still managed to keep their relationship under the wraps. A few days back, the adorable couple had started their YouTube series, Couple Of Things. Through the