Rishi Kapoor Receives A Heartwarming Welcome At Home By His Kids, Ranbir Kapoor And Riddhima Kapoor

Rishi Kapoor Receives A Heartwarming Welcome At Home By His Kids, Ranbir Kapoor And Riddhima Kapoor

On September 10, 2019, Rishi Kapoor and Neetu Kapoor were snapped at the airport as they made their way towards 'home sweet home' after '11 months and 11 days' in the US for his cancer treatment.

It is the most heartbreaking moment when our favourite celebrities announce being diagnosed with a life-threatening disease. But it makes us equally proud to see them fight against it, overcome the illness like a phoenix and spread positivity through their journey. Be it Irrfan Khan, Sonali Bendre, Nafisa Ali or Tahira Kashyap, the brave cancer survivors have inspired their fans with their journey and had spread awareness through their positivity, strength, optimism and hope. Veteran actor, Rishi Kapoor too, became a source of happiness and positivity during his 11 months of cancer treatment in New York. (Also Read: Shah Rukh Khan's Birthday Wish For Gauri Khan's Mother, Savita Chibber Is 'Funny And Full Of Life')

Rishi Kapoor’s wife, Neetu Kapoor had recalled an incident in a recent interview, about how her New York diaries post with the celebs visiting her ailing husband had given strength and hope to other patients. Neetu ji had narrated, “I used to post the pictures on his Instagram just to keep the positivity going. I never put pictures where he was down and out. Once, I was waiting for the elevator in the hospital when he (Rishi) was admitted and a young boy came and told me ‘my father is going through the same thing and he was very depressed, we kept showing him your pictures and said see Rishi ji is so happy and he is getting treated and those pictures made him come here and he wants to go through the treatment. I feel so nice that I helped somebody gain confidence that it can be dealt with.” 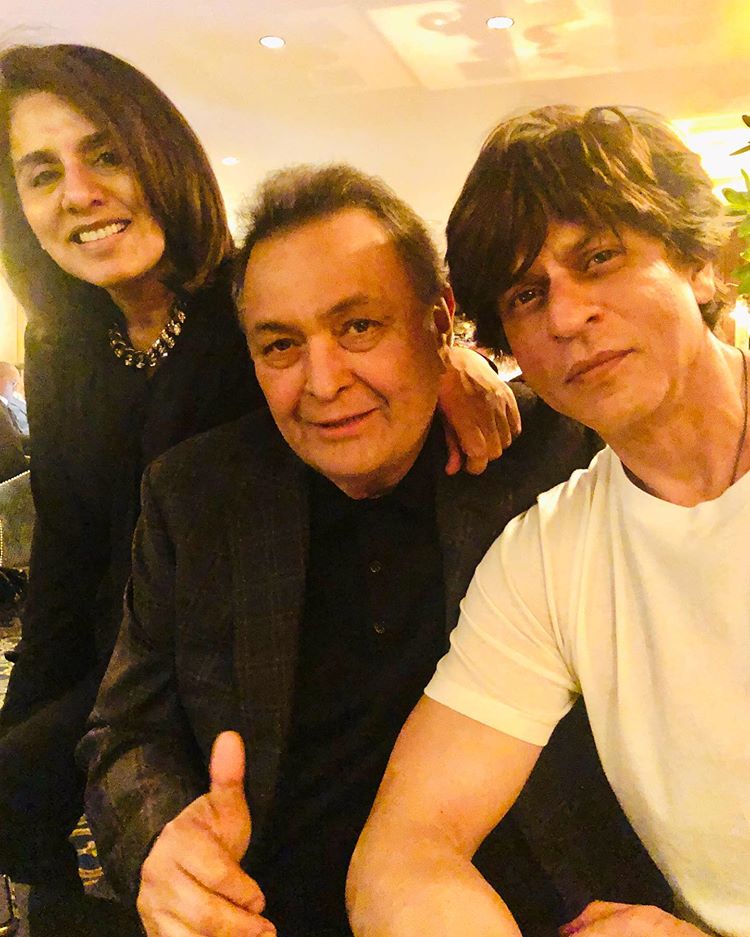 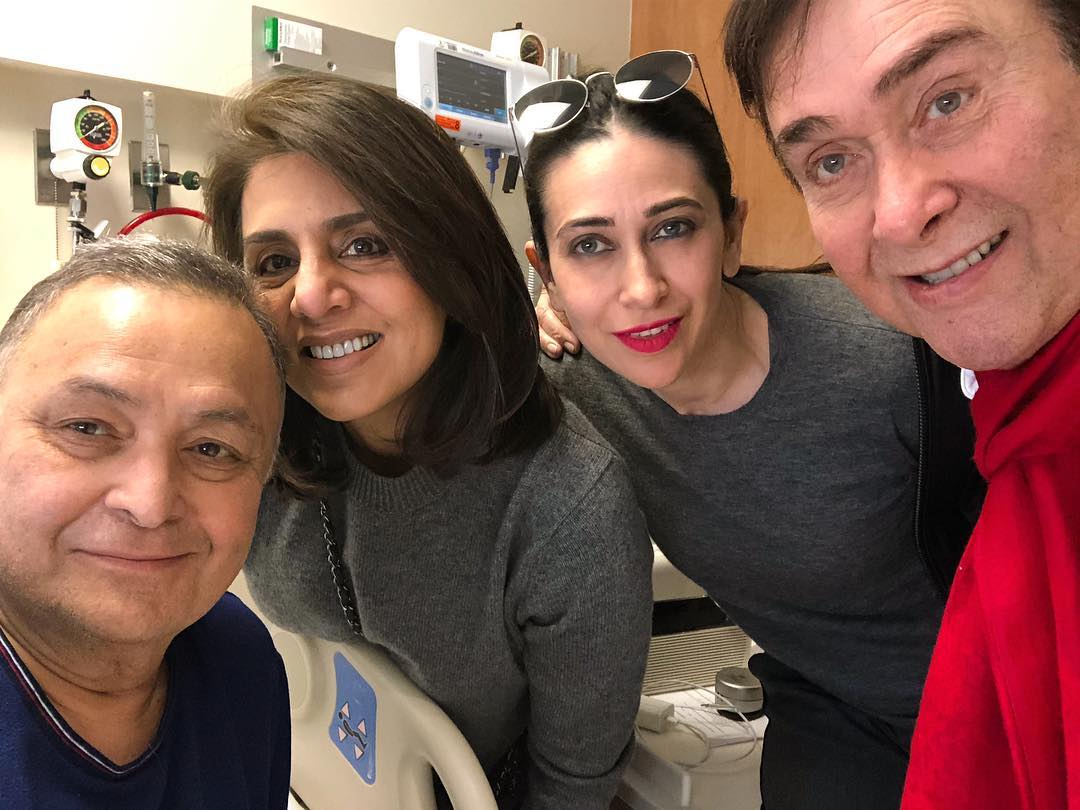 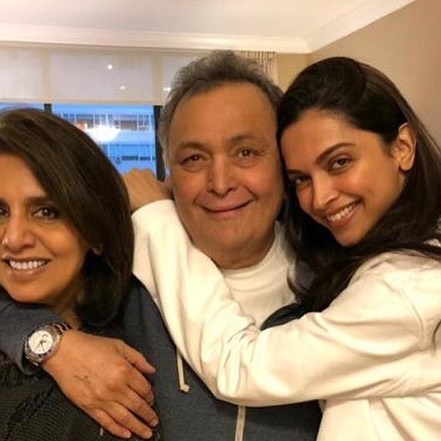 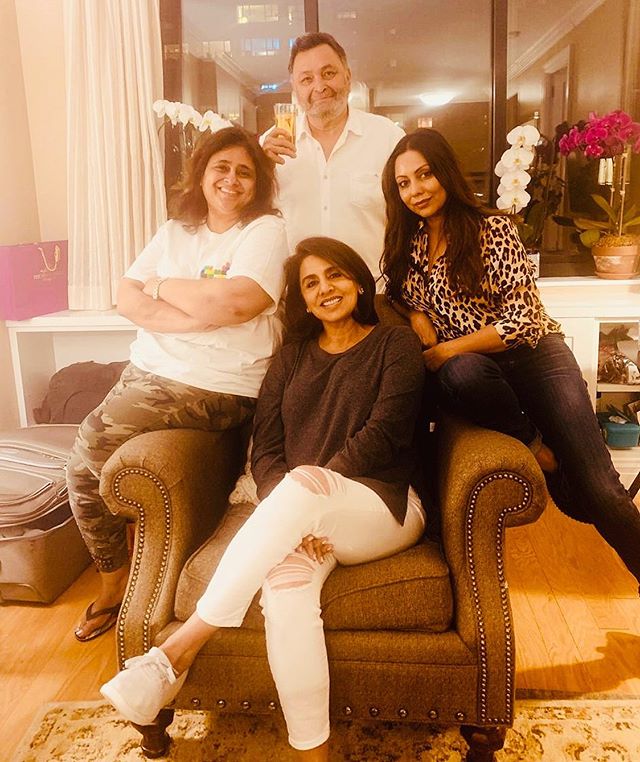 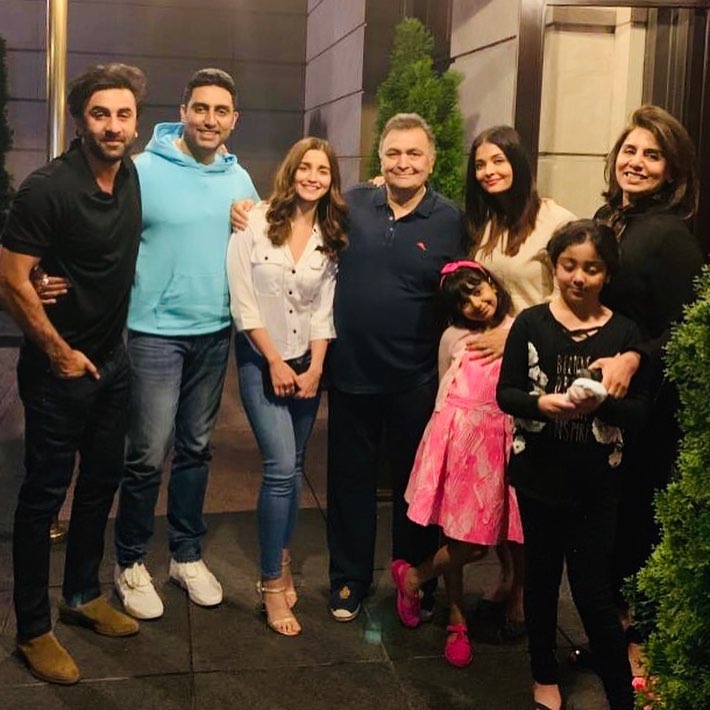 Finally, the Kapoors are on cloud nine as Rishi Kapoor returned to Mumbai with his wife, Neetu Kapoor, after 11 months of treatment in the US. Expressing his gratitude for returning home after ‘11 months and 11 days’, Rishi ji tweeted, “BACK HOME!!!!!! 11 Months 11days! Thank you all!” Rishi Kapoor and Neetu Kapoor were snapped at the airport as they made their way towards ‘home sweet home’. Dressed in a black tee and denim, Rishi ji looked all hale and hearty while Neetu ji too, complemented him well in a black top paired with a black shrug and denim. The senior Kapoors were all smiles for the cameras and radiated like a ray of sunshine at around 3 in the morning. Neetu Kapoor shared a picture of how Rishi Kapoor was welcomed at home by his kids, Ranbir Kapoor and Riddhima Kapoor Sahni. She captioned it, "This simple ballon has so much Warmth Love and belonging." 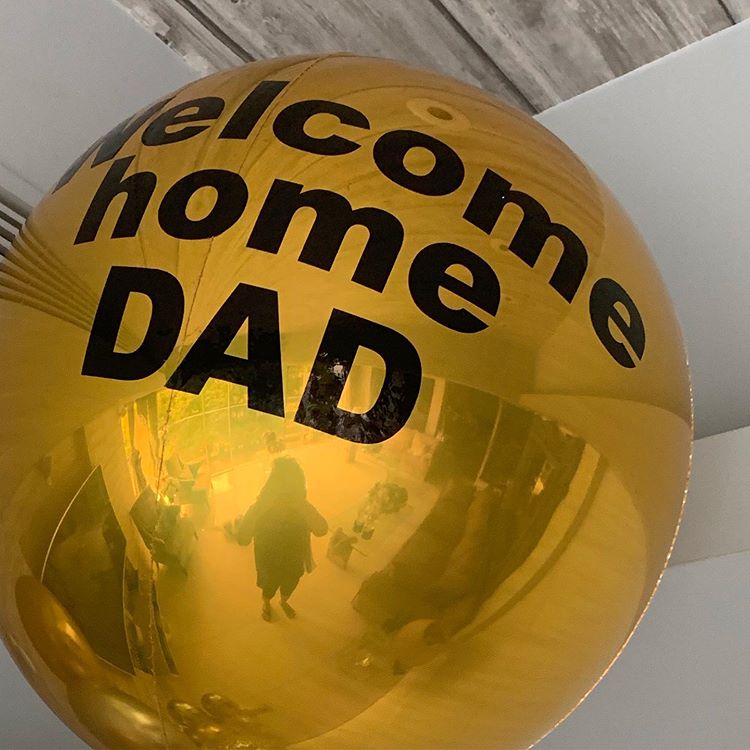 Rishi Kapoor and Neetu Kapoor’s close friend, Anupam Kher took to Twitter to bid adieu to the couple as they left for India. Sharing all-smiles pictures with them, Anupam ji tweeted, “Dearest #NeetuKapoor and @chintskap!! Here is wishing you a safe trip back to India after being in New York for almost a year. I have mixed feelings. I am happy & sad at the same time. I am going to miss you terribly. We had a great time together. Thank you. Love & prayers.” 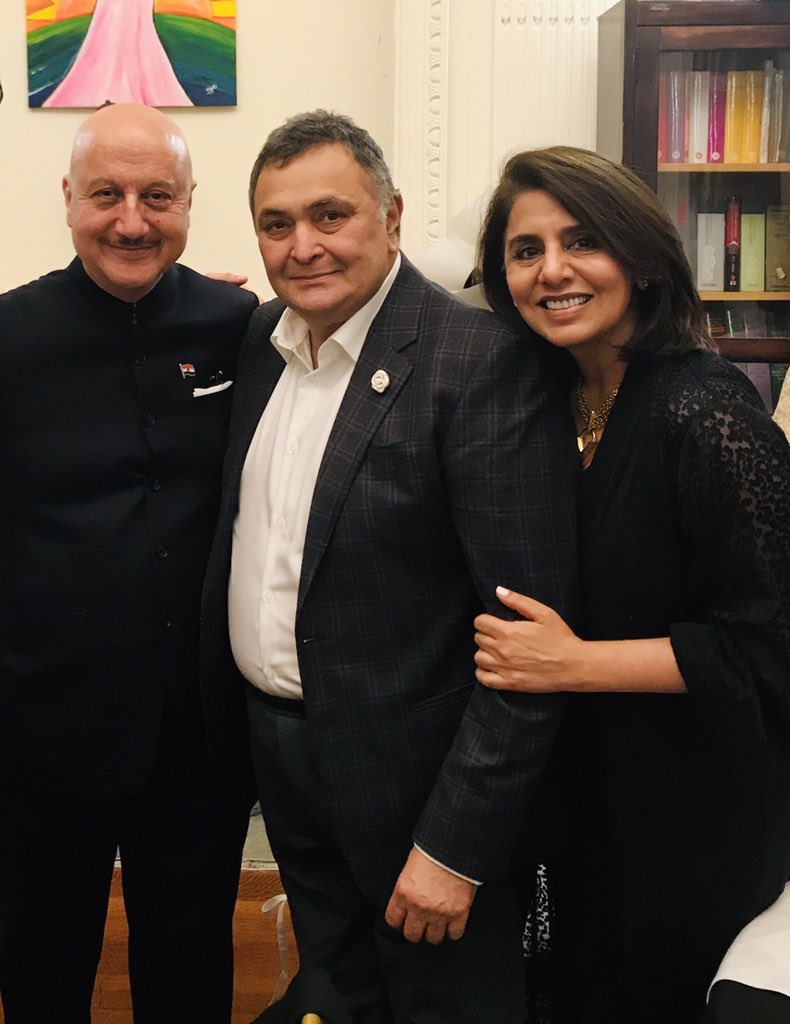 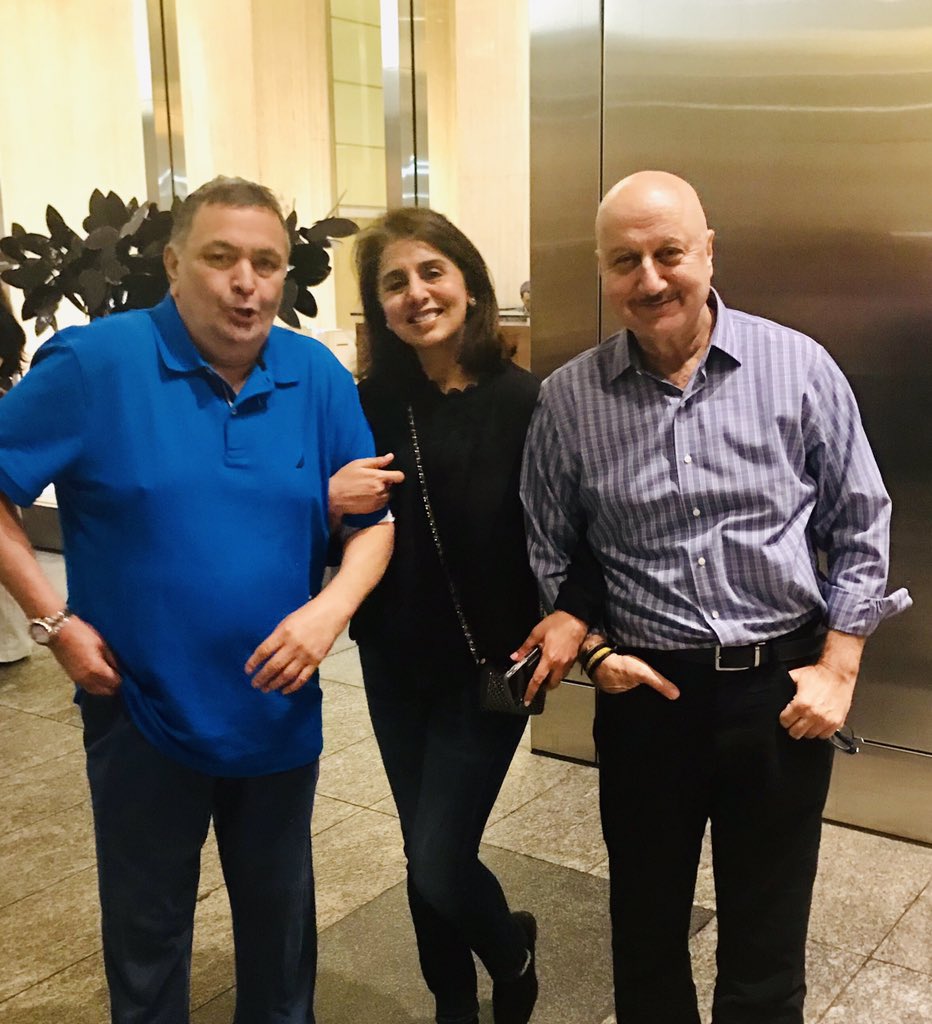 Before returning to Mumbai, Rishi Kapoor and Neetu Kapoor had paid a visit to Balaji to seek blessings from God. Neetu ji had posted a picture from their visit to the temple and a cute video wherein she attempts a tongue twister in Tamil and just like Rishi ji, we were too impressed with her accent and pronunciation. She had captioned her post as “After taking blessings of Balaji… entertaining them with a Tamil tongue twister.”

Revealing her and their kids, Ranbir Kapoor and Riddhima Kapoor Sahni’s reaction to the news of Rishi Kapoor’s diagnosis, Neetu Kapoor had shared, “My first reaction was, obviously very bad, I was devastated, my kids were devastated. We didn’t know what to do. But then we thought to ourselves that this is it, we have to deal with it. Where he (Rishi) is concerned, he was in denial. For 4-5 months, he was not himself. I think when you start accepting that this is your issue, then you are stronger. I feel he is much stronger for the past, maybe 5-6 months.” (Also Read: Huma Qureshi Makes Relationship Insta-Official With Mudassar Aziz, Pens Heartfelt Note On His B'day) How she had to become Rishi Kapoor’s mother in this tough time and trick him into eating when he didn’t feel like, Neetu Kapoor had continued, “Mujhe laga, I became his mother. Like, like he was my third child…khana, sona, dawaiyaan…jaise bacche ko look after karte hain. I just became a mother. A mother wants to do the best. There were times when Rishi did not want to eat anything at all for nine days at a go. My worry was when he didn’t eat. Around January, I think in every treatment there are days when you don’t want to eat…Then I thought what do I make to get him to eat? I used to play tricks around him, talk to the nurse about some restaurant and some good dish they have and then he would chip in saying ‘really? ok let us try that.” 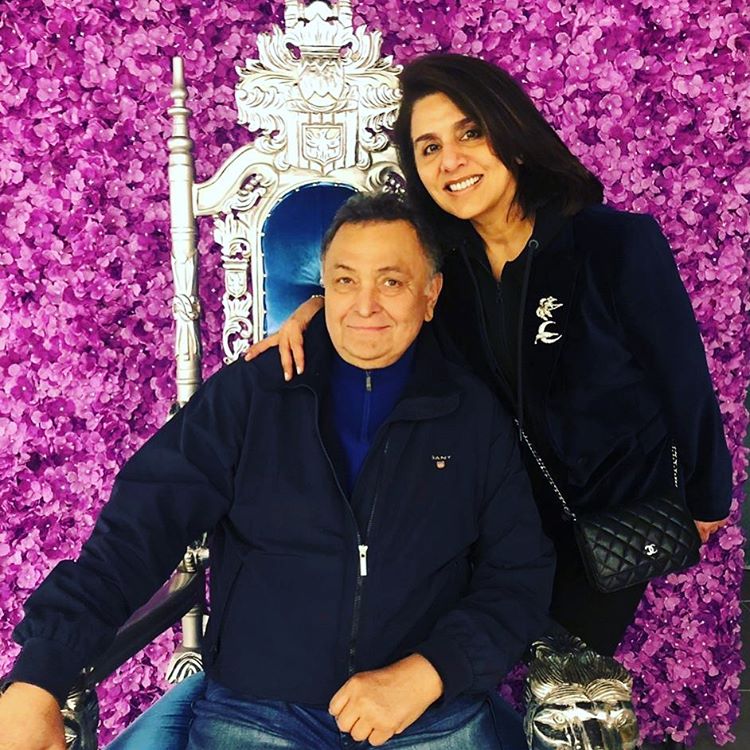 It was on October 01, 2018, when Rishi Kapoor’s mother, Krishna Raj Kapoor had breathed her last, but he along with Neetu Kapoor and Ranbir Kapoor weren’t present in India as they were off to New York for his cancer treatment. Expressing his feelings for not being present to bid a final adieu to his mother, Rishi Kapoor was quoted as saying by The Times of India, “That was very unfortunate. I left for the US on September 29, and my mother passed away on October 1. She knew that I had contracted a serious disorder. That entire period was traumatic for me. I was caught up with my problem. I didn’t know what to do, and I didn’t have an option because I had to be here in New York. My brother told me that by the time I would get back, it would be too late. Also, I didn’t have the stamina or strength to come back.” As Neetu Kapoor too, wasn’t able to attend her mother-in-law, Krishna Raj Kapoor’s last rites, she had penned down a eulogy for her ‘best friend’, sharing a lovely picture with her. Neetu ji had captioned the following picture on her Instagram as “She was such a huge influence in my life admired her elegance with generosity and warmth!!! She will always stay in my heart #noonelikeher #besthumanbieng #lovedher #bestfriend." (Also Read: Sargun Mehta Had To Convince Hubby, Ravi Dubey For A Steaming On-Screen Liplock With Nia Sharma) 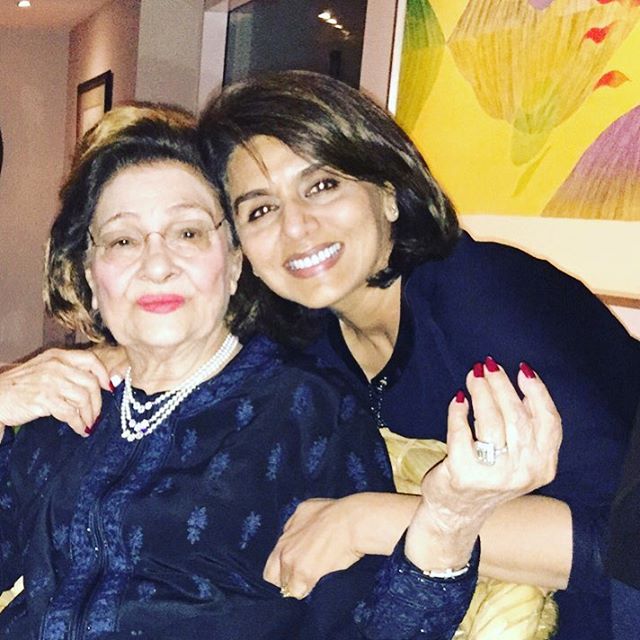 It feels so good to see Rishi Kapoor back in Mumbai, hale and hearty! 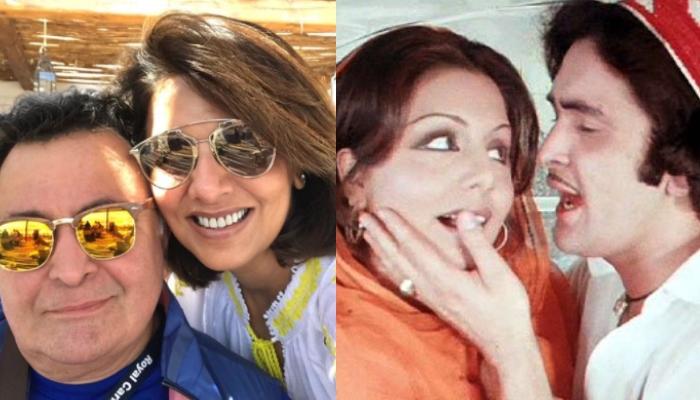 Rishi Kapoor and Neetu Kapoor had made us believe that love is the only thing required to lead a happy life. Their love story was not less than any Bollywood film and is still considered as an iconic one. When Rishi Kapoor had made his debut with the film, Bobby,