Riddhima Kapoor Sahni has shared a gem of memory, in the form of an unseen picture from the time when Rishi ji, Randir ji and all other Kapoor siblings were kids! 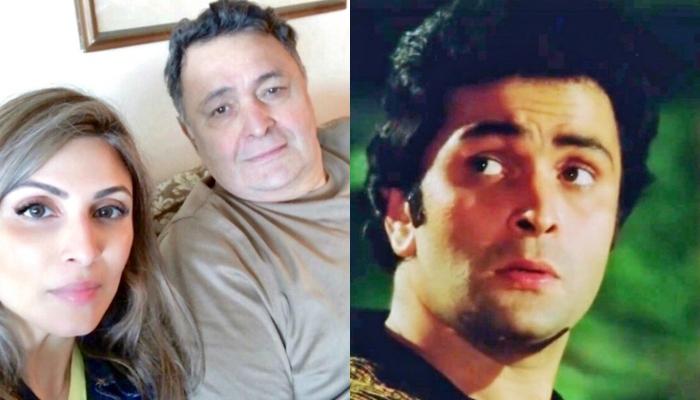 Death is inevitable, and so is pain, someone once said, 'Pain demands to be felt!' Truer words have never been spoken before. The whole nation wails at the untimely demise of legendary actors who left us this year. Irrfan Khan, Rishi Kapoor and Sushant Singh Rajput, who bid farewell to us and left us mourning, are still alive in our memories and hearts and will be forever till eternity! Rishi ji's daughter, Riddhima Sahni makes sure to keep her father's memories alive by sharing never seen before pictures from memory archives! (Recommended Read: Suresh Raina Wishes To See The World With His Wife, Priyanka Raina, In His Birthday Wish for Her)

On May 23, 2020, Riddhima Kapoor Sahni had posted a beautiful family picture on her Instagram stories as she had missed her late father, Rishi Kapoor. Just having a look at the picture and seeing that wide and bright smile on the face of Rishi Kapoor tells us about the happy phase he had enjoyed with his family. In the picture, we could also see the granddaughter of late Rishi Kapoor, Samara Sahni, who is standing beside her nani ji, Neetu Kapoor. Just like this one, Riddhima Kapoor Sahni has again shared a gem of memory, in the form of an unseen picture from the time when Rishi ji, Randhir ji and all other Kapoor siblings were kids! Scroll down to check it out. 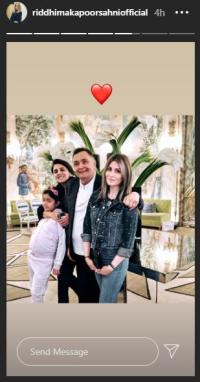 On June 18, 2020, Riddhima Kapoor Sahni took to her Instagram stories and shared an age-old unseen picture of Rishi Kapoor with his siblings, Randhir Kapoor, Ritu Kapoor, Rajiv Kapoor, and mother, Krishna Raj Kapoor. The black and white photo is an old classic from the veteran star's childhood. Riddhima Kapoor Sahni treated Rishi Kapoor fans with this throwback picture and wrote, "Classic" atop it. Check out the picture below: 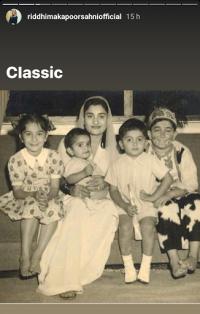 On Rishi ji's one-month death anniversary, his daughter, Riddhima Kapoor Sahni had taken to her Instagram stories to pay tribute and remember her late father. She had shared a happy family picture of herself along with her father, Rishi Kapoor, her mother, Neetu Kapoor, her husband, Bharat Sahni and her little daughter, Samara Sahni. The picture had reminded us of the good old times when happiness had prevailed around us, and we had the vicinity of our loved ones. Riddhima had also written a sweet message atop the beautiful picture, which could be read as "Say not in grief: 'He is no more' but live in thankfulness that he was- Hebrew Proverb. One month today we miss you." Take a look at the unseen picture here. (Also Read: Irrfan Khan's Son, Babil Khan Looks Exactly Like His Late Father's Younger Version, Shares The Proof) 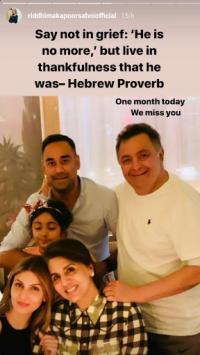 Ever since Rishi ji's demise, his daughter, Riddhima Kapoor Sahni’s Instagram handle has been all about the memories of her father. Time and again, she keeps sharing her father’s precious memories on her social media handles. Riddhima had taken to her Instagram on May 29, 2020, to share the story of her Scrabble game charades with her mother, Neetu Kapoor. Riddhima had shared how her father had trained her mother well in the game as her mother had already beaten her twice in the game. Sharing the picture of her scrabble game, she had written “Dad trained mom well!! She beat me twice already! @neetu54” atop it. (You May Also Like: Paras Chhabra Replaces Ex-Girlfriend, Akanksha Puri's Name Tattoo With Bigg Boss's Logo, Here's Why) 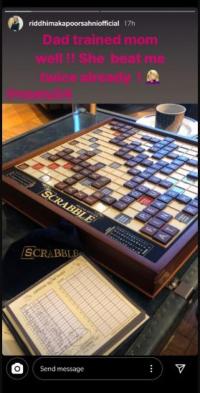 Rishi ji will live in our hearts forever!