To think that adulting changes a lot of things but silly sibling fights is true! Scroll down to know how the Kapoor siblings, Riddhima Kapoor Sahni and Ranbir Kapoor fight with each other! The chiraag of the Kapoor khandaan, Ranbir Kapoor shares a great camaraderie with his sister, Riddhima Kapoor Sahni. Did you know it was his sister, Riddhima who had approved Ranbir Kapoor's relationship with Alia Bhatt? In an interview with the Hindustan Times, Riddhima had once quoted, “I am happy if my brother is happy, and I am a very happy sister.” (Recommended Read: Mahhi Vij Pens A Thank You Note For Her Little Daughter, Tara Jay Bhanushali)

The Kapoor siblings, Riddhima Kapoor Sahni and Ranbir Kapoor are the emotional anchors of each other, and we have seen how they had stood for each other and had supported each other during difficult times. Because family is all that you have and need at the end. Like any other siblings pair, even Riddhima and Ranbir fight a lot! How do we know? Well, scroll down and you'll know too! 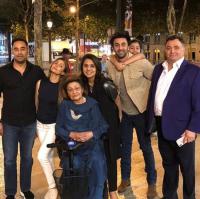 Recently Riddhima Kapoor Sahni took to her Instagram handle to engage in a fun 'Ask me anything' session and the fans had a gala time asking some fun and some personal questions. A fan asked, "How is Neetu mam? Is she doing fine? More strength to you." To which, Riddhima replied, "We derive strength from each other-we are well." Another asked, "Aapki inspiration kon hai mam? (Who is your inspiration?)" And the doting daughter, Riddhima replied, "My mother." One user also asked, "Do you have a nutritionist?" To which, Riddhima gave a hilarious reply, "My mother is my in house nutritionist." Similarly, there were a lot of questions thrown at her and she answered each one of them gracefully. One question which caught our attention was when a user asked her, "Do you and Ranbir fight each other even at this age?" To which, Riddhima replied, "All the time" followed by a laughing emoji. Check out the screengrab of the stories below: 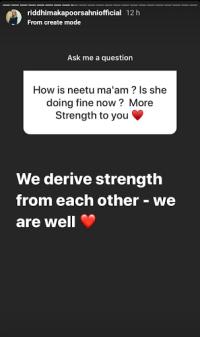 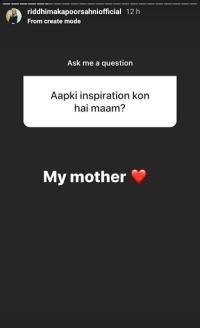 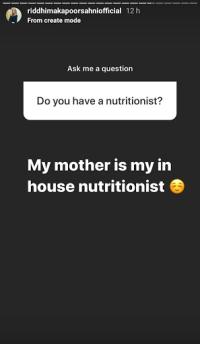 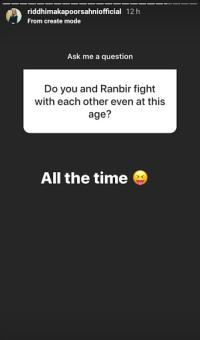 Riddhima Kapoor Sahni dotes on her family and that is pretty evident if you frisk through her social media handles. On May 7, 2020, the loving daughter had shared an adorable picture with a heart-melting note for her mother, Neetu Kapoor and her brother, Ranbir Kapoor. She had taken to her Instagram stories and had shared a throwback selfie in which Neetu Kapoor and Ranbir Kapoor were smiling for the camera. Along with the picture, she had written an emotional caption which could be read as “Got your back Ma #yourpillars” atop it. 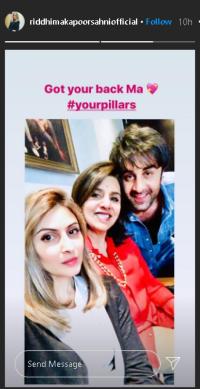 Back in the days when going out for parties, dinners and get-together were normal, Riddhima Kapoor Sahni used to share glimpses of her gala time with her family. Throwback to January this year when Riddhima had shared pictures of her brother, Ranbir Kapoor, mother, Neetu Kapoor and daughter, Samara Sahni from their fam-jam moments. In one of the pictures, Riddhima was seen posing with her brother, dressed in a black jacket, denim and cap. Ranbir had looked dapper as usual, as he had twinned in black with his sister, Riddhima. In the second picture, Neetu Kapoor and Riddhima’s daughter, Samara had joined them along with their pet pooch, Killian. Check out the pictures below. (Also Read: Neil Nitin Mukesh Reveals His Parents Miss Meeting His Daughter, Nurvi Amidst The Pandemic) 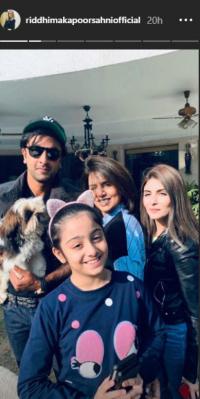 Riddhima Kapoor Sahni is the queen of family selfies, an instance of which we had seen last year on the occasion of Diwali when she had shared an adorable selfie with her mother and brother, clad in ethnic outfits. Ranbir had donned a casual look with a denim shirt, Neetu Kapoor had opted for a red kurta and Riddhima was seen in a black coloured top. The heart-melting selfie clicked by Riddhima, who had also captioned the picture as “Mine”. (You May Also Like: Govinda Celebrates His Wife, Sunita Ahuja's 50th Birthday With Family And Friends)