Riddhima Kapoor Sahni and Neetu Kapoor are the perfect examples of mother-daughter goals. On October 1, 2020, Riddhima shared a picture with Neetu ji and they looked stunning. 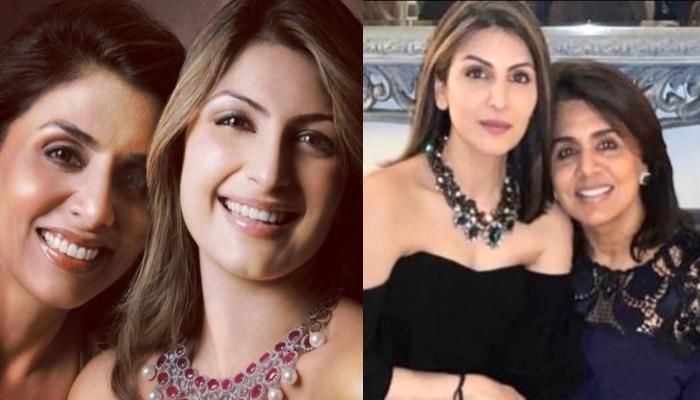 The love between a mother and her daughter knows no bounds as for a daughter, her mother is always her first best friend. From trying her lipstick, wearing her pointed heels to picking her best saree for farewell, a girl always looks up to her mother. A mother acts as a role model for her daughter and the latter not only gets the good looks but some of the best mannerisms from her mother too. From Jaya Bachchan-Shweta Bachchan Nanda to Dimple Kapadia-Twinkle Khanna, Bollywood has bestowed us with some of the best mother-daughter duos and Neetu Kapoor-Riddhima Kapoor Sahni are one of them. (Also Read: Hardik Pandya And Natasa Stankovic's Little Prince, Agastya Turns Two Months Old)

Riddhima Kapoor Sahni has always played the role of a doting daughter to her parents, Neetu Kapoor and late Rishi Kapoor. It has always been a treat to see adorable pictures of Riddhima spending quality time with her family and cousins. After the death of her father, Rishi Kapoor, Riddhima had stood like a pillar of strength for her mother, Neetu and is staying with her in Mumbai since then. From playing her dad’s favourite game, scrabble with Neetu ji to going with her on a stroll, Riddhima beautifully managed to fill in the vacuum in her mom’s life. 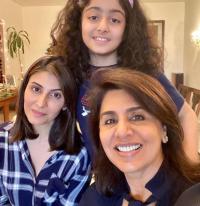 Riddhima Kapoor Sahni loves sharing glimpses of the precious time she spends with her mother, Neetu Kapoor and the recent one was no different. On October 1, 2020, Riddima took to her IG stories and shared a picture with Neetu ji as the two stepped out from a store after shopping. In the picture, Neetu ji was seen in a floral top with blue-coloured jeans. On the other hand, Riddhima donned a navy-blue-coloured top with white-coloured pants. The mother-daughter duo looked stunning and Riddhima wrote, “The new normal” atop the picture. 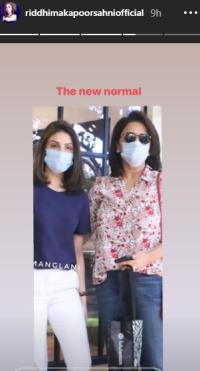 On July 8, 2020, Neetu Kapoor turned a year older and the doting daughter, Riddhima Kapoor Sahni had taken to her Instagram handle and had posted a beautiful picture with Neetu ji and Ranbir Kapoor. In the picture, Neetu ji had looked gorgeous in her black outfit, Riddhima had opted for a white dress, and Ranbir had looked dapper in his floral green t-shirt. Along with the picture-perfect selfie, Riddhima had written a heartmelting caption which could be read as "Happiest bday my Iron Lady I love you so much Ma." (Also Read: Dipika Kakar Ibrahim Shares A Hilarious Picture Of Her Hubby, Shoaib Ibrahim Forcing Her To Jog) When Riddhima had turned 40 on September 15, 2020, Neetu Kapoor had wished her angel in the most adorable manner. She had taken to her IG handle and had shared a stunning picture from Riddhima’s birthday celebrations and had written, “In my head she is my lil girl but what she has been for the past few months has been amazing!!! She has been strict at the same time always watched me like a hawk !! we have cried we have laughed played scrabble (most of the time she lost) cannot be another like her, happy big 40 cuteness.” 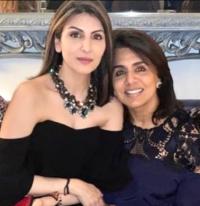 There are a lot of moments when Riddhima Kapoor Sahni had supported her mother, and the duo together had given us major mother-daughter goals. On June 3, 2020, Riddhima Kapoor had taken to her Instagram handle and had posted a picture of herself with her mother, Neetu Kapoor. The Kapoor ladies could be seen twinning in white and black checkered shirts, looking chic and elegant as ever. Riddhima had put a sweet caption on the picture which could be read as "Just us #twinningwithmommy #strongertogether." (Also Read: Dilip Kumar Shares A Mesmerising Picture With Wife, Saira Banu In His 'Favourite Pink' Shirt) Aren’t Riddhima and Neetu ji looking stunning? What do you think? Let us know. Life is quite strange as no one can predict what is going to happen the next moment. And that is the reason why some people believe in living life to the fullest as the memories we create with our loved ones are the only things to cherish in a lifetime.