Richa Chadha posted a goofy video with her beau, Ali Fazal with a quirky note alongside it, giving an insight as to what kind of partner you should look for! Met on the sets of Fukrey, Richa Chadha and Ali Fazal had fallen for each other. The million-dollar question is, what do you think had struck the spark between them? Well, Richa Chadha has given a hint on how has their relationship always been full of energy and enthusiasm, even after a long time of courtship. Scroll down to find out! (Recommended Read: Hardik Pandya's Elder Brother Krunal Is Busy Doing 'Tauji' Duties 'Talks Cricket' With Junior Hardik)

In an interaction with the Mumbai Mirror, Ali Fazal had talked about his wedding plans getting postponed, and had given a plausible time for his wedding. He had said, "Let's see when we are able to accept the new normal, then, we will decide on a date, maybe early next year." While his ladylove Richa Chadha had expressed that it is only pragmatic to push the wedding to the coming year in the interest of everyone, who would wish to attend. 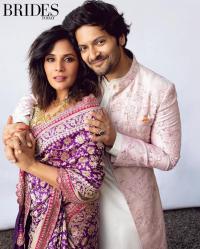 On August 7, 2020, Richa Chadha took to her IG handle and posted a goofy video with her beau, Ali Fazal with a quirky note alongside it, giving an insight as to what kind of partner you should look for. Ladies, pay attention! She wrote, "Be with someone who can crack a joke with the back of your head. @alifazal9. #couple #missing #gadha #richachadha #actorslife #lockdown #2020sucks."

Some time ago, Ali Fazal and Richa Chadha had planned a getaway to the beach. Sharing the glimpses of their outing, Ali had given Alice In Wonderland reference in the caption, which could be read as "@thdrichachadha Remember i told you i will bring Alice here..." Richa had an apt comment on his post, which could be read as "All we have to do, is call Cheshire Cat and leave a note for Alice. She's enjoying the wonderland" (Also Read: Before Naga Chaitanya's Wedding With Samantha Akkineni, His Dad, Nagarjuna Gave Him This Cool Advice) 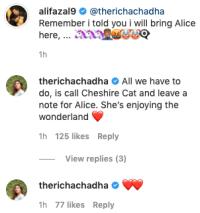 Earlier, in an interview with Brides Today magazine, Richa Chadha had told the sweetest story of how she had confessed her love to her beau, Ali Fazal. She had admitted that it had taken Ali almost three months to say 'I Love you' back to her! She had said, "We were at my house watching Chaplin, the 1992 British-American biographical comedy-drama film starring Robert Downey Jr. I was happy to see him enjoy the movie and was grateful to have found someone with similar tastes. That is when I said, "This is really sweet, I love you." to him. took him three months to say I love you back to me." 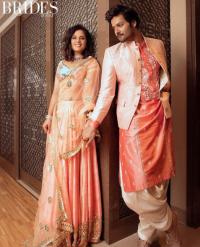 The lovebirds were featured on the cover of the July issue of Brides Today magazine and had shared snippets of their love story. Richa had written a letter to her bae, wondering how it was a miracle that she had found someone with whom she can discuss literature, cinema, poetry, food and music. Excerpts of which could be read as "So weird to write to you a letter when I can just call you…seems apt in view of this 21 days lockdown though. May we both emerge from this like butterflies from a cocoon. I keep saying it's a miracle we met, because what are the odds? What are the odds of finding someone with whom you can discuss literature, cinema, poetry, food, music…? Someone who enjoys going on a run in the sultry LA afternoon and bargaining with peddlers at Chor Bazaar! You, my love, are the last of the Mohicans, as the cultured man ambles to his extinction, I am so glad I found you. Found you with your intact spine and balls of steel!" (Don't Miss: Rana Daggubati And Miheeka Bajaj Tapped On The Beats Of Dhol On Their Haldi Ceremony [Video Inside])

Do you agree with what Richa has said?