Krunal Pandya shared a cute video on his IG handle holding junior Hardik and indulged in what seems to be a serious discussion with him and we're as intrigued to know as you are!

Cricket is a religion in India and cricket fanatics' happiness knows no bounds whenever a popular cricketer's offspring arrives, for he is bound to be a cricketer only, in their eyes. Well, what can we say, people have different ways to show their love and admiration. And, speaking for cricket fans, this is how they show their love. Probably that's why the whole nation was blissed out on July 30, 2020, when Hardik Pandya had informed his fans that he and his wife, Natasa Stankovic, had welcomed their little bundle of joy. (Recommended Read: Shoaib Ibrahim Sang 'Maine Pucha Chaand Se' For Wife, Dipika Kakar On Her Birthday [Video Inside])

Hardik Pandya's elder brother, Krunal Pandya, the elated tauji had also expressed his happiness on the arrival of 'junior Hardik' by sharing a picture holding the little bundle of joy on his IG handle. He had written a sweet note alongside it congratulating his brother, Hardik Pandya. His caption could be read as "Happiness which words can't express! I'm a bade papa now to this beautiful baby boy. Congratulations bhai and Nats. Bade papa loves you, little one."

Natasa Stankovic Is Missing Her Hubby, Hardik Pandya, Shares A Throwback Pool Selfie With Him 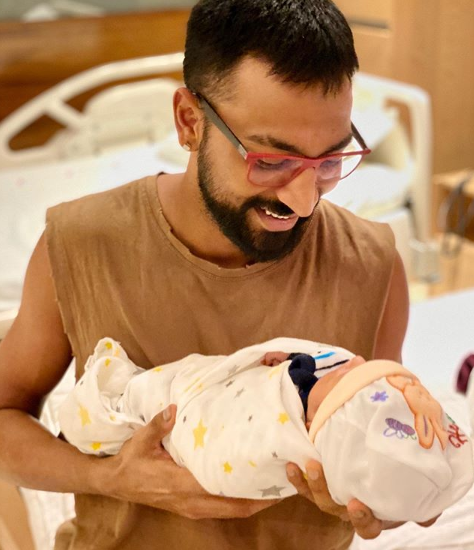 Krunal Pandya shared a cute boomerang video on his IG handle on August 6, 2020, holding junior Hardik and indulged in what seems to be a serious discussion with him. We're only guessing he must be teaching him some tricks of the game. Krunal also put quirky caption alongside the video which confirmed our suspicion. The caption read, "Let's talk cricket." On the adorable video, Hardik Pandya's best friend, KL Rahul, commented, "Please tell him to become a fast bowling all rounder." Check out the video below:

Natasa and Hardik's little one was given a grand welcome at home, when the happy family had returned from the hospital. Hardik had taken to his IG stories to share pictures of the decoration done for the welcome of junior Hardik. In the picture, we could see balloons in the shades of blue, a blue coloured cake, foil-alphabet balloons that could be read as 'BOY', and a beautiful cot, decorated with white net. Sharing the picture, Hardik had written, "My boys welcome. Thank you, @paankhuriisharma. @shaniamistry28 thank you for the lovely decor and the cake @takoliciousplatter" atop it. It was the cake picture shared by the Takolicious official that had revealed the name of the baby as it had written over it "Welcome Nats & Agastya". 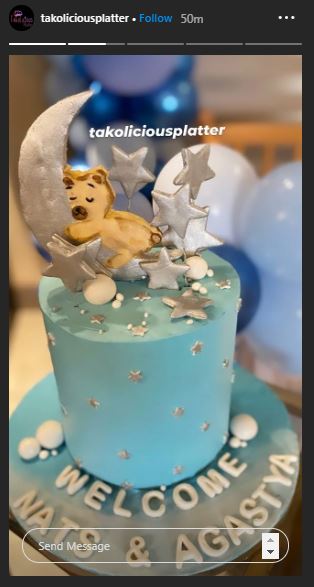 Hardik had also thanked the hospital where his wife had delivered the baby with a series of pictures. He had expressed his gratitude towards them for bringing his child into this world and making them feel like they are at home. Sharing the pictures, Hardik had written, "Special thanks to Akansha hospital in Anand! Last one week you guys made sure we have our home away from home! @niketunited @drmolinapatel @dr.narayanpatel you guys are absolute gems. Bringing my baby in this world! Will be grateful forever." (Also Read: Abhinav Kohli Shares A Picture With Son, Reyansh Kohli, Accuses Shweta Tiwari Of Separating Them) 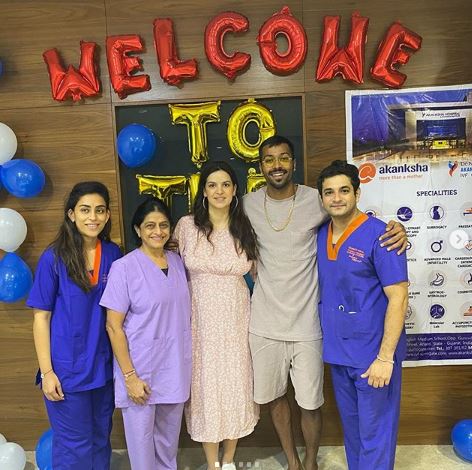 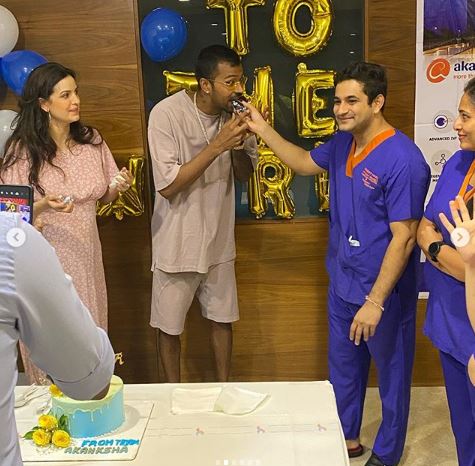 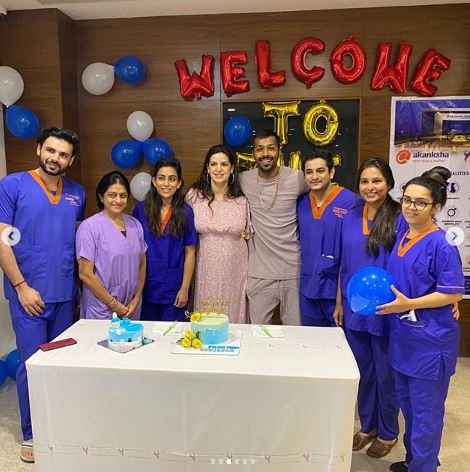 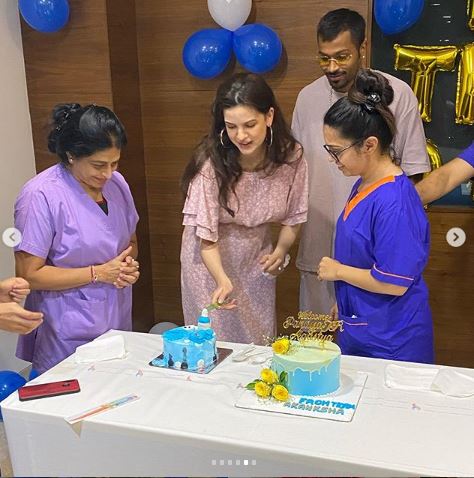 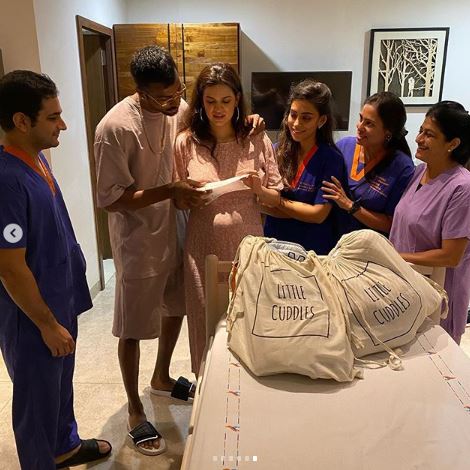 The elated mommy, Natasa also hadn't disappointed her fans as and had posted the first family picture on her social media feed. Holding a bouquet of roses in her hand given to her by Hardik and the doting daddy holding their little one in his arms, Natasa had written, "My family. My world @hardikpandya93 #blessed #grateful #myboys." 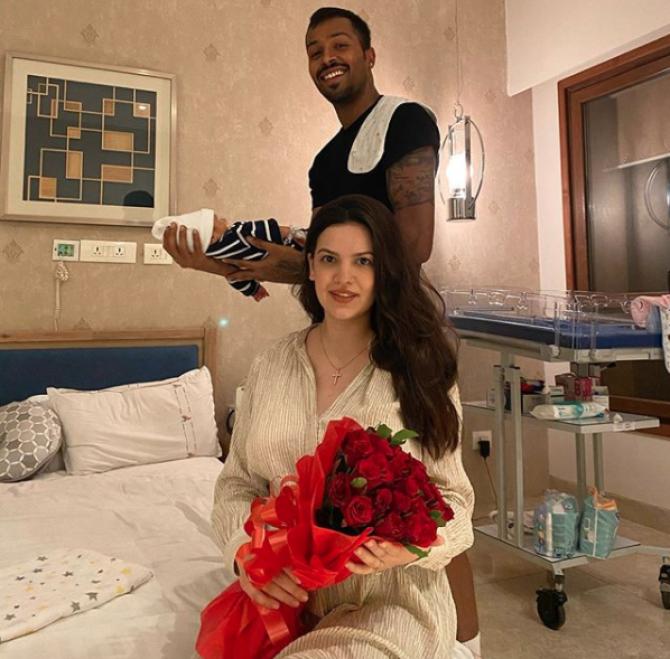 Hardik had shared the first glimpse of the little one on July 30, 2020, with a note that could be read as "We are blessed with our baby boy." and had later posted the first-ever picture of his newborn baby boy, holding him in his arms, from the hospital with the caption, "The blessing from God @natasastankovic__" The daddy duties have also begun for Hardik, and he had given the proof of the same on his IG stories. (Don't Miss: Sunny Leone Takes Her Kids, Nisha, Noah, And Asher To Fire House To Teach Them Fire Safety [Videos])

Do you also 'talk cricket' to your baby 'nieces/nephews?