Richa Chadha and Kalki Koechlin share a concrete bond and is the reason why Richa posted the sweetest congratulatory message for Kalki on the birth of her daughter, Sappho. Bollywood actress, Kalki Koechlin is one of the few people in this world who dare to speak what they feel instead of letting the gossipmongers doing them their job. She has been on a professional rise with her experimental performances in different genres and speaking her heart out on sensitive issues. Currently, the actress is in a happy phase of her life as she is in love with a classical pianist, Guy Hershberg from Jerusalem, Israel. On February 7, 2020, Kalki Koechlin and her beau, Guy Hershberg became proud parents of a baby girl. (Recommended Read: Sania Mirza's Baby Boy Izhaan Mirza Malik Is A 'Grand Master' As He Plays Chess Early In The Morning)

On February 9, 2020, Kalki had taken to her Instagram handle and shared the footprints of her baby girl. Along with it, she had written, "Please welcome Sappho. Born in 07/02/20. She just spent 9 months wrapped up like a momo in my uterus. Let's give her some space. Thank you for all the good wishes and positive energy pouring in. And respect to all the women who go through the intense and gruesome experience of birth, be it vaginal or c section, so many of whom are not given credit or support for the biggest challenges they face, but are expected to do it out of some kind of duty. The process takes a huge toll both psychological and physical and should have the backing of an entire community to truly heal. And a reminder to every human being of where we started, being formed from tiny molecules to conscious, beautiful beings. We are survivors of the biggest battle, the one for life and existence, and should treat ourselves and others with that love and respect. "Some say an army of horsemen or infantry, A fleet of ships is the fairest thing on the black earth, but I say It's what one loves." ~Sappho~ circa 600BC."

Since then, we have seen a lot of posts on Kalki’s Instagram handle describing the emotions she is going through. Also, she has been receiving tonnes of congratulatory messages from celebrities on the birth of her baby girl, Sappho. On February 12, 2020, Richa Chadha is the celebrity, who poured her heart out in words along with a cute picture of her with Kalki through her Instagram handle congratulating her on the birth of her baby girl, Sappho. Richa’s long caption can be read as “Congratulations @kalkikanmani I remember a conversation a few years ago, when you said, “if all the compassionate and intelligent people choose to stop having kids, what will happen to the world?” I love you and I am so happy for you and Guy! God bless you.” Have a look at the post down below and Kalki’s reply on it too. (Don't Miss: Sana Khaan's Shocking Revelation, Caught Boyfriend Melvin Louis Cheating On Her, Confirms Breakup)

When Kalki appeared on Kareena Kapoor Khan's radio show, What Women Want, she had talked about how her family reacted on her pregnancy before tying the knot. The actress had shared that her family is quite unconventional in terms of it. They are not too traditional in the sense of having to be married and all of that. She had also revealed her mother’s reaction, ‘Look, next time you marry, just make sure it’s for life.’ So she wasn’t in a big hurry.” This isn’t the first time when Kalki had talked about her views on pregnancy and wedlock. Earlier, in an interview with the Mumbai Mirror, Kalki had addressed the issue of having a child out of wedlock and had said, "What is this term ‘out of wedlock’? It belongs in a Shakespearean drama and not in a millennial world. Marriage can be useful for bureaucracy, but it is not a sign of love. Only time and consistency tell of a strong relationship." Well, we are extremely happy that Kalki has finally found happiness and peace in her life. (Also Read: Aadar Jain's Mom, Rima Jain Puts A Stamp Of Approval On His Rumoured Relationship With Tara Sutaria) 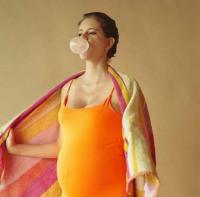 We bless Kalki’s baby girl, Sappho with all the happiness and health in the world.