Rumours and speculations about Sana Khan and celebrity choreographer, Melvin Louis have been doing rounds. In an interview, Sana reveals details of her relationship status.

In today’s world, it seems, finding a true partner and sustaining a relationship has become an extremely difficult thing.  How easily people call off their relationship by stating, ‘I don’t think it’s working out’ and move on with their lives. However, when a relationship takes a toll on someone, there is no harm in walking out of it. Well, it seems, actress Sana Khaan and her choreographer boyfriend, Melvin Louis have taken a stand on their relationship. (Also Read: Angad Bedi Trolls His Wife, Neha Dhupia For Not Knowing Which Injured Knee He's Getting Operated On)

On February 14, 2019, Valentine’s Day, Sana Khaan had taken all her fans by surprise when she had taken to her Instagram handle and had posted a dreamy picture with celebrity choreographer, Melvin Louis. One look at their love-filled picture was proof enough to know that they were madly in love with each other. The duo had twinned in shades of red and was seen sharing a happy moment with each other, smiling their hearts out. Everything was going pretty smooth when the reports of a possible crack in their relationship started surfacing the internet.

Sana Khaan's Boyfriend, Melvin Louis' Birthday Gift For Her Made Her All Emotional, Shares A Video 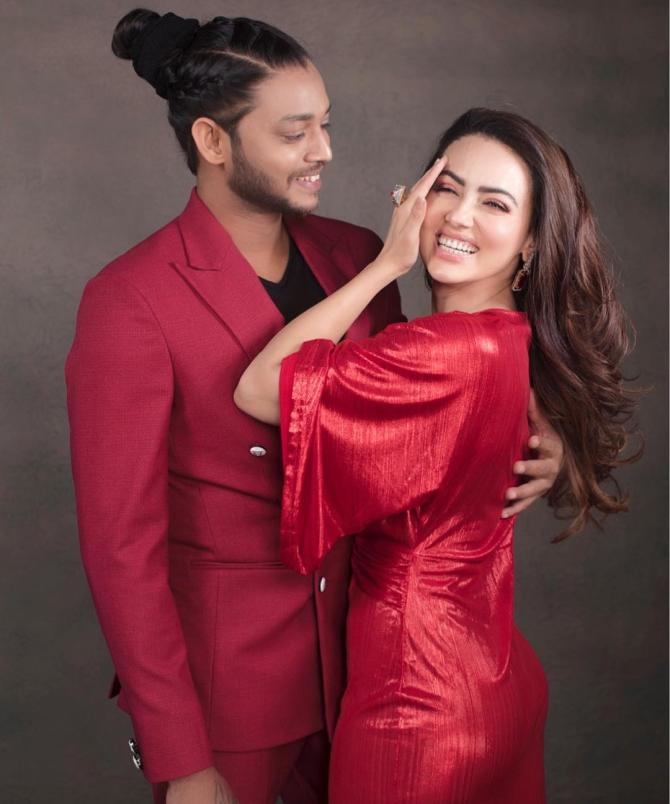 On February 12, 2020, Sana Khaan took to her Instagram handle and shared details about her breakup with Melvin Louis calling her relationship toxic. She wrote, "This is my first and it has taken a lot of courage from me to come out and speak the truth. Coz there were so many people who believed in this relation and showed so much love and respect but unfortunately, I didn’t get it from where I should have gotten. This man is dirt and he is disgusting unfortunately it took me a year to find out coz I believed in him blindly. I have taken a stand for myself coz if I won’t no one will. He is a compulsive cheater and a compulsive liar and this is his regular thing to do with everyone for his fame and popularity. This is the original content with no fabrication but be ready for the covers on this Ps: cheated on me with multiple girls since May/June which I lately discovered but there is one girl thought shocked me the most and I know her #shameonyou miss **** I will definitely tell the world your name so at least others know you before they collaborate with you. Upbringing matters a lot. He wanted to marry me and have babies what would he teach my son and daughter??? #toxicrelationship #cheappeople.” There have been rumours and speculations about Sana Khaan and Melvin Louis’ breakup but none of them confirmed anything. In an interview with The Times Of India, Sana opened up about her alleged breakup with Melvin and cited cheating as a reason for the same. She said, “I broke up with Melvin because he was cheating on me. I had loved him with all my heart and was committed to him. What I got in return has disturbed and shaken me. I have developed anxiety issues and am dealing with depression ever since.” She further stated, “A few days ago, I felt that he was up to something. Since I had my doubts, I took his mobile phone, which he snatched back from me and started deleting messages. That’s when I realised that whatever people told me about him was true, and I ended the relationship. In fact, I have come to know that he has already moved on with somebody else. I know who the girl is, but it’s not right on my part to reveal her name.” (Also Read: Bigg Boss 13 contestant, Asim Riaz Accuses Shehnaaz Gill Of Using Sidharth Shukla Only For Fame) A report by India Forums had claimed that Sana had unfollowed Melvin on Instagram. The report had also stated that Sana had also deleted Melvin's pictures and their couple pictures from her Instagram profile. A Pinkvilla report later had it that Sana has refuted all the rumours of their split and said that they are so in a relationship! Further stating the reasons behind the ‘unfollow’ and ‘deletion of pictures’, Sana had revealed that it was due to some technical glitch and also a change of phone. According to SpotboyE report, the duo had started to keep one-hand-distance from each other. Though there were no official confirmation from either Sana Khaan or Melvin Louis, the report had stated that their split has resulted in professional gaps between them. For the uninitiated, Sana and Melvin had together invested in Street Ball League, a basketball tournament. Amongst all the eight prevalent teams, Melvin is the owner of Hotsteppers and his ladylove, Sana is the ambassador of Face Spartans. (Also Read: Sunny Leone And Daniel Weber Post Adorable Wishes For Twins, Asher And Noah On Their 2nd Birthday) Well, we are really sad to hear the news and wish Sana all the strength to deal with this difficult situation.