Rhea Kapoor and Karan Boolani's rented flat in Mumbai is simple, elegant yet stylish. It gives a perfect glimpse of the 'labour' Rhea had put in to make it her dream home.

Daughter of Anil Kapoor and Sunita Kapoor, Rhea Kapoor is one of the most powerful women of the glamour world. Proud owner of the fashion label, Rheson, which she co-owns with her sister, Sonam Kapoor, Rhea Kapoor had begun her career as a film producer with Rajshree Ojha's film, Aisha. The stunning designer had also produced films like Khoobsurat and Veere Di Wedding. Rhea had donned the cap of a businesswoman with her ice cream brand, Papacream.

Rhea had surprised everyone when she had decided to marry her long-time beau, Karan Boolani in an intimate ceremony. Rhea and Karan had been dating each other for 13 years and had tied the knot on August 16, 2021, at her dad, Anil Kapoor's bungalow in Juhu, in the presence of her close friends and family.

Rhea Kapoor Shares Liplock Picture From Date Night With Her Husband, Karan Boolani On His Birthday 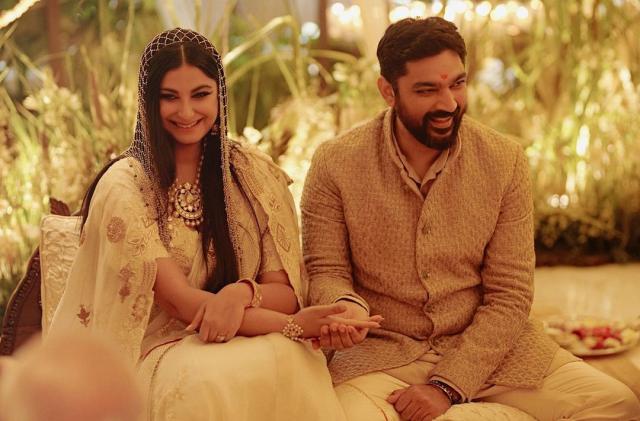 Rhea and Karan are living their happy life in a cosy 1800 square feet home in Bandra. She recently gave a tour of her house to Vogue India and it is nothing but a mix of traditional and contemporary. The couple credits their fur babies, Russell and Lemon, for making them better partners. Let's take a walk through their humble nest. 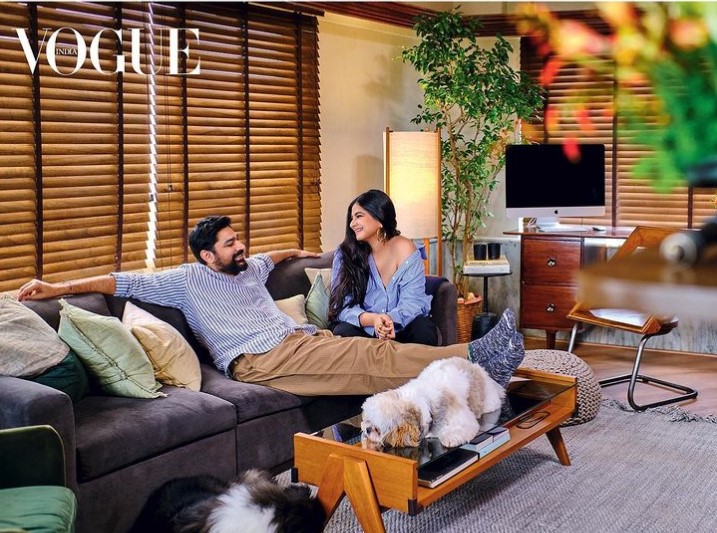 Conceptualised by Rhea herself and designed with the help of her designer-friend, Ravi Vazirani, Rhea had turned Karan's two-floored apartment into their beautiful abode. Rather than keeping the interior glittery and floral, she kept the ombre soft and graphic, with a neutral colour palette, which gives the house a young and fresh vibe. 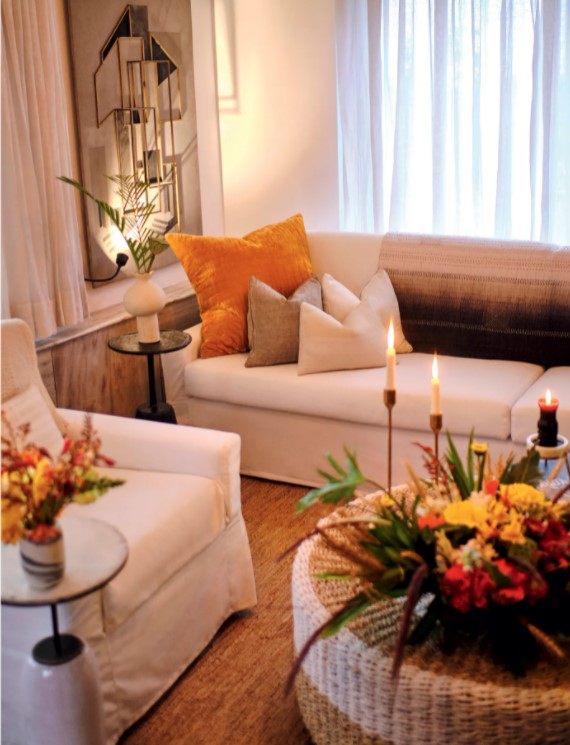 The living area of the house features brown blinds on the windows with a grey-coloured couch placed in front of it. On the wooden flooring, a grey rug complements the grey-coloured sofa. Atop the rug, sits a mid-century coffee table with a glass top and wooden base. In the living room, there is a work desk with a large iMac monitor placed on it. Next to the iMac, a large plant and a beautiful lamp are placed, giving the entire room an earthy touch. 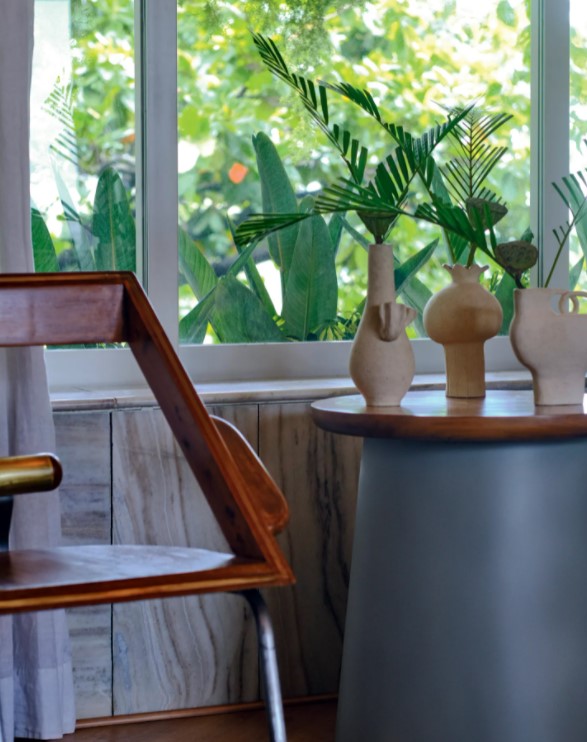 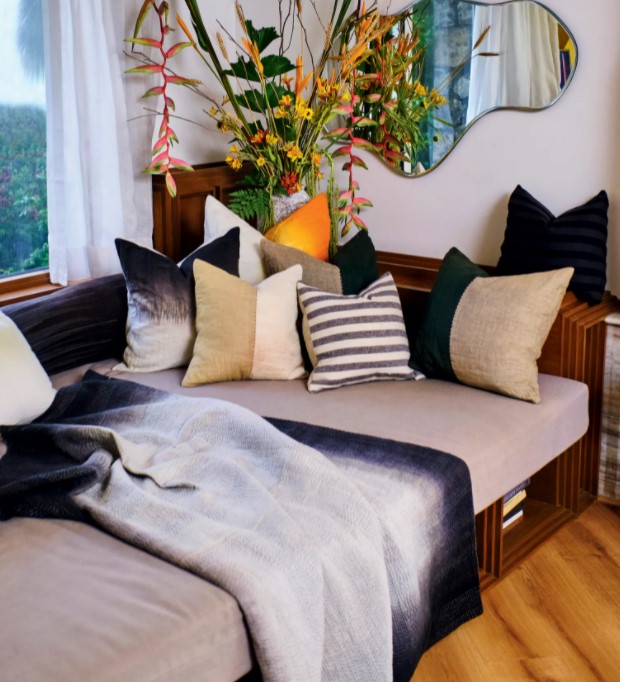 The living room also features comfortable couches in pristine white colour. The space also has a day bed, decked with cushions, upholstery, throws and bolsters designed by Anavila Misra. It is Rhea's favourite place in the whole house, where she and Karan unwind themselves after a long day. Talking about the place, Rhea shared:

"After the end of a long day, Karan and I grab a drink and unwind here. The music plays, the candles are lit, and we can just be. It’s ceremonial for us." 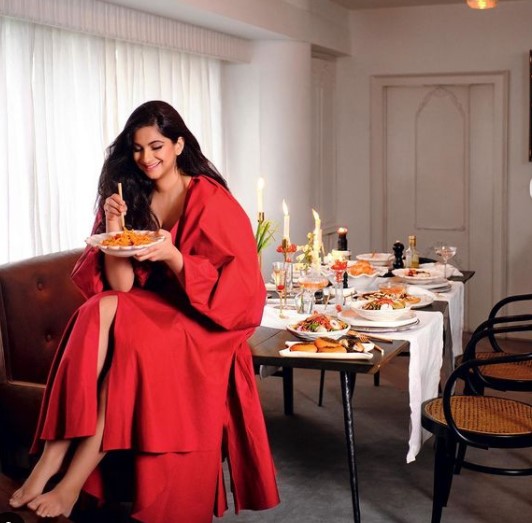 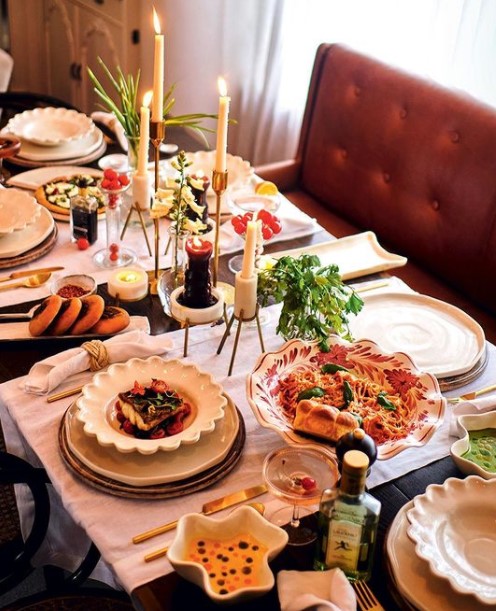 The dining room of Karan and Rhea's home boasts a large table that has a sitting capacity of six people. On one side of the dinning table, there are cane and wood chairs and on the other side sits a wooden bench, the top of which has tan leather. Speaking about her love for cooking, Rhea revealed to the magazine what advice she got from her father:

"My father asked me for only one thing when I left the Juhu bungalow: ‘Don’t spend all your time in the kitchen!’ Dad wants me to be like Jerry Bruckheimer, the world’s best producer, but we are a multifaceted generation… We can be everything." 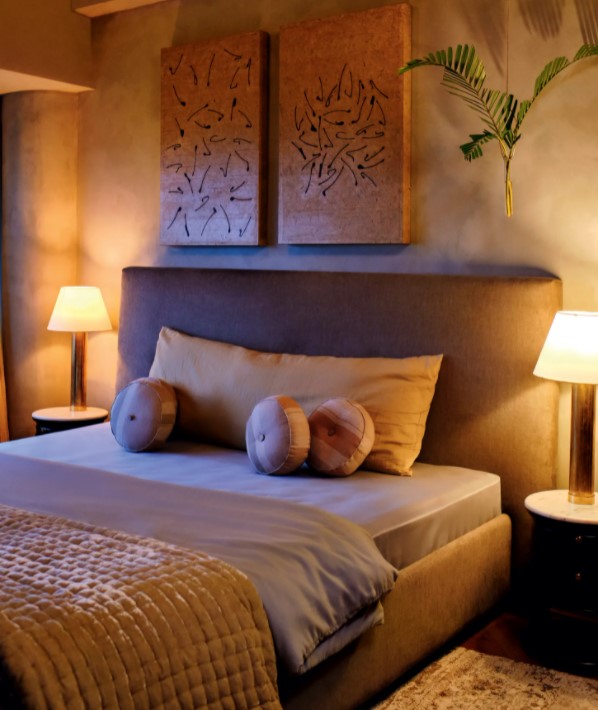 Rhea and Karan's bedroom exudes cosy vibes. The walls of the room are greyish, which perfectly complement their grey bed. Besides the bed, there are two side tables with marble tops, atop which sit matching lamps. Atop the headrest of the bed, there is an arrangement of some palm leaves, which hangs from the ceiling. 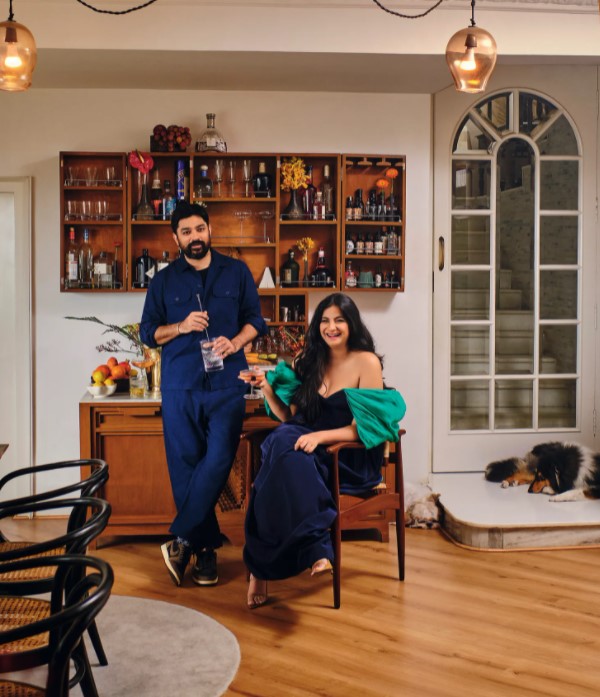 Although Rhea had conceptualised the entire design of her home, the one thing Karan insisted on, was a wood and marble bar and a library, as he loves reading. The open bar boasts some of the most expensive brands and in front of it, stands a wooden table with a marble top.

Rhea carved out a space for herself which she loves calling her den, adjacent to the upstairs bedroom. She uses the space for official meetings and to chill out with her friends. She has also taken the third floor to utilise it as her home office. 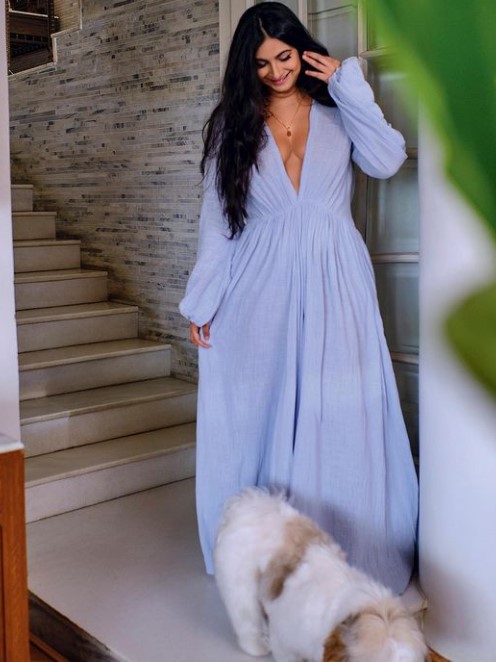 The refurbished floors of the house and the pastel shades give a soothing feeling. With exclusive antiques and some of the clusters like the wooden candlesticks and terracotta vase taken from her mom, Sunita Kapoor, Rhea has given an uncluttered aesthetic touch to her home.

Also Read: Shikhar Dhawan's Luxurious Home Has A Walk-In Closet And Designated Corners For His Awards Rhea and Karan's home was designed during the pandemic. The most hectic thing was to sanitise each and every object before bringing it to the home. The pace was quite slow as only one room could be painted at one time and the whole process of painting one single room took six days. Since factories were closed, manufacturing too took a lot of time. The entire house was planned and styled via WhatsApp. There was another dilemma faced by Rhea as the place was a rented property, it was difficult to change some details of it. The entire house is done in earthen tones so that it does not interfere or mix up with her art collection. Apart from everything, Rhea and Karan's home is a place full of good food, loud laughter and everything wonderful. 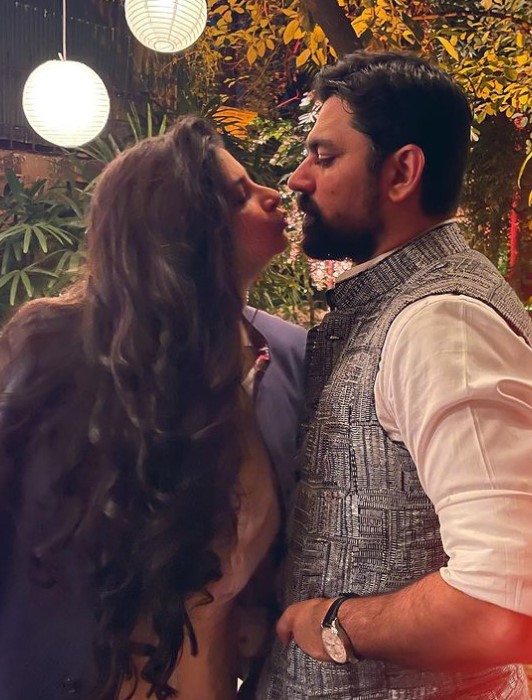 With exclusive paintings, family photos, heirlooms, extravagant vignettes, Rhea Kapoor and Karan Boolani's home speaks about the happy vibe of the people, who reside in it. Bollywood stylist and producer, Rhea Kapoor is enjoying her happily ever after with the love of her life, Karan Boolani. The duo left us in awe with their intimate wedding at the Kapoor residence in August 2021. The newly-married couple is all set to move into their new home to