Fashion designer, Tarun Tahiliani is known worldwide for his unique fashion sense. His sprawling home is a proof of his ethnic taste and king-size life.

Ace fashion designer, Tarun Tahiliani is renowned for his accomplishments in fashion, but some people don’t know the fact that he is also a perfectionist when it comes to interior designs. Being the premier creator of couture, and designer of interiors, he enjoys a larger-than-life image. From building projects to fabrics, and everything in between, Tarun has a soft spot for fine workmanship. Moreover, expansiveness and generosity of spirit excite him and his lavish lifestyle and his sprawling house is proof of the same.

Tarun Tahiliani’s lavish abode has a fan-shaped swimming pool surrounded by royal palms, and a tropical garden full of flowering frangipani and urns of tiger grass. The interiors of his house boast 13-foot-high ceilings and a central corridor that showcases a medley of antiquities and his family memorabilia. So, without further ado, let us take you on a grand tour of Tarun Tahiliani's sprawling house. 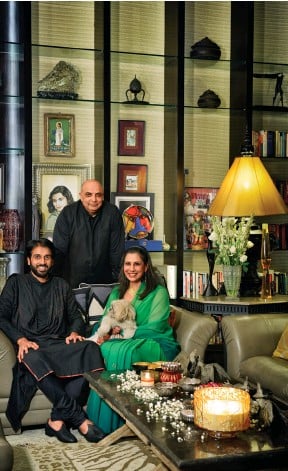 The designer, Tarun Tahiliani’s New Delhi home has grandeur and yet there is a touch of simplicity in its elements. It reflects his passion for antiques, art and his lavish lifestyle. The 54-year-old designer lives with his wife Sailaja (known as Sal), two sons in their late twenties, and their three shih-tzus. Spread across 7,000-square-foot of area, their elegant house has a blend of modern and colonial furniture. Despite his high style, Tarun Tahiliani prefers a back-to-basics living which is shaped by his background and upbringing. His mother, Jaswanti, who had died when he was just 17-year-old, was a popular social figure in Mumbai. On the other hand, his father, R.H. Tahiliani, was a penniless refugee from post-Partition Sind, who had later become an admired Chief of the Naval Staff. Their bond and down-to-earth lifestyle still remain an abiding influence on their son, Tarun Tahiliani. Initially, Tarun had tried to sell oilfield equipment, however, it was a brief stint. Later, in 1986, Tarun had set up a fashion outlet, Ensemble, with his wife, Sal, and sister, Tina, on an old family property in south Mumbai. To learn the nitty-gritty of pattern-making and draping fabrics, Tarun had then returned to New York for a year-long training at the Fashion Institute of Technology. In a conversation with Architecture Digest, Tarun had talked about the condition of the property when he had bought it in the 1990s. Sharing the details, he had said:

“I bought the triangular acre cheap as one half of a plot, with a close school friend. It was a barren land with one, sad acacia tree. It took ages to excavate the tonnes of earth to lay the foundations, and the prospects looked bleak.” The spacious drawing room in Tarun’s house features multiple seating areas and a collection of art objects and exquisite furniture. The sofas are from Bloomingdale’s with customised cushions and embroidered sheer blinds, made by Tahiliani himself. Moreover, the cornucopia-shaped brass water basin by Vikram Goyal and a prized collection of bidriware hookah bases on the centre table, add an oomph factor to the overall interior of the place. However, the most attractive furniture is the family heirloom -- the rosewood chair with a beautifully carved backrest. 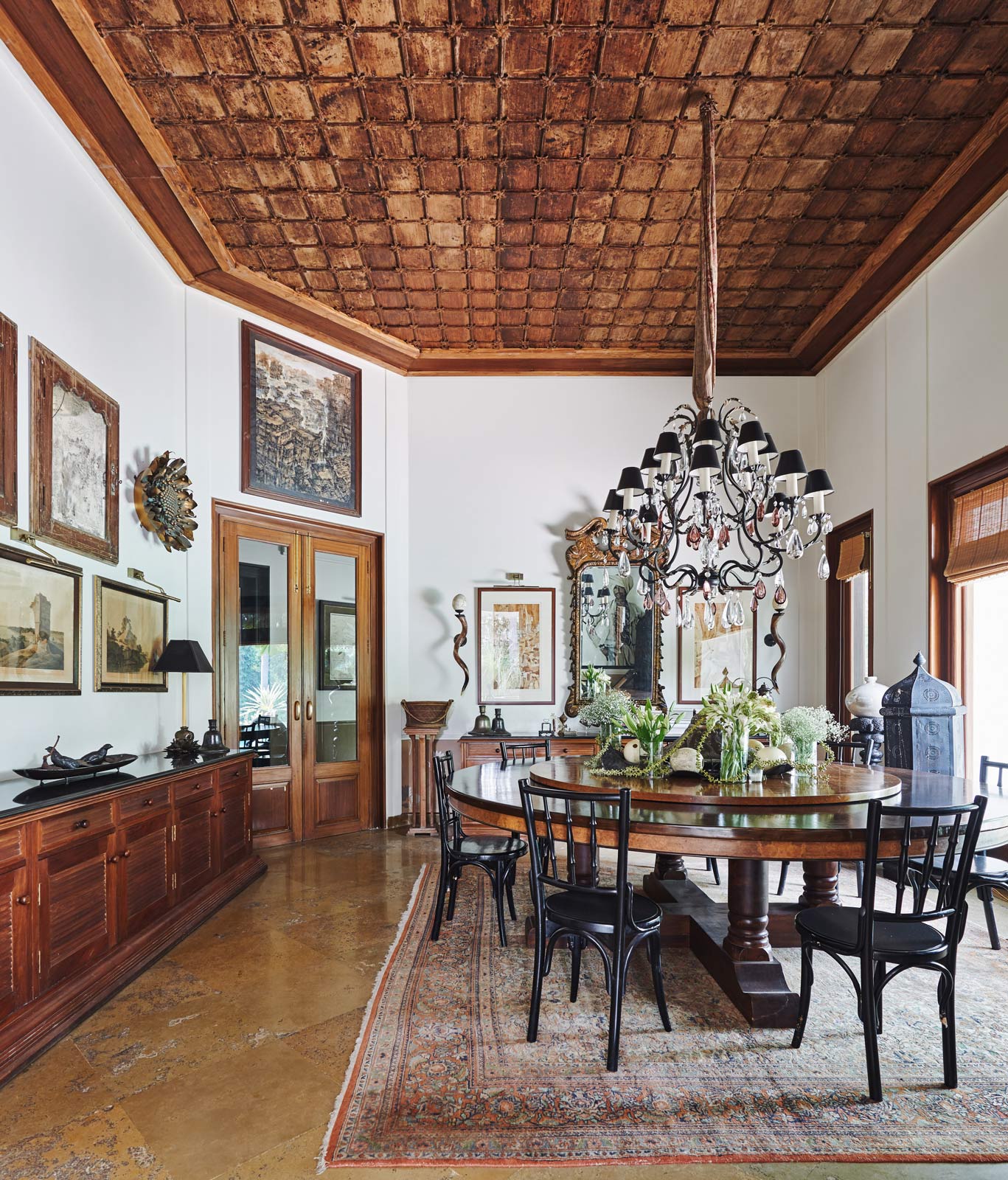 The dining room displays a circular dining table and the Irani cafe chairs, that face towards the swimming pool and garden. Tarun had got the Irani cafe dining chairs authentically reproduced by the master carpenter, Masitullah. The table is decorated with rare cutlery which includes a collection of ostrich eggs surrounding traditional metalware, and the large shells used as salad plates. Moreover, the wooden ceiling of the dining room is a replica of the ceiling from one of Gujarat’s haveli. Apart from it, the gilt mirror above the sideboard is a copy of a Versailles design that Tarun had found in New York. With that said, the dining room is an interesting mix of many styles. 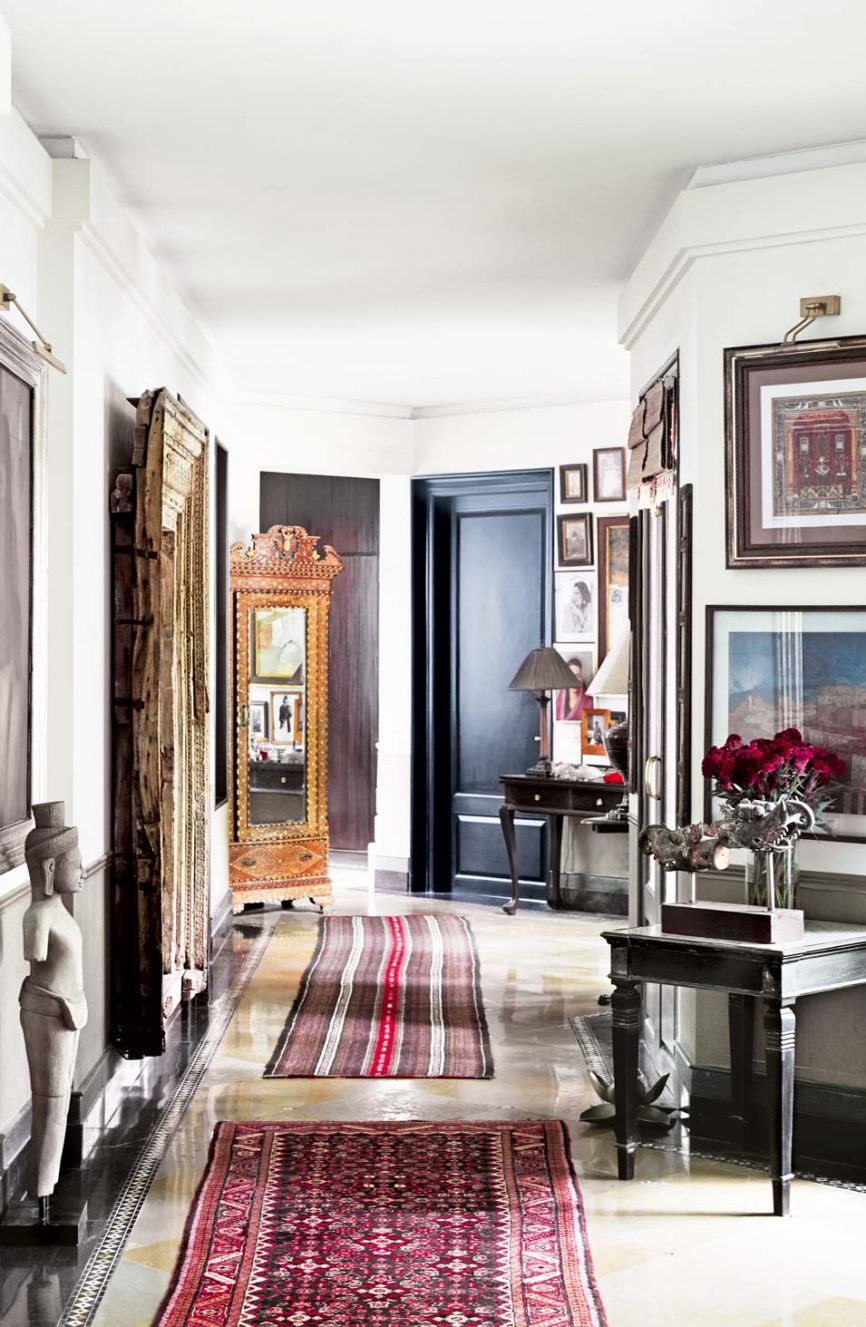 Peppered with family portraits, cinematic moments from the early days of fashion in India, prized artworks and awards, the wall of the central corridor displays some of the favourite moments of Tarun's life. The wide central corridor has Shahabad stone flooring. Moreover, it is transformed into a gallery that showcases a medley of antiquities including Turkish rugs, an ornate inlaid armoire, a South-East Asian sculpture, and a pair of rare bronze water spouts from southern India. The corridor further leads into a serene living room, dining room, a study and bedrooms. 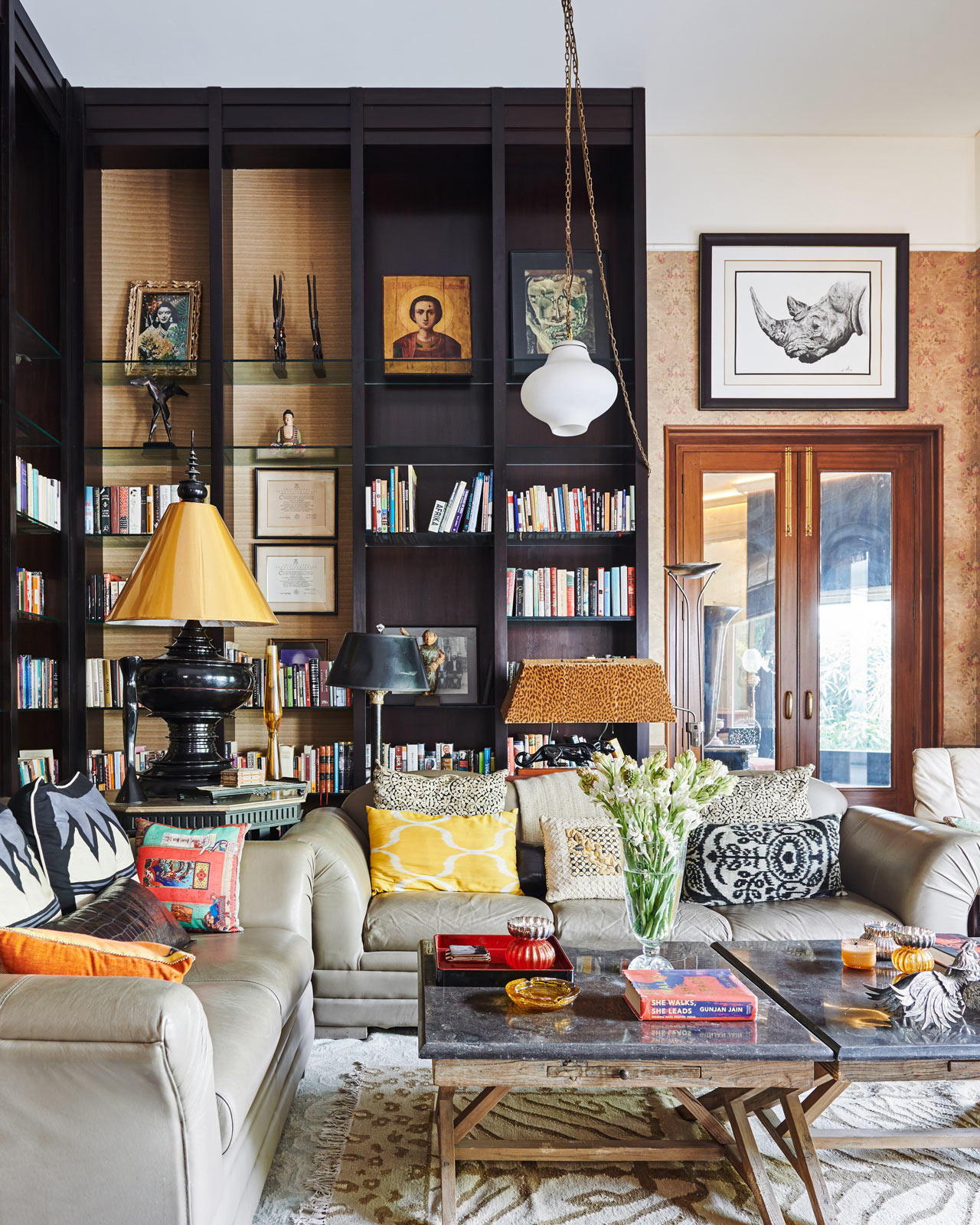 The family room is a place where the entire Tahiliani family sits together every day after their meal. However, on the weekends, the family spends much more time at home, lounging around the family room reading, chatting or watching the latest by John Oliver. The family room has a cosy atmosphere and exudes positive energy due to its subtle interiors. Moreover, an expansive library set against a fabric-covered wall acts as a dramatic backdrop to the neutral coloured upholstery. Apart from that, there is a large TV on one of the walls, for the Tahiliani family's binge sessions after the meal. 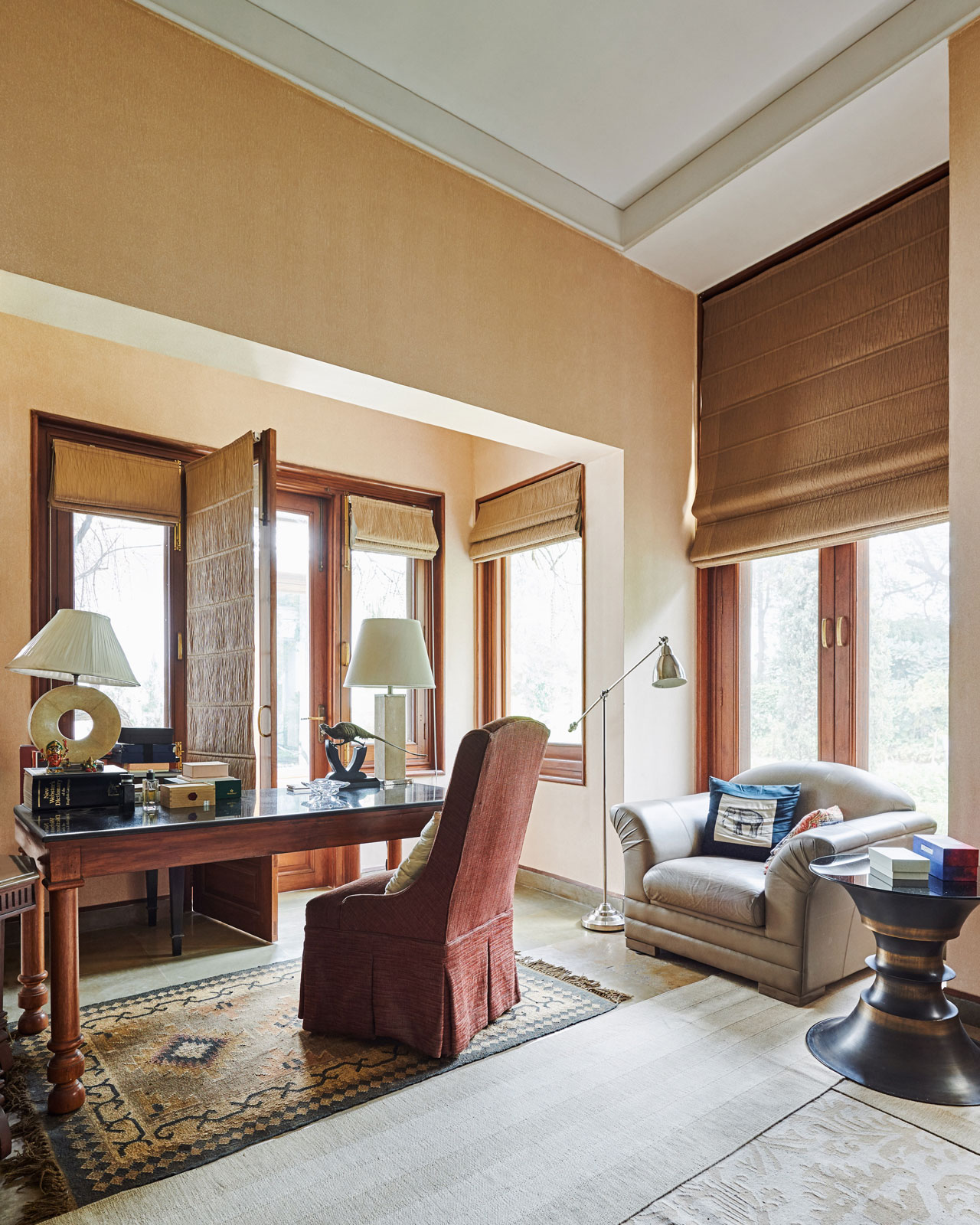 The designer's study room exudes relaxing vibes with ceiling-high shelves covered in fabric, a delicatel patterned earth-coloured wallpaper on the walls, and grey leather sofas. Tarun Tahiliani’s study leads to a wide veranda, where he can enjoy positive energies around him, after a stressed day at work. The most attractive element of the room is the panther ceramic lamp, that Tarun had bought from a New York flea market. Moreover, the colonial period tables and unique doors are faithful reproductions made by his master carpenter, Masitullah. 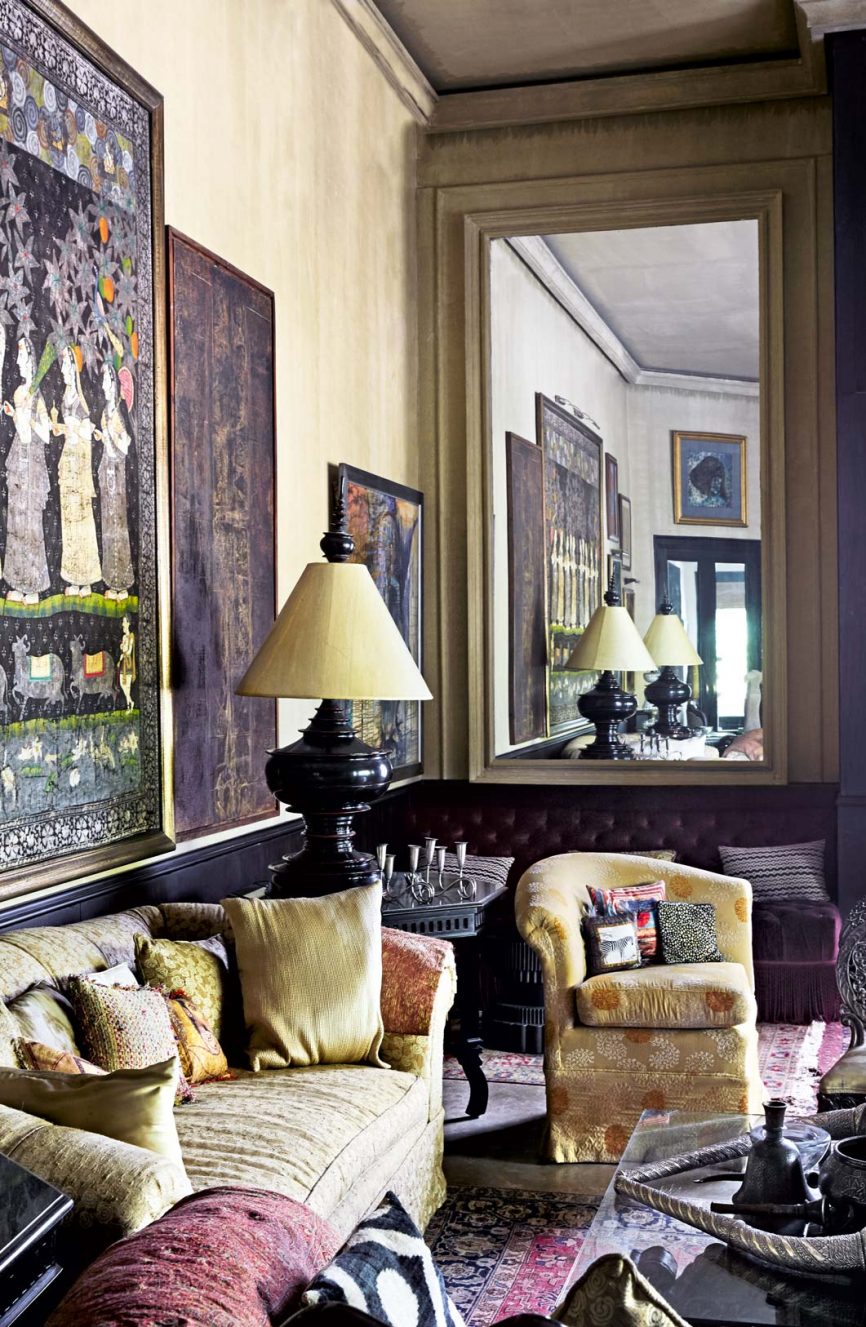 The living room features a sofa whose armrest is draped in Tahiliani’s mother’s wedding saree, and large antique pichhwai panting on the wall. The screen-printed cushion covers feature artworks of famous artists, Rabindra and Amrit Kaur. The mirrored panels and painted dados are yet another interesting element of the area. 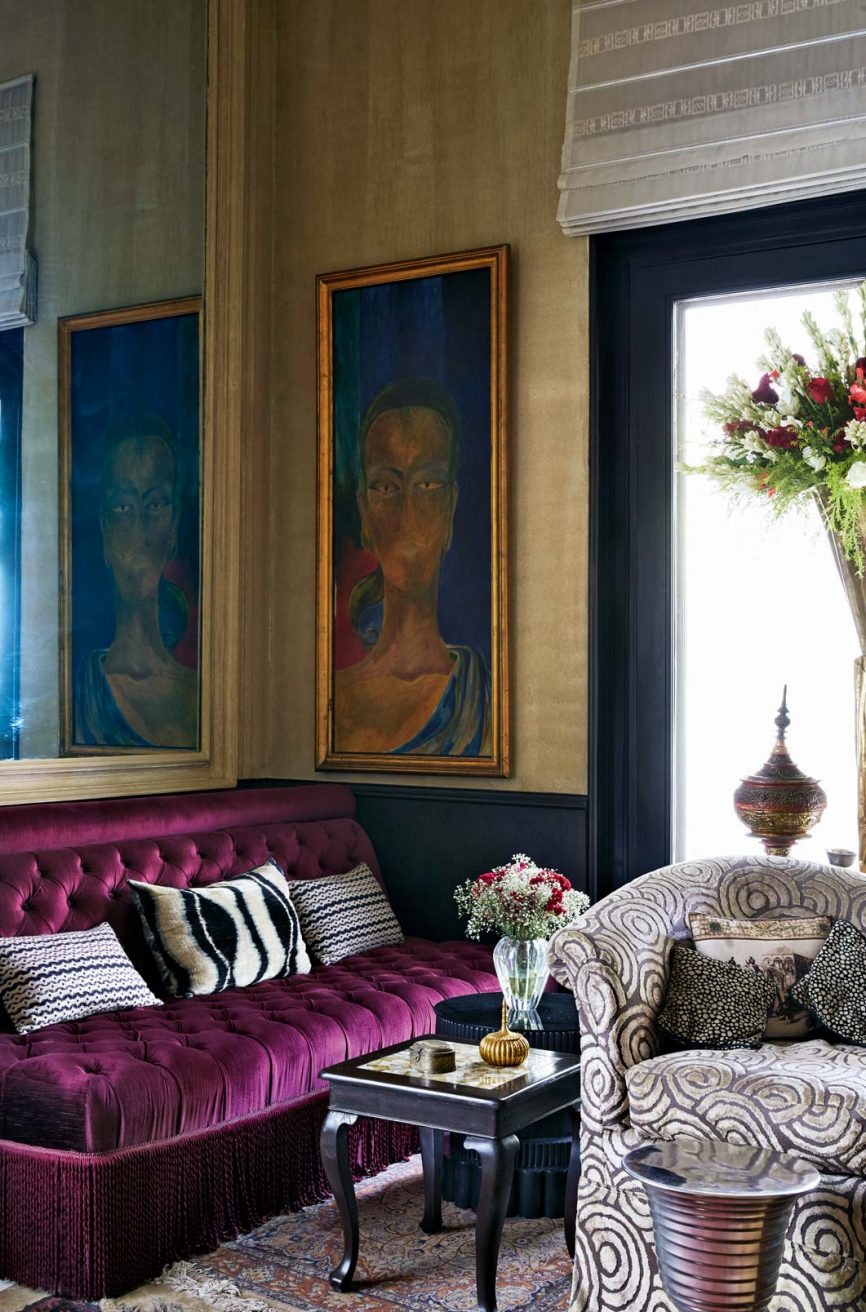 The window seat in the living room corner is a velvet-upholstered banquette custom-made by furniture designer, Arun Tandon. Moreover, the circular mirror-topped table is from Viya Home and the main wall is covered with personal memorabilia and treasured artworks that Tarun collected from different artists and geographies. These include photographs of his mother Jaswanti, and wife Sailaja, artworks by artists like Ram Kumar, Bharti Kher, and a photographic retake of Amrita Sher-Gil by Vivan Sundaram. 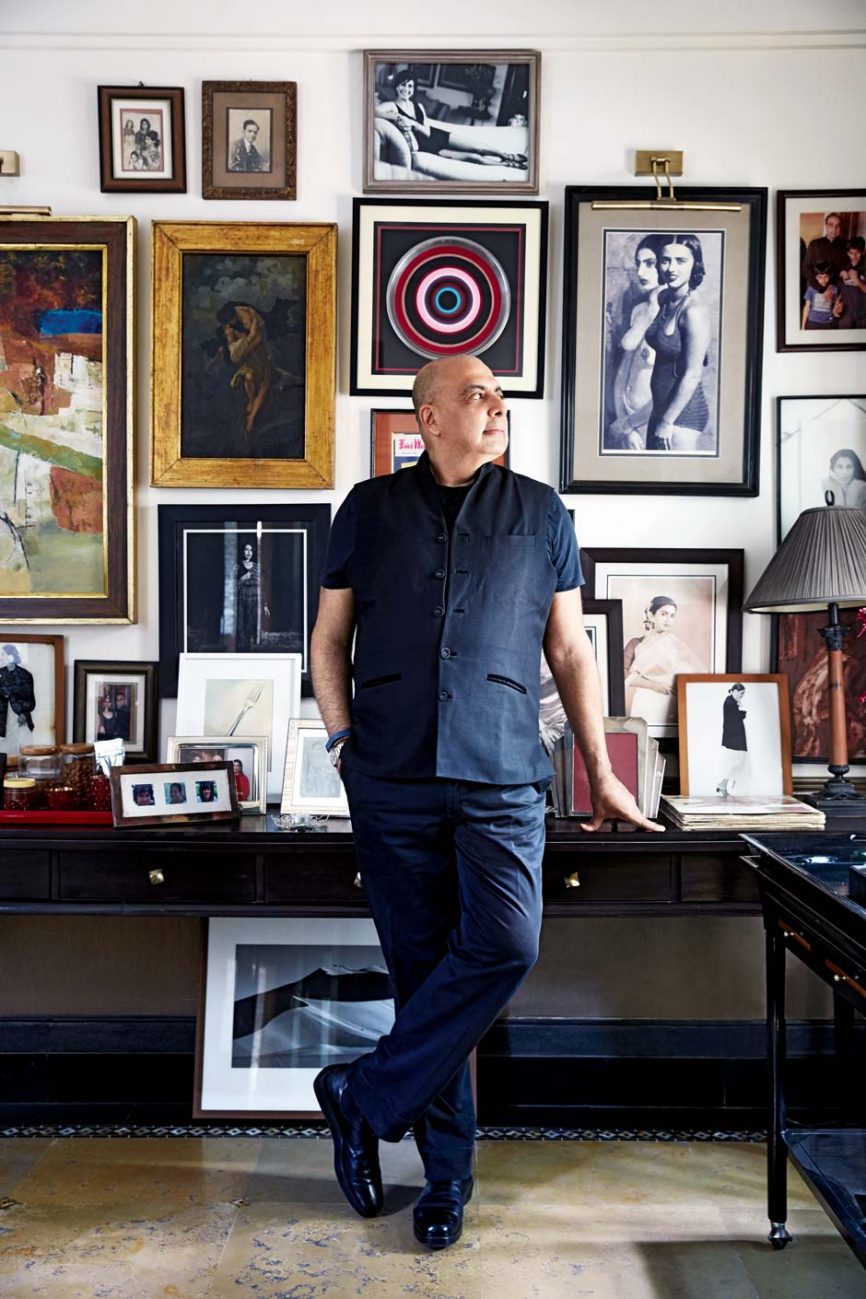 In a report by Architecture Digest, there is a beautiful depiction of Tarun Tahiliani's living room which says: 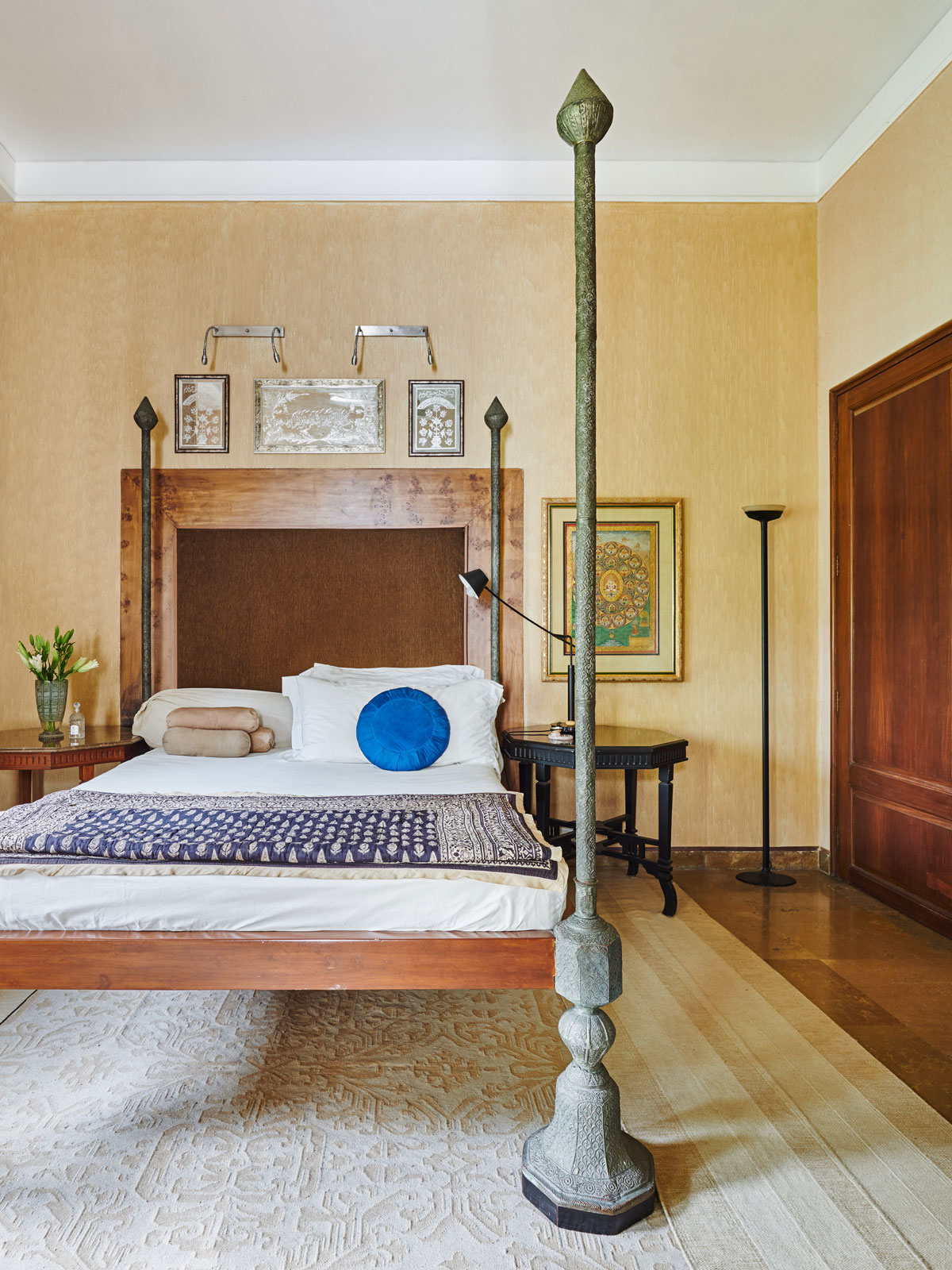 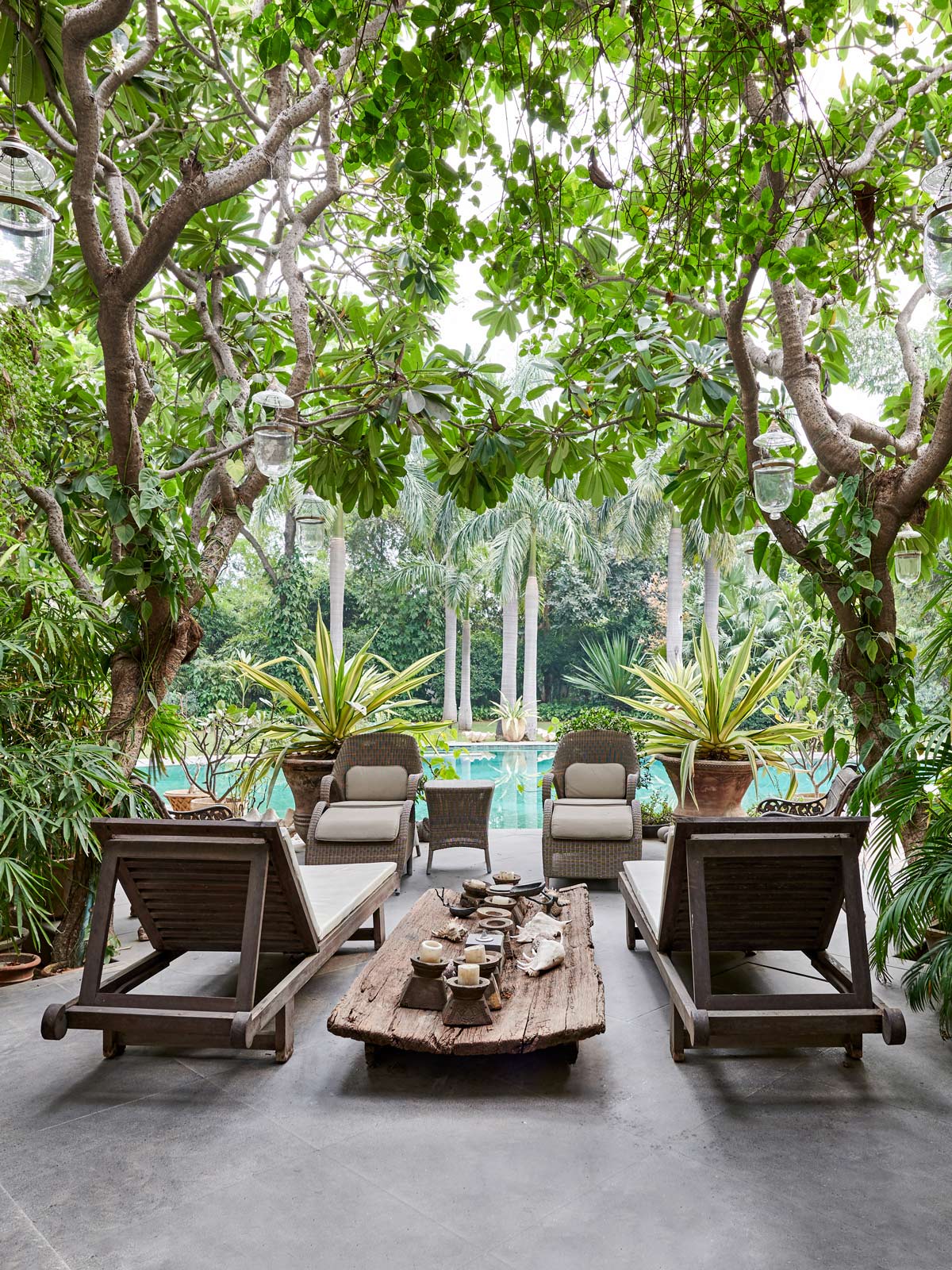 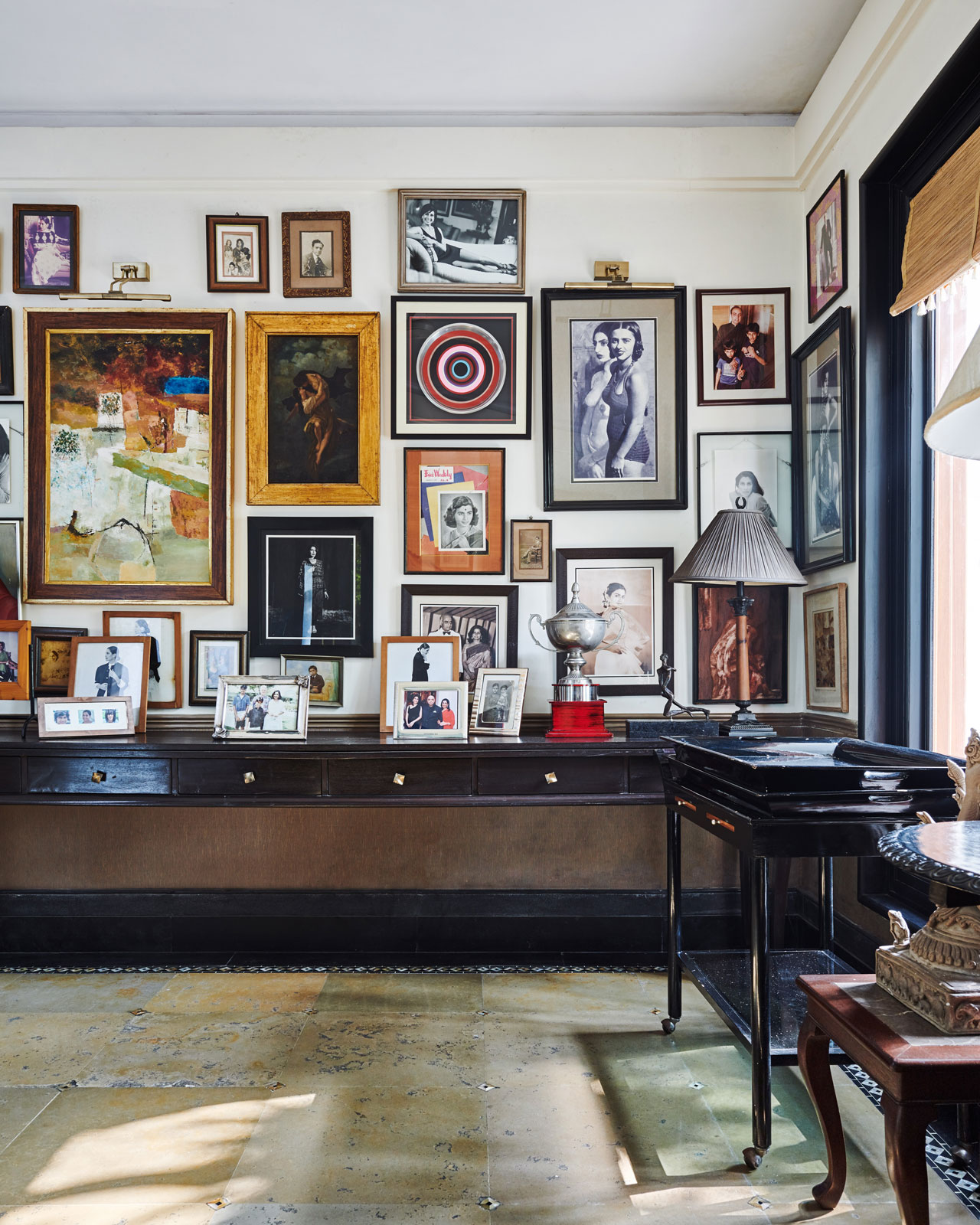 Undoubtedly, Tarun Tahiliani's home is the perfect reflection of his personality, tastes and inspirations!