Raveena Tandon too, with a series of tweets, questioned the workplace harassments and expressed her strong opinion on the issue. Raveena, in one of her tweets, questioned the celeb wives who remain silent observers, while their husbands flirt with other actresses and destroy their careers. She wrote, "What defines harassment in a workplace? The fact that many industry wives/girlfriends are silent observers or instigators, when actor husbands destroy the actresses careers after the chase and flirtation is over, have them replaced with other potential targets?". 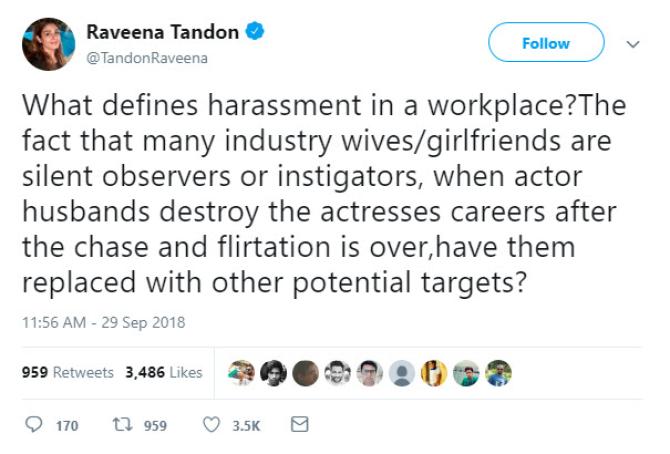 However, social media users derived their own opinion from Raveena’s tweets and jumped to the conclusion that her tweet was hinted towards her ex-Akshay Kumar and his wife Twinkle Khanna. Unable to understand this co-relation and being disappointed with such reactions to the tweet which questioned the industry harassment in general, Raveena slammed the Twitteratis. (Also Read: Raveena Tandon's Tweet On Sexual Harassment Might Be A Hint At Ex-Akshay Kumar And Twinkle Khanna) 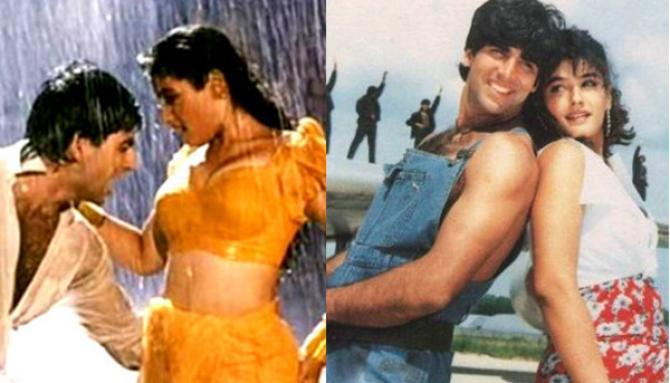 To hit back at the trolls, Raveena tweeted, “Some not so clever people making a connect without any knowledge of past. My observations are not my life alone. Its all what I’ve seen happen to women around in my industry. Colleagues and friends. Not targeting any one person. Infact remained friends did movies.” 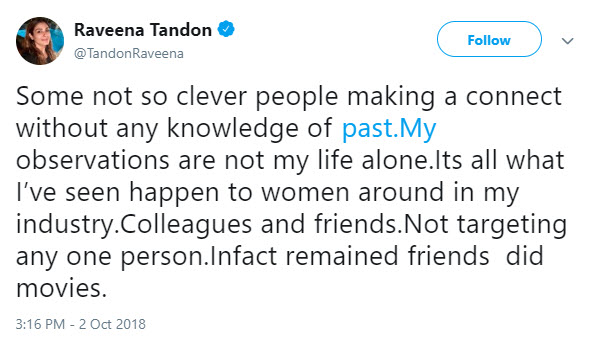 In her initial series of tweets, Raveena had also shared, “When our industry fails to stand for and protect its own. They get their chance and lose it. Makes our films on women empowerment hollow. The deafening silence on #TanushreeDutta case is sickening. remember the controversy breaking out. (part 1)” She went on to say, “Sadly no witnesses or proof. So one couldn’t say. But obviously for her this has been a life changing incident. I’ve worked with Nana too, (Mustafa) had heard about his volatile temper, but never witnessed it. In fact he was courteous and helpful. (part 2)” 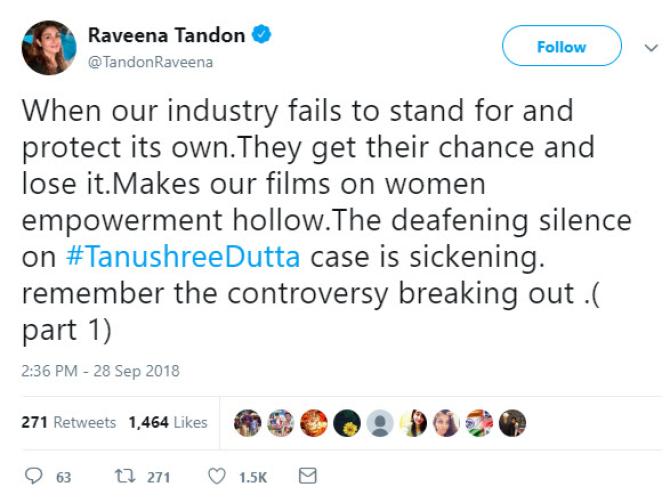 Raveena continued, “Today there is social media, a lot more information given,10 years ago mostly people would rely on the gossipy magazines which carried scandalous headlines to sell. One didn’t know the difference between reality and yellow journalism. (Part-3) #TanushreeDutta” Her tweet finally concluded, “It’s time witnesses came forward and stood by her, unafraid of the consequences, and let the law take its own course. We should not judge and media lynch. lets put our faith in the judiciary and let justice unfold. Innocent till proven guilty. (part4) #TanushreeDutta”. And the latest update in Tanushree Dutta and Nana Patekar feud, the former is under police protection after she received multiple threats of violent attack. She has received two legal notices, and Nana Patekar and Ganesh Acharya will have a press conference on October 8, 2018. And filmmaker, Vivek Agnihotri’s lawyer had released a press statement wherein they had claimed all the allegations by Tanushree to be false. (Also Read: Here Is Why Akshay And Raveena Never Got Married To Each Other, Even After A Secret Engagement) 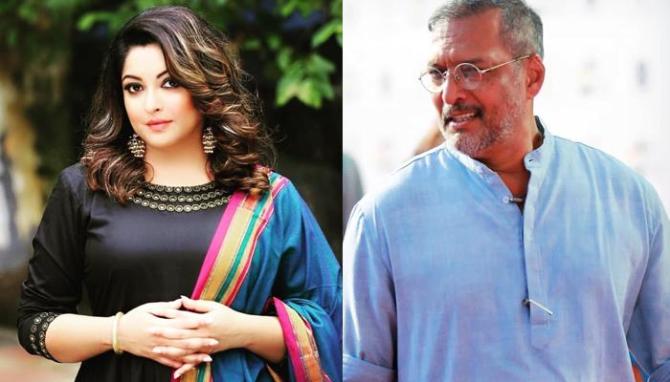 Let’s see what the accused, Nana Patekar and Ganesh Acharya have to say in their press conference on October 8, 2018, about Tanushree Dutta’s allegations on them.