While the #MeToo movement brought down many renowned names in Hollywood, things started heating up in Bollywood as well ever since Aashiq Banaya Aapne fame Tanushree Dutta opened a can of worms from her past. A lot has been said and written about Tanushree’s accusations on Nana Patekar for sexual harassment, on the sets of Horn ‘Ok’ Pleassss ten years ago. She did talk about it earlier also, but at that time, no one supported her. (Also Read: Nana Patekar Reacts To Tanushree Dutta's Allegations, Farhan, Twinkle, Priyanka Support Actress)

But this time, Farhan Akhtar, Priyanka Chopra, Swara Bhasker, Renuka Shahane, Richa Chadha, Sonam K Ahuja, Twinkle Khanna, Raveena Tandon including others came forward to take their firm stands regarding the issue. While the Tanushree Dutta and Nana Patekar feud is at its peak, a throwback video of Dimple Kapadia has surfaced on the internet, and after Tanushree’s allegations on Nana, the video seems to be more significant. 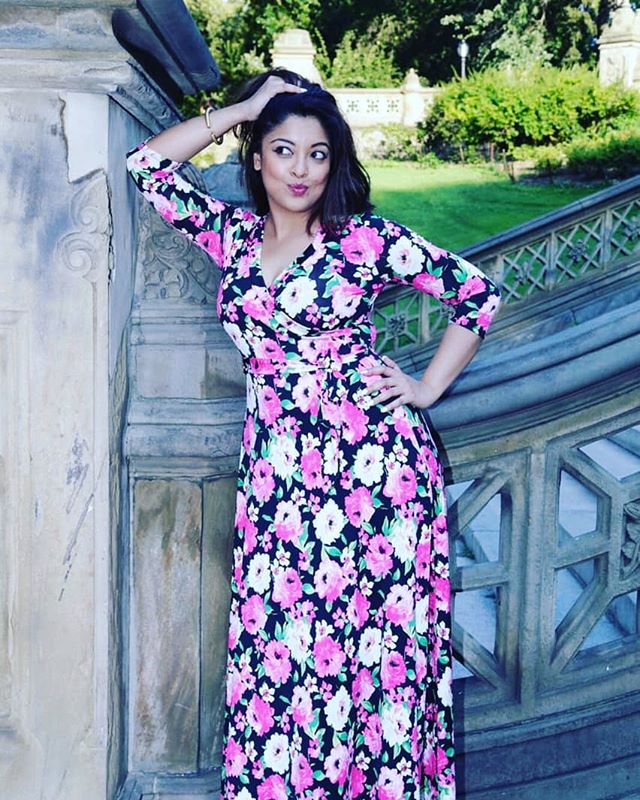 The 8-year-old video that is going viral on the internet, Dimple gets in a candid chat with critic Anupama Chopra, wherein the actress talks about her Angaar co-star, Nana Patekar’s temperament. When Anupama asks Dimple if Nana has mellowed down, she revealed, "I think he is obnoxious." When further probed if it was in a good or a bad way, Dimple hesitatingly answered, "In a good and a bad way." Adding further, the Bobby actress stated, "As far as his talent goes, there's no match to him. He is an extremely talented man. When I see talent like him, sau khoon maaf hai. Sab kuch maaf hai. Meri jaan bhi lelo. (When I see talent like him, 100 murders are forgiven. Everything can be forgiven. Take my life too). That's the effect he has on me. But, as a person, with me he has been very, very nice, kind and a good friend. But I have also seen his dark side. We all have a dark side which is nicely and safely kept aside." Here’s the video:

Nana Patekar's "dark side" has always been an open secret in Bollywood.

Nana Patekar always had a stormy relationship with his alleged girlfriends, Manisha Koirala and Ayesha Jhulka and also his wife, Neelakanthi Patekar. In case you want to read about Nana’s relationship with his Khamoshi co-star, Manisha Koirala and how the trouble triggered in their paradise, click on the following link. (Read: Separated From Wife, Nana Fell For Manisha But Never Married Her Or Divorced His Wife) 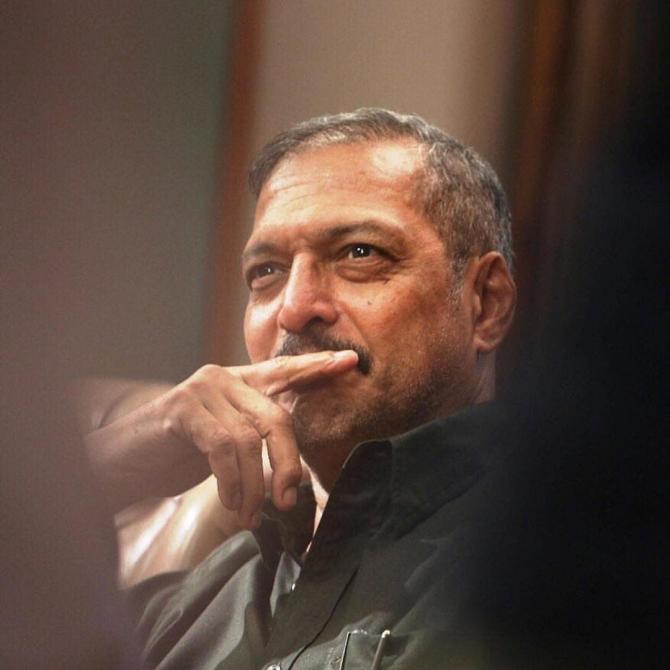 Dimple Kapadia’s daughter, Twinkle Khanna too took a stand for Tanushree when people were shaming her for the accusation against Nana. Twinkle Khanna retweeted journalist Janice Sequeira’s tweet as the first-person account of the incident, and wrote, “Please read this thread before judging or shaming #TanushreeDutta a working environment without harassment and intimidation is a fundamental right and by speaking up this brave woman helps pave the way towards that very goal for all of us!” 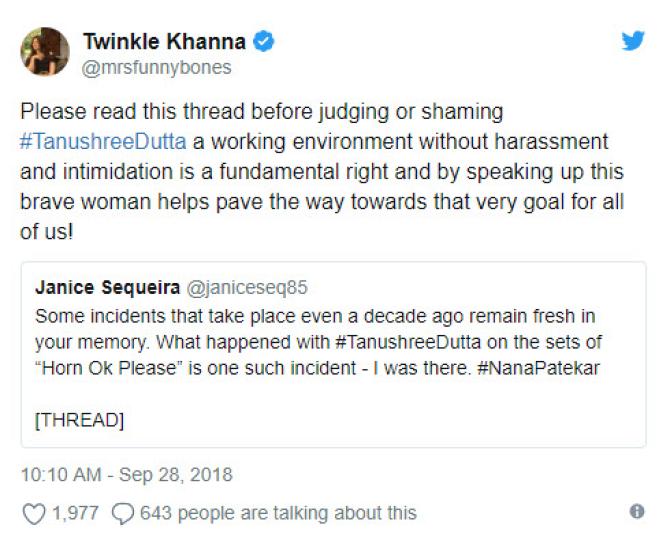 While Tanushree is happy with Bollywood’s support for her and the positive response that she is getting, she questioned Twinkle’s support when her husband, Akshay Kumar is busy shooting Housefull 4 with Nana Patekar. Replying to the author’s tweet, Tanushree reacted, “Thank you, ma’am, for supporting me but your husband (Akshay Kumar) is about to or is even shooting the film (Sajid Khan’s Housefull 4) with Nana Patekar. What about that? That is the question I am asking and how much of that support is genuine because it doesn’t result in any kind of disciplinary action.” 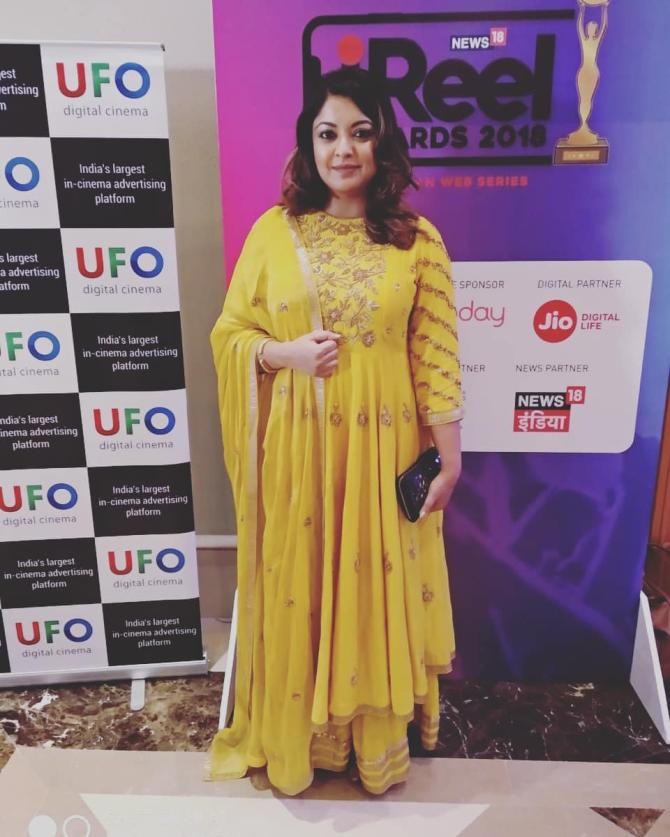 Not only Twinkle, but Tanushree also reacted to Priyanka Chopra’s tweet referring to her as a ‘survivor’, and said, “Well, it’s amazing. She (Priyanka) has finally decided to join the bandwagon. It’s probably a smart thing to do at this point of time. But I just want people to know that I am not going to be reduced to a survivor. I have a name, I have a story and I have this truth that I am trying to get out because it’s not for me but for people who will come forward in the generations to come.” 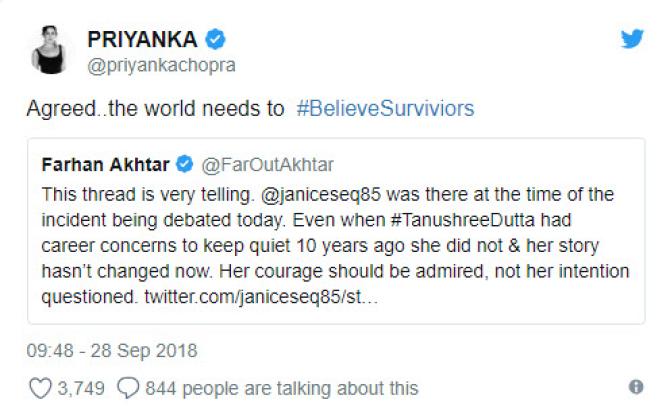 Speaking about Nana in an interview, Tanushree shared, “They have not apologised to me and they are already spinning lies so when you go ahead and work with them they have the sense of victory”. (Also Read: Raveena Tandon's Tweet On Sexual Harassment Might Be A Hint At Ex-Akshay Kumar And Twinkle Khanna) 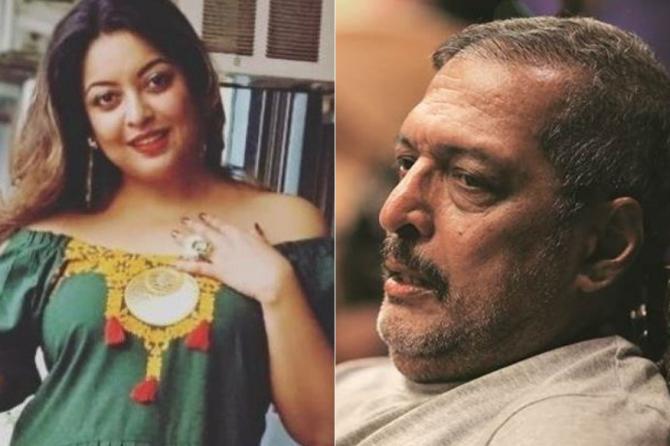 What are your thoughts about Dimple Kapadia’s interview? And what are your opinions on Tanushree Dutta and Nana Patekar feud? Drop us a comment below.