Just recently, one of the famous actresses of Bollywood, Tanushree Dutta made some shocking revelations against Nana Patekar. She made some blasting sexual harassment allegations against him that shocked not only his fans but a lot of industry people as well. Tanushree shared that she was sexually assaulted by Nana on the sets of 2008 film Horn ‘OK’ Pleassss. She even went on to accuse him of misbehaving with her verbally as well as physically while shooting for a song of the film. The controversy has already flared up and might soar a bit higher in the coming few days. (You May Also Like: Anushka Sharma-Virat Kohli, Varun Dhawan-Natasha Dalal Came Hand-In-Hand For 'Sui Dhaaga' Screening) 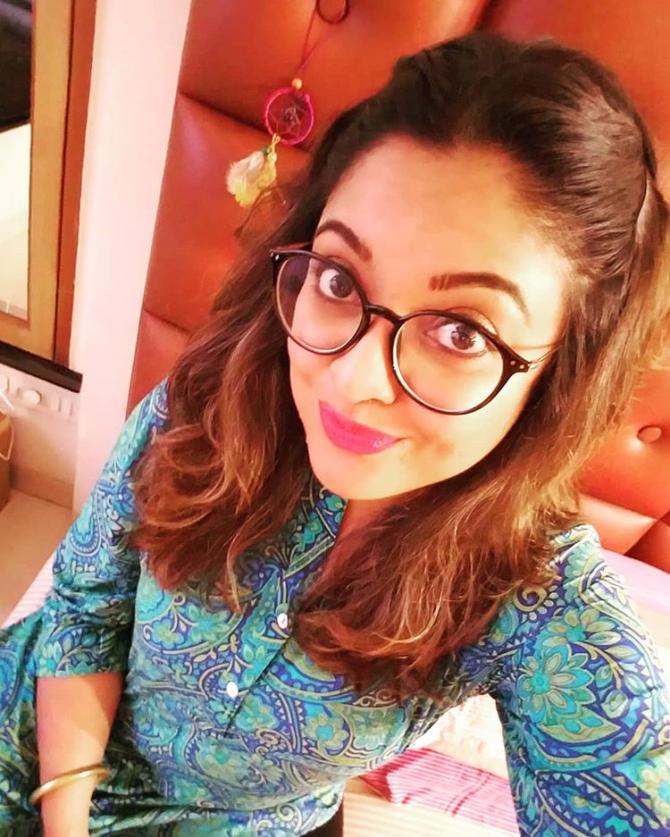 After those serious accusations, famous portal Mumbai Mirror got in touch with the actor to know the other side of the coin. In a conversation with the journalist over a phone call, Nana Patekar dismissed all those allegations made by Tanushree Dutta. The actor first laughed off when asked about the accusations and said, “What does she mean by sexual harassment? We were on the set and there were 200 people sitting in front of us.” The National Award-winning actor further said, "Let anyone say anything. I will continue to do in my life what I have been doing." He signed off by saying, "I will see what can be done legally. Let's see. It is also wrong/inappropriate to talk to you (media) since you publish anything."

After sharing this incident on the sets of Horn ‘OK’ Pleassss, Tanushree also revealed another harassment incident that took place with her on the sets of another movie named, Chocolate. For the ones who don’t know, Tanushree entered in the films through her film Aashiq Banaya Aapne in 2005 and in the same year she did another movie, Chocolate. Though the film tanked at the box office, she shared that she had faced sexual harassment there, by the film's director Vivek Agnihotri. As per the allegations made by her, Vivek Agnihotri told her, “Kapde utaar ke naach uske saamne' (Remove your clothes and dance in front of him).” This was the scene where she was not even required to be a part of. Intervening here, the co-stars, Irrfan Khan and Suniel Shetty supported her. 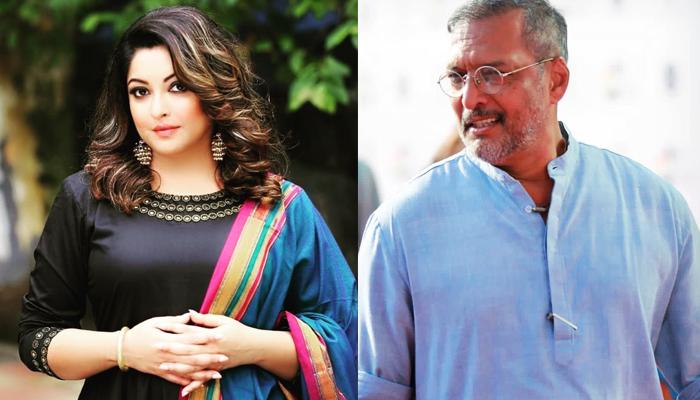 Also, the latest buzz is that one of the witnesses of the incident on the sets of Horn ‘OK’ Pleassss, senior journalist, Janice Sequeira (who was a journalist at that time), tweeted the entire scene. Here are the excerpts from her tweet, “When I reached the set, my cameraperson told me that there was a lot of tension on set because the actress is angry and upset about something, and shooting had been halted. We entered the set, which had been designed to resemble a bar. But there was no activity; everything was set up but the dancers were sitting around. Tanushree was sitting, wrapped in a shawl, looking very upset. I could see that Nana Patekar, Ganesh Acharya, and the producers, were having a private conversation at a corner of the set. It looked like there was some inside joke going on. However, this could be pure conjecture.” (Also Read: Bollywood's Step-Brothers And Step-Sisters And The Unusual Relationship They Share With Each Other) 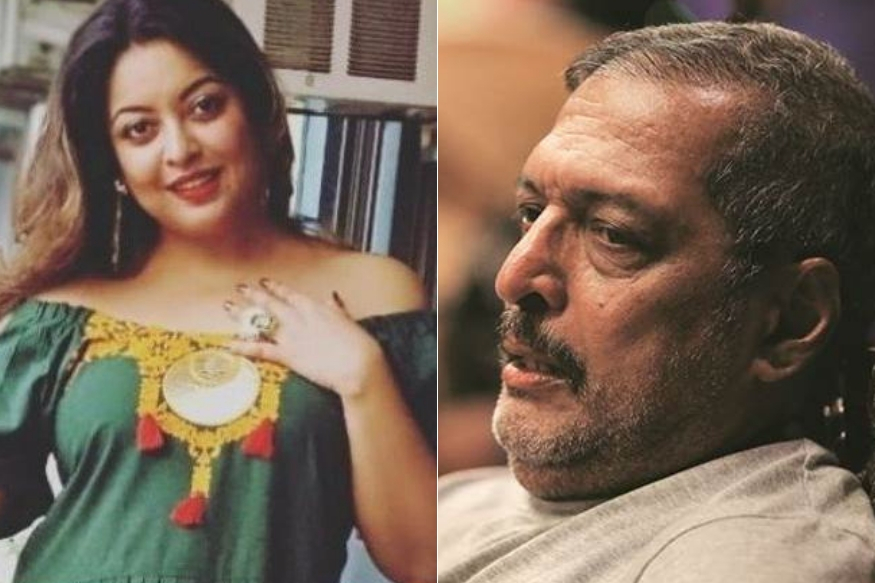 She further wrote, “I was sitting by the monitor and could see Tanushree having great difficulty with her expressions - it looked like she was either going to hit someone or cry. Then, the crew tried to do a couple of rehearsals before taking the main shot; when Nana Patekar entered the set, and while I don’t remember his exact movements (it seemed one of those typically vulgar steps), it was right after it that she stormed off the set. She just walked out and there was sudden chaos, no one could understand what was happening. About an hour later, we realised that she had locked herself in the vanity van, by which time some strange people arrived on set, some of them had tikka on their foreheads. I was told later that they were some members of some political party.” (Also Read: Arjun Kapoor Opens Up About 'Baba' Ranveer Singh And Deepika Padukone's Wedding) 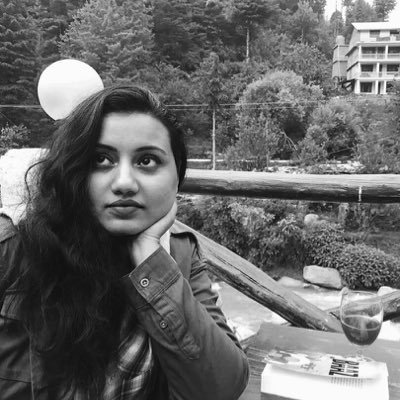 She also shared, “And then, in the middle of all of this, when things started picking up the heating, Nana Patekar exited the set, and went to his own vanity van. My cameraperson was, unfortunately, taking shots of the protestors but I managed to catch up with him (Patekar). He saw the boom in my hand and must have thought I was recording, though I wasn’t. Without my even asking him a question, his first reaction was 'Meri toh beti jaisi hai' (she is like my daughter). At that time I didn’t even know everything that had happened, and so I wondered why he would say something like that. Meanwhile, her parents somehow managed to get Tanushree into the car. Those people had broken her car’s windshield and dented it. The police ended up escorting the vehicle out.” 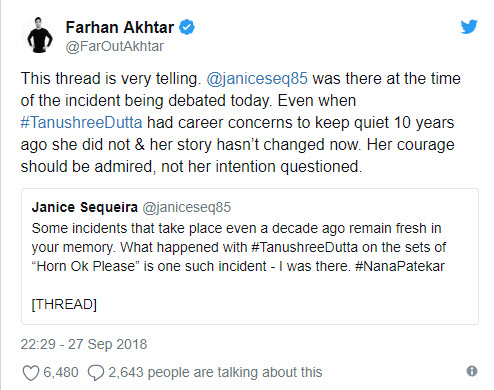 To this tweet, Bollywood actors namely, Farhan Akhtar, Richa Chadha and Swara Bhasker went on to tweet on the thread in support of Tanushree. Farhan wrote, "This thread is very telling. @janiceseq85 was there at the time of the incident being debated today. Even when #TanushreeDutta had career concerns to keep quiet 10 years ago she did not & her story hasn’t changed now. Her courage should be admired, not her intention questioned."

Richa tweeted, "It hurts to be #TanushreeDutta rn. To be alone, questioned. No woman wants the publicity that opens the floodgates of trolling and insensitivity. What happened to her on set was intimidation. Her only fault was she didn’t back down-takes a special courage to be #TanushreeDutta.” Actor Swara Bhasker posted a video on Twitter with the caption, that could be read as, “#IBelieveYouTanushreeDutta.”

Priyanka, on the other hand, re-tweeted Farhan's tweet and wrote, "Agreed..the world needs to #BelieveSurviviors." Despite the fact that Tanushree earlier shared that actors like Akshay Kumar still work with Nana Patekar, Twinkle has come out in support of the actress and wrote, "Please read this thread before judging or shaming #TanushreeDutta a working environment without harassment and intimidation is a fundamental right and by speaking up this brave woman helps pave the way towards that very goal for all of us!" (Check Out: Amitabh Bachchan And Katrina Kaif Are Very Upset For Not Being Invited To Ranbir Kapoor's Party) 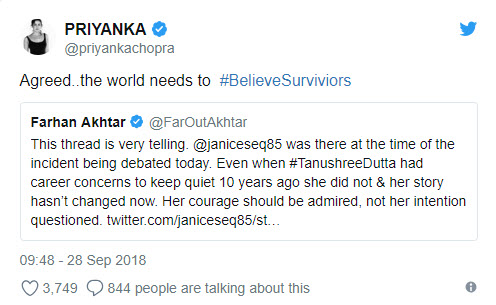 Well, this war is heating up with each passing day. What do you guys think about the same? Do share your views with us in the comments section below!