The BFFs Rashami Desai and Devoleena Bhattacharjee got into a conversation and spilt secrets about each other. Check out the deets inside! 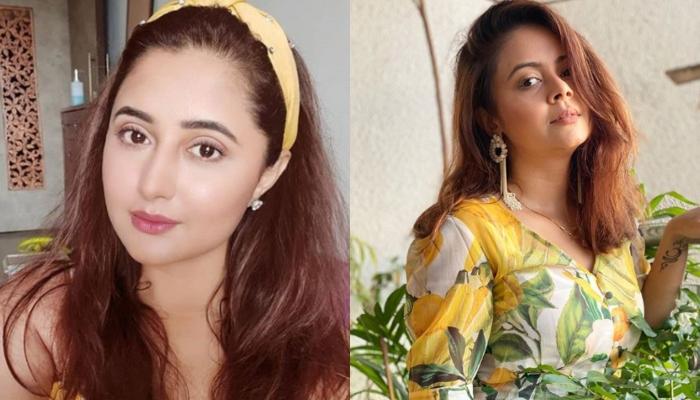 It's a common saying that two actresses can't be friends in the glamour world because of the cut-throat competition and the fact that relationships are made here on the basis of benefits. But, time and again, strong friendships have proved it wrong and have stood strong in adverse conditions. Today we're going to talk about two such best friends and the secrets they revealed about each other. Devoleena Bhattacharjee and Rashami Desai had met in the Bigg Boss house for the first time and instantly hit it off. In an interview with SpotboyE, they talked about their relationship and their secrets. Check out the excerpts from the same below! (Recommended Read: Abhishek Bachchan's 1 Lakh Donation To Farah Khan's Daughter, Anya For Her Sketch Is Winning Hearts)

When asked what was Devoleena's first reaction when she saw Rashami in the house of Bigg Boss, she revealed she was not very sure how would they get along in the journey, although she had wanted Rashami to feel special and had thought of welcoming her by giving her a flower for the same. Rashami then cordially revealed that she had kept that flower with her till the end. Rashami then went on to praise Devoleena for giving her such a warm welcome and instructing her about the whole house as to what is kept where. She emphasised that Devoleena was the sole reason she felt so comfortable in the first place.

Further, talking about how did their friendship developed over time, Devoleena said, "I think naturally jo cheezen hotin hain, without any expectations, jo rishte without any reason bante hain, wo purity dikhti hai unme. Toh wo naturally tha, isliy hmari friendship itni strong hotoi chali gayi." Rashami also weighed in by saying, "Devoleena was the only contestant I felt a connection with and honestly she seemed like a part of me, and mere bina bole hi meri bohot sari cheezen samjhana aur infact mai bhi uske bina bole samajh jati thi ki acha Devo ko gussa aa chuka hai." When asked what is the one weakness of  Devoleena, Rashami cordially replied, "She's very short tempered, but we are there for each other, so it's fine." On the same question, Devoleena retorted, "Rashami's weakness is that she is very non-expressive usko bura lagta hai, ya wo kisi se naraz hai, ya kisi ne usko kuch bol diya, toh wo react nahi karti jaldi."

Rashami also talked about how difficult it is for her to trust someone and connect with someone but with Devoleena, the connection was instant. The BFFs also cracked into laughter remembering about the time when they were eliminated from Bigg Boss and no one was sad, in fact, everyone was happy that those 'two headaches' were no longer a part of the house. Rashami also went on to agree with the fact that she has become stronger ever since Devoleena entered her life. On being asked how many time they call each other every day, Rashami complained, "Devoleena ko 10 call karo, toh jaake wo 2 uthati hai." To which, Devoleena tried to explain, "Nahi Nahi aisa nahi hai, mai karti hu toh madam miss kar deti hain, madam karti hain toh mai miss kar deti hu, but I always call her back." (You May Also Like: Sushmita Sen Creates Meditation Music With Beau, Rohman Shawl And Daughters, Renee And Alisah)

Rashami also revealed a fun side of Devoleena, when she said, "If I don't receive her calls or reply to her messages, she will tweet ki 'message dekho', 'call karo' and tag me in those tweets, and then my Twitter gets bombarded with comments like, 'call Devoleena', 'message Devoleena' oh god!" When asked if they have given any nicknames to each other, Devoleena instantly replied, "I call Rashami Mithhoo because she's sweet." Rashami also said, "I call her Devo, she's tufani toh isko sweet nahi bol sakte toh I call her Devo." Devoleena also expressed that whoever wants to marry Rashami would have to get her approval as she's very protective of people who are close to her. Wow, what a friendship! (Also Read: Kalki Koechlin Shares A Video Of Herself Singing A Portuguese Lullaby For Her Baby Doll, Sappho)

Here's wishing all the strength to Devoleena and Rashami's bond!