Saas-bahu ka rishta is not that terrifying as it sounds. While along with the bahu tag comes a lot of responsibilities, but a sasu maa is the second mother that a woman gets in her life. When we talk about Bollywood celebrities and the real-life saas-bahu jodis, Rani Mukerji and her mother-in-law, Pamela Chopra gets a special mention.

As many of you would agree and already know, Rani and Pamela share an extremely cordial bond with each other. It was Pamela’s 80th birthday yesterday (July 29, 2018) and the doting daughter-in-law ensured that a bash was hosted for her saasu maa. Famous Bollywood choreographer, Vaibhavi Merchant and Yash Raj Films’ casting director, Shanoo Sharma had attended the party and posted beautiful and similar pictures from their profile. While Vaibhavi captioned the picture as, “Fun night.. Happy 70th Birthday Pam Aunty..wishing you laughter, happiness & health #supernight #celebration #love #girlgang”, Shanoo wrote, “What a night! Happiness always Pam aunty, you are the BEST!!!! @vaibhavi.merchant #rani”. (Also Checkout: Once Kareena Wore Bikini In Front Of Sharmila On A Vacation; This Is How Her 'Sasu Ma' Reacted!) 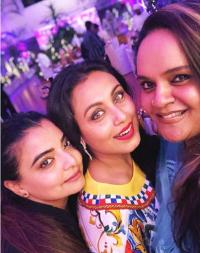 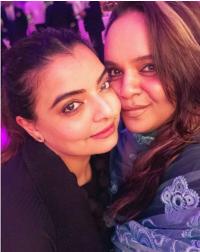 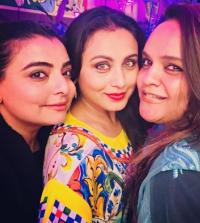 In a throwback interview with DNA, Pamela had shared about her reaction when he first got to know that Aditya Chopra was keen on marrying Rani Mukerji. She had revealed, “When Adi told me he wanted to get married to her, quite honestly, I was surprised. He’s very low profile and my first thought was how can he get married to an actress because stars are very high profile and always in the news. But then he was too much in love with her. Rani makes him so happy and for me as a mother that’s all that matters.” (Also Read: When They First Met, She Didn't Even Come Up To Him: Love Story Of Rani Mukerji And Aditya Chopra)

And read what Rani’s adorable sasu maa has to say about her darling bahu, “Rani is a lovely girl. There are some things that I find very special about her. She is a very down-to-earth girl and extremely respectful of me. We have a very good relationship.” 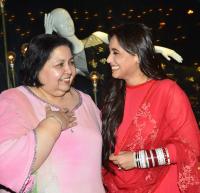 Pamela had also shared about what she felt when she got to know that Rani was expecting and was carrying the Chopra clan’s first lineage. She had shared, “When Adi got married, I knew he and Rani were quite ready to have a baby but then it wasn’t happening. Finally, one day, when Rani got pregnant, Adi took me very quietly aside in another room as we having dinner with other people and told me. Adi said, ‘Guess what? Rani’s pregnant.’ I almost screamed out! You can’t explain that wonderful feeling; and the fact is that you live with that feeling always… Even now when I think about my grandchild, I feel my heart skip a beat and that fluttery feeling in my stomach. My heart is so full of joy!" (Don't Miss: From Gifting Luxury Cars To Mughal Period 'Jadau Set', Neha Marda's 'Sasu Maa' Loves Her The Most)

Aren’t you super happy to see Rani return to films? In a recent interview, Rani shared that Aditya was her driving force behind her return to the silver screen. Here’s what she said, “My husband was after my life from the time my baby was three months old. He said ‘you are getting so consumed. Now you need to get back to work, to your fans, you got to do what you know best’. Adira is going to be with us forever, so you don’t have to alter your life because of that.’ That encouragement helped me because if he had not nudged me or pushed me, probably right now, I would be sitting with Adira, watching some other actress do this interview.” (Also Checkout: Rubina Dilaik Can't Stop Praising Her Cancer Survivor 'Sasu-Maa' At Her 'Sangeet', Calls Her Queen)

We wish Pamela Chopra a belated happy birthday! Rani, we want to see so much more of you! Also guys, what is your favourite Rani Mukerji movie? Drop us a comment below.